The County of Perth is a shire in central Scotland. In the midst of the land, its outlet to the sea is the Firth of Tay, and most of the towns lie near that river. The shire however extends far into the mountains to the north, and Perthshire is bounded and surrounded by nine counties, which may be told anti-clockwise from the Tay, Angus, Aberdeenshire, Inverness-shire (to the north), Argyll (to the west), Dunbartonshire, and to the south Stirlingshire, Clackmannanshire, Kinross-shire and Fife.

The county extends from Strathmore in the east, to the Pass of Drumochter in the north, Rannoch Moor and Ben Lui in the west, and Aberfoyle in the south.

Perthshire is known as the "big county", not so much for its size (though there are but six shires in the kingdom larger), as for the amount fitted in, as to unparalleled variety of towns and countryside. Its landscape includes the gentle coast, industry, rich agricultural straths in the east, to the high mountains of the southern Highlands, a world away from the polite towns of Strathearn.

The parishes of Culross and Tulliallan form an extensive detached part of Perthshire south of the main body, bounded by Clackmannanshire and Fife. Three other detached parts exist, one in the vicinity of Kippen in Stirlingshire and two in Angus, one of which is formed by Broughty Castle.

By far the greater part of the county is mountainous. The district of Breadalbane in the north of Perthshire contains lofty peaks and glittering rivers. Here the River Tay rises in several burns which join in the great Loch Tay from which the River Tay emerges.

Three major inland routes through the Highlands cut through Perthshire: the road from Perth to Strathspey (now the A9) by way of Pitlochry, that from Perth to Braemar and the River Dee, Aberdeenshire (the A93), while in the west of the county Crianlarich is the dramatic meeting point of the A82 and A85.

Strathearn in the south is the valley of the River Earn from Loch Earn to the Tay estuary; a gentler land of farms and modest towns.

The wee island of Mugdrum in the Firth of Tay belongs to Perthshire too.

The Moor of Rannoch on the borders of Argyllshire is a sterile, boulder-strewn waste, and Flanders Moss, to the south-east of Lake Menteith, is a vast boggy tract, which local man have struggled to subdue to cultivation.

Sir Walter Scott wrote of the county in The Fair Maid of Perth in 1828, "Amid all the provinces in Scotland if an intelligent stranger were asked to describe the most varied and the most beautiful it is probable he would name the county of Perth. A native also of any other district of Caledonia though his partialities might lead him to prefer his native county in the first instance would certainly class that of Perth in the second, and thus give its inhabitants a fair right to plead that—prejudice apart—Perthshire forms the fairest portion of the northern kingdom."[1]

The Highland portion of Perthshire is built up of a great series of schists and metamorphosed rocks grouped as Dalradian or Eastern schists, cut off from the Old Red Sandstone, which occupies most of the remainder of the county, by the great fault which traverses the county somewhat to the north of Aberfoyle and Crieff. Near the fault line the Highland schists are less metamorphosed than they are farther north; about Comrie and Callander they consist of shales, greywackes and igneous rocks with radiolarian cherts and black shales. Granite masses appear in amid the schists, as at Loch Rannoch, Loch Ericht and Glen Tilt.

The Old Red Sandstone consists in the lower portion mainly of coarse volcanic agglomerates and lava flows followed by conglomerates, sandstones and marls. The lowest beds are exposed along the crest of the Ochil Hills which, like the Sidlaw Hills are anticlinal in structure. The sandstone is well exposed near the Bridge of Earn and it extends beneath the marine platform of the Carse of Gowrie.

Old high level marine beaches form terraces far up several of the larger streams, and the Carse of Gowrie is formed by the beach at the 50-foot. level. The gravel cones poured out at the mouths of many of the glens which open on the south of the Ochils on to the 100-foot. or 50-foot beaches are often the site of villages. 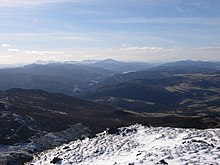 Including the hills on the confines of Inverness-shire and Argyllshire, there are at least fifty mountains exceeding 3,000 feet in height. Of these the best known are: 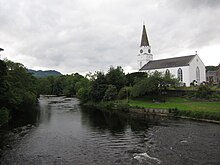 The White Church and the River Earn, Comrie

The principal river of Perthshire is the River Tay, on whose banks Perth stands, just as the river is opening out into its estuary, the Firth of Tay. Many small towns are found on the course of the Tay above Perth.

The Romans came this way: in AD 83, Agricola campaigned victoriously beyond the Forth and in the next year penetrated far to the north, defeating the Caledonians under Calgacus at Mons Graupius; the site of this battle is unknown but Skene thought it to have been fought near Meikleour, south of Blairgowrie, while other writers have placed it further north. At Ardoch are the most perfect remains of a Roman encampment in the British Isles. Ultimately the Caledonians were left to themselves. According to Ptolemy, Perthshire was occupied by three tribes the Damnonii, the Venicones and the Vacomagi. The boldness of the Picts brought the Romans north once more under the Emperor Severus in 208; he reached the shores of the Moray Firth but was unable effectually to subdue the tribesmen. When the Romans finally withdrew from Britain, the Picts established their capital first at Abernethy and then at Forteviot. Abernethy was the centre of the Celtic church after the conversion of the natives by Ninian, Palladius and other missionaries in the 5th and 6th centuries.

The Norse burnt Forteviot in the 8th century and the Pictish capital was removed to Scone. In the latter half of the 9th century Dunkeld to which Kenneth Macalpine had brought some of the relics of Columba from Iona became the scene of monastic activity, the abbot succeeding to the position of the abbot of lona, and exercising great influence for nearly a hundred years.

In 1054, in events made famous by Shakespeare, King Macbeth was defeated at Dunsinane by Siward, Earl of Northumberland, who had invaded Scotland in the interest of his kinsman, Malcolm, King Duncan's son. Three years later, Malcolm took the throne as Malcolm III and the centre of the kingdom began to move to the English-speaking lands of the south. Nevertheless, up to the days of King Charles II, the Kings of Scots were crowned at Scone in Perthshire. Perth succeeded Scone as the capital of Scotland from the twelfth century.

King Edward I of England came to Perthshire and removed of the Coronation Stone from Scone to Westminster in 1296. The shire has long been a battleground: Robert Bruce defeated at Methven in 1306, his son at Dupplin Moor in 1332, Dundee's brief victory at Killiecrankie in 1689 and the indecisive contest at Sheriffmuir in the rebellion of 1715.

In quieter days, Perthshire settled into prosperity, Perth becoming a centre for modest industry and academia. The Victorian era and the coming the new roads and railways brought Perthshire to the attention of visitors and new mountain centres opened, and still prosper, in the shire's wilder places, as Braemar. 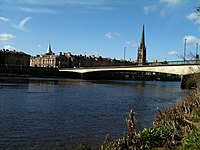 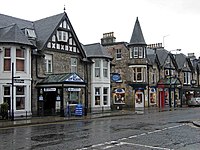 Besides the county town, Perth, other towns and villages in Perthshire include:

Other towns and villages