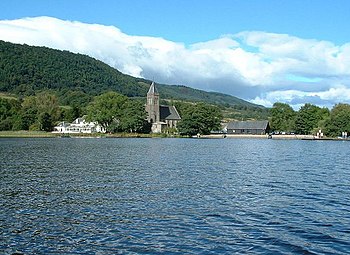 The Lake of Menteith is to be found in southern Perthshire, lying in the Carse of Stirling, the flood plain of the upper reaches of the rivers Forth and Teith, upstream of Stirling.

A number of small islands are found in the lake. On the largest, Inchmahome, is Inchmahome Priory, an ancient monastery. The priory served as refuge to Mary Queen of Scots, in 1547 when, just 4 years old, she was carried away from Edinburgh for safety after the Battle of Pinkie Cleugh. She stayed for three weeks at the priory.

The lake is not particularly deep and can freeze over completely in exceptionally cold winters. If the ice becomes thick enough — at least 7 inches[1] — an outdoor curling tournament called The Bonspiel or the Grand Match is held on the loch. The event can attract thousands of curlers despite its rarity. The last Grand Match was held in 1979. The planned 2010 Bonspiel was abandoned on health and safety grounds.[2]

The only village of any size on the Lake of Menteith is Port of Menteith.

The lake is named from the traditional district, Menteith, in which it lies.

The Lake of Menteith is often cited as the only body of water in Scotland that bears the name “lake”. It is the only sizable lake to bear that description although there are several others to be found (including Raith Lake in Kirkcaldy and four small artificial lakes: Pressmennan Lake, the Lake of the Hirsel, Lake Louise within the grounds of Skibo Castle,[3] and Cally Lake near Gatehouse of Fleet). There is also a sea bay near Kirkcudbright known as Manxmans Lake.

Nearly all other major bodies of water in Scotland are known as lochs. This was not always the case and appears to result from a late rationalisation of nomenclature. The name “loch” is found on early maps for the lakes even in counties which have not had Gaelic-speaking populations, and it appears to be the plain Gaelic word, not a derivation of the Old English luh. On the other hand, the word “Lake” is found widely – even the great Loch Ness is described as the “Lake of Ness” on a Herman Mioll map (17th century). As to Menteith, the name Loch of Menteith is found on maps into the nineteenth century.

On the Blaeu Atlas of Scotland, 1654, the Lake of Menteith is named Loch Inche mahumo (meaning 'Inchmahome Lake').