Comrie is an affluent village in Perthshire, towards the western end of Strathearn, seven miles west of Crieff. There is another Comrie in Perthshire, found in a detached part of the county, adjacent to Oakley in Fife. The Strathearn Comrie is a historic conservation village, recognised for its outstanding beauty and history. The village is within in a National Scenic Area.

To the north of the village, Ben Chonzie and the Grampian Mountains rise majestically, while to the south of the village wide and open moorland is joined by lesser hills and glens which provide a fine range of terrain.

Today Comrie is an attractive retirement village, recording the largest proportion of over-65s in Scotland in the 1991 census. The village's economy is supplemented by adventure and wildlife tourism.

Standing on the Highland Boundary Fault, the village experiences more earth tremors than anywhere else in Britain.[1] Comrie became the site of one of the world's first seismometers in 1840, and a functional replica is still housed in the 'Earthquake House' in The Ros in Comrie.[2]

Comrie has an old nickname of the 'Shaky Toun'. 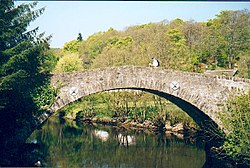 Bridge over the Earn at Comrie

The name Comrie is derived from the original Gaelic name Con-ruith or Comh-ruith, translated literally as 'running together', or 'the place where rivers meet'. In modern Gaelic the name is more often transcribed as Comraidh, Cuimridh or Cuimrigh. The name refers to the meeting of three rivers: the River Ruchill and the River Lednock running into the River Earn.

The village of today

Comrie has a number of local amenities which include a primary school, a post office, two hotels ('The Comrie Hotel' and 'The Royal Hotel', both of which contain their own restaurant and bar), five churches of various denominations, two small cafés (one of which is also the local fish and chip shop), a restaurant ('The Deil's Cauldron'), and an independent petrol station.

The White Church, the former parish kirk, is Comrie's most striking building, with its prominent tower and spire situated on the roadside of the ancient churchyard at the heart of the village. This is an early Christian site, dedicated to the obscure early saint Kessog (or Mokessog), who may have flourished in the 8th century.

Today's Comrie Parish Church is of a grand Gothic style, disproportionate to anything else in the village dominates the distant skyline. It was designed and built in 1881 by George T Ewing.

There is significant evidence of prehistoric habitation: standing stones remains from the Stone Age to the Iron Age.

A Roman fort is found on the outskirts of the town, possibly a marching camp built for Agricola's northern campaign of AD 79, or later expeditions. The area has strategic position on the southern fringe of the Highlands and this is one of the line of "glen blocking" forts which runs from Drumquhassle to Stracathro. The camp was some 22 acres.

In the modern period, Comrie's early prosperity derived from weaving, as a cottage industry. Comrie was also important as a droving town – it stood by a river crossing used by the drovers bringing their Highland cattle southwards.

Much of the land around Comrie was owned by the Drummond family, Earls of Perth, latterly Earls of Ancaster, whose main seat was Drummond Castle, south of Crieff. Another branch of the Drummonds owned Drummondernoch to the west of the town. Aberuchill Castle, however, just outside Comrie was originally a Campbell seat.

Over the years the village has grown to incorporate many of its smaller satellite settlements, including The Ross, a hamlet to the west of the village contained within a river peninsula (An Ros means a peninsula) which became more accessible when the Ross Bridge was built in 1792. Until the bridge, the Ross was only accessible over a river ford. Other isolated villages and hamlets now brought within the embrace of Comrie include Invergeldie in Glen Lednock and Dalchruin in Glen Artney. Small isolated settlements preceded them, as for instance Glen Lednock contained 21 different settlements of 350 individual structures and 25 corn-drying kilns, until the Highland Clearances during the 18th and 19th centuries.

Comrie underwent a renaissance in the early 19th century and Victorian periods as an attractive location for wealthy residents and visitors, an image which has been maintained to the present day. A result of this popularity was the coming of the railway in 1893, when the Caledonian Railway completed a branch line from Crieff. This line was later extended to meet the Callander and Oban Railway at Lochearnhead. The line from Comrie to Lochearnhead was closed in 1951 and the Comrie to Crieff line closed in 1964.

Comrie's mountainous location with an abundance of streams and lochs meant that the early 20th Century saw the development of a number of hydro-electric power schemes in the area. A dam was built in Glen Lednock and water was piped from Loch Earn in the west to another power station.

Sights around the village 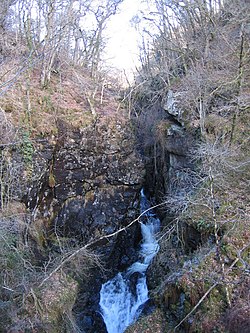 Some of the buildings and homes in the village date back hundreds of years with many traditional highland cottages built in dry-stone and/or clay which all would have originally been endowed with thatched roofs. In the higher mountain glens surrounding the village traditional highland blackhouses, most now in ruins, are also to be found. There are also a number of grand estate homes and historic castles in the local area. For the most part however, in the main quadrants of the village are to be found Victorian and Edwardian buildings, including many large detached villas and small terraces. In the newer parts of the village more modern properties from the 1950s onwards dominate, including extremely modern properties of varying character.

Comrie has a little-known Charles Rennie Mackintosh building, a shop in the main street with a first floor corner turret built in a version of the Scottish vernacular style.

A granite obelisk atop Dun Mor to the north commemorates Henry Dundas, 1st Viscount Melville. The monument is reached by a woodland trail through wooded Glen Lednock.

The De'ils Caldron (also known as the Falls of Lednock) is found in Glen Lednock. Here the river has cut a high, cascading waterfall in the surrounding rock, with pools below resembling a boiling cauldron. It is said that a water-elf, Uris-chidh resides here and attempts to lure victims into the tracherous waters. Following the path down a lesser companion to the great falls, The Wee Cauldron, which offers a calmer view of the river. Following the path through the forest eventually returns the walker to the village.

To the south of the village is a military camp at Cultybraggan. During Second World War this was POW Camp 21[3] and housed Italian and later German prisoners of war. This was a 'black' camp, for prisoners who were ardent Nazis – it became infamous after one prisoner, Wolfgang Rosterg, who opposed the Nazis, was lynched there by fellow inmates (who were hanged after the war for the act). Rudolf Hess was imprisoned at Cultybraggan overnight.

Over 50 local voluntary groups operated in and around Comrie, covering many interests.

The Flambeaux Parade and Hogmanay Celebrations

Comrie has a unique and somewhat curious Hogmanay ritual. Each New Year, on the stroke of midnight, a torchlight procession marches through the village. Traditionally the procession involves the twelve strongest men of the village carrying long, thick birch poles, to which burning tarred rags are attached, to each of the four corners of the village. The procession is usually accompanied by the village pipe band and villagers with floats and dressed in costume. After the procession the torches are thrown from the Dalginross Bridge into the River Earn. The precise origins of the ceremony are unclear.

The spectacle attracts thousands of visitors from all around the world to the small highland village each Hogmanay. A countdown to midnight is usually held at Melville Square and after the processions people gather here again for traditional music and dancing. Drinking alcohol in the street is commonplace and tolerated. Parties in village homes are common and other Hogmanay traditions like first footing are also observed.

An annual two-week festival, called the Comrie Fortnight, is held in the village during July and August. The Comrie Fortnight started in the late 1960s and has evolved over the years, now consisting of a wide range of activities including competitions, outings, dances and a float parade. Profits from the Comrie Fortnight are used to support events and groups in the local community.

Historically, Comrie and the surrounding area has been Gaelic-speaking. A statistical account of the Comrie Parish from 1799 recites that "The common language of the people is Gaelic and all the natives understand it; but many, especially the old, do not understand English". Gaelic appears to have remained the primary language during the early part of the Nineteenth Century, as the following passage written in 1828 from Mr.Mushet, local minister at the time, describing the annual celebration of the sacrament of the lord's supper testifies "The Lord favoured us (blessed be His name) with fair and seasonable weather. We had near eleven tables in Irish (Gaelic). Each table contained forty-eight persons or thereabout, and we had only two tables and some few persons at the third in English".

Today the village is English-speaking. Gaelic struggles to retain its place and Comrie retains a larger than average number of speakers.

Comrie Golf Club was founded in 1891 and is situated on the outskirts of the village of Comrie.[4]