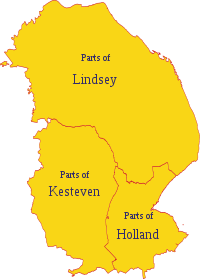 The Parts of Lincolnshire

The County of Lincoln is a shire on the east coast of England. It is a low-lying county with much drained fenland, particularly in the south-east.

The county is divided into three parts:

Lincolnshire is one of Britain's biggest counties, the fifth largest; but despite having a population of over a million, it has few sizeable towns and remains predominantly agricultural. Its county town is the city of Lincoln in the heart of the shire.

Lincolnshire has borders with seven counties, but its longest border is with the sea. The East and West Ridings of Yorkshire stand on Lincolnshire's northern border, Nottinghamshire and Leicestershire to the west and Rutland to the south-west. Northamptonshire and Cambridgeshire are to the south and Norfolk to the south-east.

The broad extent of the county consists of a number of different areas, including the Lincolnshire Fens in the south, the Carrs (similar flat land in the north of the county), the Lincolnshire Wolds, and the industrial towns along the south bank of the Humber and the North Sea coast around Grimsby and Scunthorpe.

Lincolnshire is a rural area where the pace of life is generally much slower than in much of Britain. Sunday is still largely a day of rest, with only shops in Lincoln, larger market towns, and resorts and industrial towns of the North Sea coast generally remaining open. Some towns and villages in the county still observe half-day closing on Thursdays. Due to the large distances between the towns, many villages have remained very self-contained: most still have shops, pubs, local halls and local chapels and churches, offering a variety of social activities for residents. Fishing (in the extensive river and drainage system in the fens) and shooting are popular activities.

The Lincolnshire Fens are a part of the Great Fen which spreads over the lands around the Wash in Lincolnshire and Norfolk and deep inland in Cambridgeshire, Huntingdonshire and the Soke of Peterborough. Much of the land here is at or below sea level and was once a vast fen of wetland, lakes and channels, now drained the produce fertile farmland.

Inland the fen ends only at the Lincoln Edge, a long, straight running along Lincolnshire a thin, straight line to Lincoln and on to the Humber. 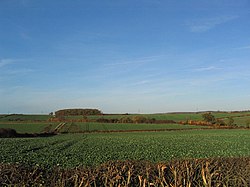 Lincolnshire is an agricultural area, growing large amounts of wheat, barley, sugar beet, and oilseed rape. In South Lincolnshire, where the soil is particularly rich in nutrients, some of the most common crops include cabbages, cauliflowers, and onions.

Mechanisation around the turn of the 20th century greatly diminished the number of workers required to operate the county's relatively large farms, and the proportion of workers in the agricultural sector dropped substantially during this period. Several major engineering companies developed in Lincoln, Gainsborough and Grantham to support those changes, perhaps most famously Fosters of Lincoln, who built the first tank, and Richard Hornsby & Sons of Grantham. Most such companies are long gone, and Lincolnshire is no longer an engineering centre.

Today, immigrant workers from Central and Eastern Europe supply a very large component of the seasonal agricultural workforce, particularly in the south of the county where more labour-intensive crops such as small vegetables and cut flowers are typically grown. This seasonal influx of migrant labour occasionally causes tension between the migrant workforce and local people, in a county which is still relatively unaccustomed to the large scale immigration experienced by other parts of the United Kingdom.

However, as a result of the current economic climate some food production facilities have closed down, this has caused some reduction in the levels of migrant workers. The large number of Portuguese is still very obvious in the town of Boston, and in Grantham, Poles are found in large numbers.[2][3] 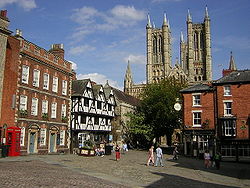 The centre of Lincoln

The name of Lincoln is ancient. The city was known to the Romans as Lindum Colonia - Lindum colony - and from this comes "Lincoln", the name by which the city has been known since Anglo-Saxon times. A major Roman road was driven through Lincolnshire, Ermine Street, running to Lindum. Northern Lincolnshire became in the early Saxon period the Kingdom of Lindsey, which passed between Mercian and Northumbrian control over the unsettled period before Mercian supremacy was established. The name of Lindsey remains.

The Danes broke upon the land in the ninth century, armies followed by settlers, and many of the Lincolnshire place-names reflect their Scandinavian heritage; towns and villages with names ending -by and -thorpe are particularly concentrated in this county. The Danes established a fortified presence with armies based at Lincoln and at Stamford. It is assumed that Lincolnshire as a shire was created at the reconquest in the ninth century from the joining of these two Danish army-lands.

The Normans moved the seat of the Midlands bishopric from Dorchester on Thames to Lincoln, and built the vast Lincoln Cathedral. They also built Lincoln Castle which still stands proud over the city. The Middle Ages were a time in which Lincoln became one of the most important cities of the kingdom. Boston in Holland throve as a port, and indeed it was the major port for the Baltic Trade into the nineteenth century when its port began to prove ill-suited to the great ships of the age.

The industrial revolution had its main impact on the Humber, which great ships could enter. 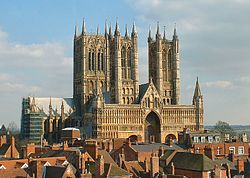 The main towns of Lincolnshire are the City of Lincoln, Scunthorpe, Great Grimsby and Boston.

Many of the towns in the county continue to hold a weekly market, a centuries-old tradition reinvigorated recently by the growth of farmers' markets. 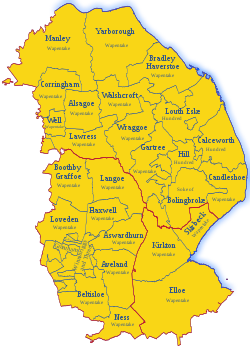 The county is divided into 30 wapentakes:

Lincolnshire is relatively unusual in the composition of its population, being one of the least ethnically diverse counties of the United Kingdom (98.5% of the population describe themselves as "white"). Over recent years inward migration by people from ethnic minority communities has increased (particularly to population centres such as Lincoln and Boston) but the absolute number of non-white Lincolnshire residents remains very low.

Recently, the county has also witnessed a growing trend towards immigration of retired people from other parts of the United Kingdom, particularly those from the southern counties attracted by the generally lower property prices and the slower and more relaxed pace of life. The relatively high proportion of elderly and retired people is reflected in many of the services, activities and events. Sleaford is considered one of the fastest growing towns in the eastern Midlands, with many professional people moving there to benefit from (relatively) low house prices, average crime rate and the selective education offered.

Those born in Lincolnshire are sometimes given the nickname of Yellowbellies. The origin of this term is debated, but is most commonly believed to derive from the uniforms of the 10th Regiment of Foot (later the Lincolnshire Regiment) who wore a very bright yellow waistcoat for identification on the battlefield.

Lincolnshire has its own distinctive accents, little known outside the shire, though inevitably being lost from the towns though the rubbings of modernity.

Lincolnshire was historically associated with the Lincolnshire bagpipe, an instrument derided as a coarse and unpleasant instrument in contemporary literature, but noted as very popular in the county. The last player, John Hunsley of South Somercotes, died around 1850, and since then the instrument has been extinct.

In 1967, Percy Grainger wrote his Lincolnshire Posy for wind band. The piece is a compilation of folksongs "musical wildflowers" collected by the composer in and around the county of Lincoln.

Lincolnshire has a number of local dishes:

Every year the Lincolnshire Agricultural Society, founded in 1869, stages the Lincolnshire Agricultural Show.[5] It is held on the Wednesday and Thursday of the last whole week of June at its Showground at Grange de Lings, a few miles north of Lincoln on the A15. The show was first held here in 1958. First held around the year 1884, it is one of the largest agricultural shows in the country, and is attended by around 100,000 people over its two days. The Showground is in regular use throughout the year for a wide range of other events and functions.

Smaller local agricultural shows, such as the Deeping Show or the Heckington Show[6] can still be found. Corby Glen sheep fair[7] has been held every year since 1238.

Each year RAF Waddington is the home to the RAF Waddington Air Show. The two day event attracts around 40,000 people and usually takes place during the last weekend of June.

On the Monday before Easter, an unusual auction takes place in Bourne to let the grazing rights of the Whitebread Meadow.[8] Bidding takes place while two boys race toward the Queen's Bridge in Eastgate, the end of which dash is equivalent to the falling of the gavel. The whole affair dates back to the 1742 will of William Clay.

The Haxey Hood village competition takes place every January, as it has for over 700 years.

Stamford Mid-Lent fair sees showmen converge on the town the week after Mothering Sunday, with rides and sideshows filling Broad Street, the Sheepmarket and the Meadows for a week. Stalls selling Grantham gingerbread and nougat are a traditional feature. The following week sees them in Grantham, on the way North for the Summer. Roger Tuby brings a small funfair to Bourne and then to Spalding in Spring and returns in Autumn at the end of the season.

The villages of Tetford and Salmonby hold an annual Scarecrow Festival in May every year.

The Belchford Downhill Challenge which is held every two years: soapbox racers race down the hill at up to 20 mph. The turnout has been up to 1,000.

In recent years Lincoln Christmas Market, a street market throughout historic area of the city, has been held at the start of December. Around the same time Christmas lights are turned on in Bourne, Sleaford, Skegness, and other towns.

Throughout the summer the Stamford Shakespeare Company[9] presents the Bard's plays in the open air theatre at Tolethorpe Hall, which is actually just across the border in Rutland.

The Spalding Flower Parade is held in late spring every year. Colourful floats decorated with tulip heads compete for a cup. The tradition was started in 1959, and draws coach tours from across Britain. There was talk of 2008 being the last parade, but a smaller event planned for 2009[10] may set the pattern for future years. 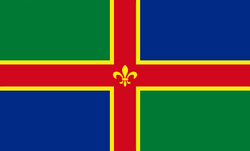 The unofficial anthem of the county is the traditional folk song, "The Lincolnshire Poacher", which dates from around 1776. A version of the song was the theme to BBC Radio Lincolnshire for many years.

Plantlife named as the county flower of Lincolnshire the Common Dog-violet.

The Lincolnshire flag originated in a competition launches In August 2005, BBC Radio Lincolnshire and Lincolnshire Life magazine launched a vote for a flag to represent the county. Six competing designs were voted upon by locals. The winning submission was unveiled in October 2005,[11][12] which combines the arms of Lincoln (a red cross bearing a fleur-de-lys) with a yellow border for the "Lincolnshire Yellowbellies" and green and blue for the fields and floods of the county.

The Lincoln Imp has symbolised Cathedral, City, and county for many years.

Things to see in Lincolnshire 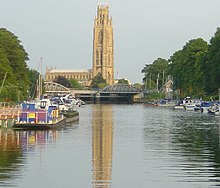 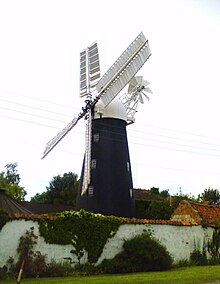