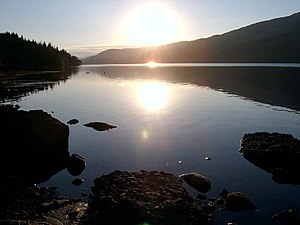 Loch Venachar is a freshwater loch in Perthshire, lying between Callander and Brig o' Turk. Its name is Gaelic, in which language it is called Loch Bheannchair.

The Black Water discharges from Loch Achray into the western end of Loch Venachar, and at the eastern end emerges Eas Gobhain which joins with the River Leny at Callander to form the River Teith.

The south shore of the loch is covered by woodland containing numerous forest tracks, some leading over the hills to the Lake of Menteith and some leading westward along the loch to Loch Achray and the Trossachs.

Invertrossachs House, which was visited by Queen Victoria in 1869, also stands on the south shore.

Venachar sailing club is accessible from the Invertrossachs private road. This sailing club uses the loch for regular racing events between March and October.[1]

The loch is well stocked with trout and pike, and fishing is available, by permit, from the shore and by boat.