The County of Flint is a maritime shire of which the greater part lies along the estuary of the River Dee and on the coast of the Irish Sea, in the very north-eastern part of Wales.

Flintshire is broken into detached parts. The main body of the shire lies between the River Dee and the River Clwyd, reaching in from the coast up into the hills, but it also has an area detached from the main body known as Maelor Saesneg or English Maelor, which lies to the south-east as a wedge driven between Shropshire and Cheshire, separated from the main body of its county by a tract of Denbighshire. Between these two lies a small portion wholly surrounded by Denbighshire. Thus Flintshire has boundaries with Denbighshire in the west and south, Cheshire in the east and south-east and Shropshire in the south-east.

Notwithstanding the county's small size, it contains an ancient cathedral, at St Asaph, the seat of a diocese founded in the sixth century.

Flintshire lies next to Cheshire and has been an Anglicised area since before the Norman conquest, with more place-names and families of English origin than elsewhere in Wales. Many of the villages of Flintshire are listed in the Domesday Book of 1086 under the heading of Cheshire. 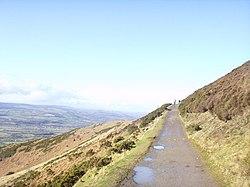 The Clwydian Mountains occupy much of the west of the county. The highest point is Moel Famau (1,820 feet). The main rivers are the Dee (the estuary of which forms much of the coast) and the Clwyd.

The main detached part of Flintshire is Maelor Saesneg in the south-east, between Denbighshire, Cheshire and Shropshire. Other detached parts are entirely surrounded by Denbighshire, namely the manors of Marford and Hoseley, Abenbury Fechan and Bryn Estyn, all on the outskirts of Wrexham, and also a small part of the parish of Erbistock around the Boat Inn. Also, a small part of Flintshire is physically if not technically detached, namely the small acres, including the village of Sealand, isolated across the River Dee when its course was changed to improve navigation.

Parts of Flintshire have major manufacturing industries. Amongst these are a Toyota plant that manufactures engines, a Corus Group steelworks and Shotton Paper, but most importantly Airbus, making the wings for the Airbus A330 and A380 at Broughton.

There are daily flights of the Airbus Beluga transport aircraft of Airbus wings from Broughton for the smaller aircraft. The wings for the A380, which are too large to be transported by air use a multi-modal transport using Flintshire's roads, the River Dee and the port of Mostyn, also in Flintshire. The motto of Airbus in Flintshire is: "Without us, it's just a bus"; meaning that the parts that make Airbus aircraft fly, rather than just run along the ground, are made in Flintshire.

Flintshire is also known for its internet companies, some of which started here in the industrial lands and continue to support employment. 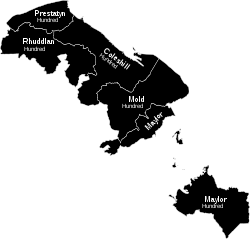 The hundreds of Flintshire

Flintshire was first formed in 1284 under the terms of the Statute of Rhuddlan to include cantrefs formerly parts of Gwynedd Is Conwy and Powys Fadog:

Also included were the Lordships of Mold, Hawarden, Mostyn and Hope.

At the Laws in Wales Act, further provision was made. In 1535 Flintshire was not changed, as an existing shire. St Asaph ("Saint Tafse") was originally included amongst the "Lordships, Townships, Parishes, Commotes and Cantrefs of Denbighland" within Denbighshire[1] but adjustments were made later and it was confirmed to Flintshire in 1542.[2]

The Act also organised the county into five hundreds: 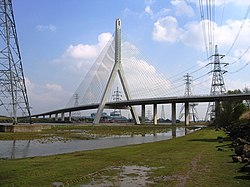 The chief towns of the county are on or by the Dee and the coast. The biggest, Buckley, Connah's Quay and Flint are industrial towns, though Flint has origins in the Middle Ages.

Things to see in Flintshire 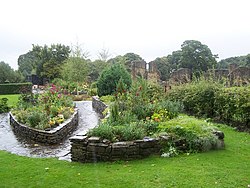