Crianlarich is a village in the highlands of western Perthshire. It is about six miles north-east of the head of Loch Lomond. The village's name derives from the Gaelic for "low pass".

The village is a transport junction for road and rail. Crianlarich has been a major crossroads for northbound and westbound journeys in Scotland since the Middle Ages. In the 1750s, two military roads met in the village. In the 19th century, it became a railway junction on what is now the West Highland Line. In the 20th century it became the meeting point of the major A82 and A85 roads. As such, it is designated a primary destination, signposted from as far as Glasgow in the south, Perth in the east, Oban in the west and Fort William in the north, notwithstanding its small population of population, of 185 in 2001.

The village is served by Crianlarich railway station.

Crianlarich bills itself "the Gateway to the Highlands" (as indeed do Pitlochry, Dunoon and others).

The village lies in the glen of Strath Fillan at the north-western extent of the Trossachs, lying in the shadow of several Munro peaks, notably Ben More, Stob Binnein and Cruach Ardrain. Thus Crianlarich is very popular with hillwalkers. Also the village lies halfway along the long distance footpath, the West Highland Way.

Its location makes Crianlarich a popular stop for tourists and there are a variety of types of overnight accommodation including guesthouses, B&Bs a SYHA Youth Hostel and an hotel. 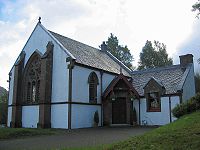 The parish is known as Strathfilian. The church is a charming kirk in a prominent position in the village as befits its role in the community. It was dsigned by Thomas Ross and built in 1901.

The interior is largely unaltered from when the church was built; whitewashed walls rise above a timber dado and an open timber roof. Oak supplies too the font and communion table.