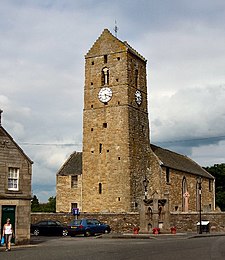 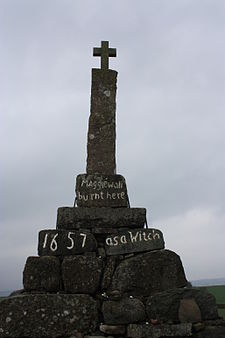 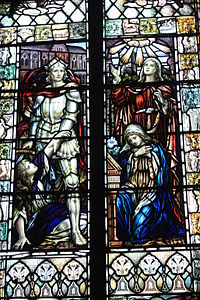 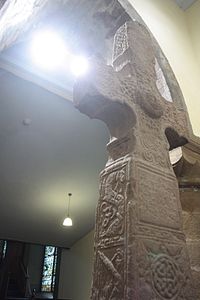 Dunning is a small village and parish in Perthshire with a population of about 1,000. The village is built around the 12th-13th century former parish church of St Serf, where the Dupplin Cross is displayed (Historic Scotland; open in summer without entrance charge). It is in Strathearn, the valley of the River Earn, north of the Ochil Hills. It is just south of the A9 road, between Auchterarder and the county town, Perth. The village includes a recreation area which embraces a nine-hole golf course, a football pitch and tennis court.

Dunning is steeped in history from the earliest days.[1] There was an Iron Age fort on Dun Knock (no visible remains) and a 1st-century Roman camp at Kincladie (part of the rampart and ditch survive in Kincladie Wood). The former is the probable origin of the name Dunning, ex Old Irish dúnán 'little fort'. Legend tells that Saint Serf (fl. 8th century?) killed a dragon here, and there is a thorn tree planted in Jacobite times.[2]

The Dunning Parish Historical Society web site (see below) includes St Serf's Church graveyard survey and Dunning parish census records, both useful for genealogy research. The village (except the church) was burned during the 1715 Jacobite Rebellion. The oldest surviving house (recently restored) dates from the 1730s.

The fountain at the centre of the village dates from 1874 and was gifted by Alexander Martin, a former Dunning resident, who made his fortune in New Brunswick as a confectioner. It includes interesting stone carvings in a mediæval style, including an otter eating a trout.

A plaque on the outer kirkyard wall commemorates the evacuated children (mainly from Glasgow who stayed here during the Second World War.

The church has a distinctive and largely intact tower dating from around 1200. The interior was remodelled in the early 19th century to place the pulpit centrally after adding a north wing and internal galleries. Stained glass is of an excellent standard, especially for a rural church and is by Ballantyne & Son. The church was in use until 1972 but is now in the care of Historic Scotland. It is visible to the public at no church but under supervision.[3]

The building was used in the filming of Complicity.

The cross was placed in the church after a protest to Historic Scotland at its removal from its home in Dunning.

In a field north-west of the village stands a sombre 18th century monument bearing the inscription "Maggie Wall was burnt here 1657 as a Witch".