The County of Cardigan is a costal shire on the west coast of Wales, bounded on the west by Cardigan Bay, part of the Irish Sea, but away from the county's narrow coastal plain Cardiganshire rises up into mountains.

Cardiganshire curves along the coast of Cardigan Bay, part of the Irish Sea, a coast marked by fine, sandy beaches and rugged cliffs. Inland it rises into gentle farming country and river valleys, rising up to the dramatic west slopes of the Cambrian Mountains.

The Cambrian Mountains cover much of the east of the county; this large area forms part of the desert of Wales. In the south and west, the surface is less elevated. The highest point is Plynlimon at 2,467 feet, where five rivers have their source: the Severn, the Wye, the Dulas, the Llyfnant and the Rheidol, the last of which meets the River Mynach in a 300-foot plunge at the Devil's Bridge chasm.

The 50 miles of coastline have many sandy beaches with clear sea water of high quality. Along with Pembrokeshire and Cornwall, Cardiganshire's coast boasts some of the whitest sand beaches and cleanest, clearest, turquoise seas in the United Kingdom, particularly the coast from New Quay to Aberporth, mainly due to the fact that the Cardigan Bay coast has virtually no industrial discharge. As a result, off Cardiganshire is the only permanent summer residence of bottle-nosed dolphins in the United Kingdom.

Coursing towards this coast are several rivers and brooks. The largest river is the River Teifi which forms the border with Carmarthenshire and Pembrokeshire for much of its length. Other significant rivers include the River Aeron which has its estuary at Aberaeron, the River Ystwyth and the River Rheidol both of which reach the sea in Aberystwyth harbour.

Tourism and agriculture, chiefly hill farming, are the most important industries. In addition, two universities are within the county boundaries: Aberystwyth University and the Lampeter campus of the University of Wales, Trinity Saint David. The National Library of Wales, which was founded in 1907, is located in Aberystwyth.

The county lacks any large commercial areas. The nearest substantial settlements are located at least 1 hour 45 minutes drive away. From Cardiganshire's largest town, Aberystwyth, the nearest sizeable commercial towns are Swansea in Glamorgan, 75 miles to the south, Shrewsbury in Shropshire 76 miles to the east and Wrexham in Denbighshire 82 miles to the northeast.

Dylan Thomas lived for a time in New Quay and in Talsarn and he frequented Aberaeron and Lampeter. The Dylan Thomas Trail runs through part of Cardiganshire, linking the places associated with the poet.[1] 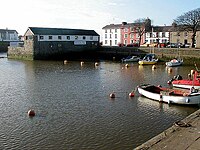 Cardiganshire is a county of small villages. The towns are modest; Aberytwyth stands out as a confident town and Cardigan though not large has the bustle of a small, satisfied market town. The main towns in the county are:

The name of the county comes from the ancient Kingdom of Ceredigion, which means Land of Ceredig, who was a son of Cunedda, a chieftain who re-conquered much of western Britain from the Irish in the 5th century. It remained a kingdom ruled by Ceredig's descendants until it expanded and changed its name, first to Seisyllwg in the late 7th century and, after the union of Seisyllwg with Dyfed, it was incorporated into Deheubarth in the mid 10th century.

In 1282, Edward I of England conquered the principality of Wales and divided the area into counties. The name Cardigan was an Anglicisation of the name for the historic kingdom of Ceredigion.

Non-Welsh speakers tend to be more concentrated in and around the two university towns and along the coast, for example in Borth only 40% of the population was born in Wales and 36% of residents are Welsh-speaking.

Things to see in Cardiganshire 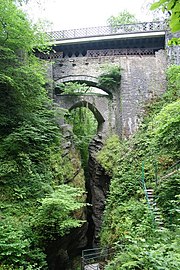