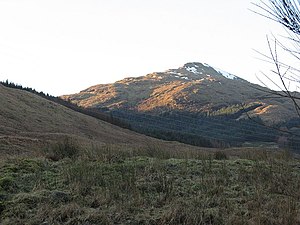 Glen Dochart in Perthshire is a glen which runs from Crianlarich eastwards to Killin, in the west of the county and deep within the Highlands.

Through the glen runs the River Dochart. Following it, the A89 road has been built through the glen as far as Glen Ogle, where it turns and runs up that glen.

The head of the glen is at Loch Dochart, just outside Crianlarich. Around the corner, stretching south to Crianlarich, is Strath Fillan: the River Fillan which flows down this glen is merely the upper reaches of the Docart and the two glens, Strath Fillan and Glen Dochart, are likewise one system.

The glen extends from Loch Dochart along the course of the river, opening into Loch Iubhair and eastwards and latterly north-eastwards.

The bottom of the glen is where the Dochart discharged into Loch Tay at Killin.