The County of Monmouth is a shire in the south-west of Great Britain. The eastern part of the county is mainly agricultural, while rich mineral resources were discovered in the western valleys in the 18th century. This led to the western part of the county becoming highly industrialised with coal mining and iron working becoming major employers between the 18th and late 20th centuries.[1]

Monmouth, the county town, stands at the extreme north-east of the county, on the border with Herefordshire, while the largest settlement, the city of Newport lies in the southern coastal belt. The highest point is Chwarel y Fan at 2,228 feet.

The island of Denny in the Bristol Channel also belongs to Monmouthshire and hundred of Caldicot. 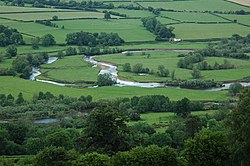 The Usk meandering near Scethrog

Monmouthshire is watered by four main rivers, fed from the county's verdant valleys, of which three are border rivers and the fourth runs through the green heart of the shire.

The River Monnow marks the border with Gloucestershire, flowing out of the Black Mountains, it runs 26 miles down to Monmouth, which town takes its name from the river and thus so does the county of Monmouth itself.

The Wye is one of the great rivers of the kingdom; indeed only four rivers of Britain are longer. It is not specifically a Monmouthshire river, rising in the mountains between Brecknockshire and Radnorshire and swelling in the womb of Herefordshire, but its broad lower reach is Monmouthshire's eastern border, with Gloucestershire, and on this river stand the fine Monmouthshire towns of Monmouth and Chepstow and the picturesque valley side at Tintern.

The River Rhymney flows off the Brecon Beacons, down the Rhymney Valley amongst the mining villages which once turned is waters black. Its highest village is Rhymney and its lowest Rumney, and between these two namesakes and down to the Severn estuary its whole course marks the border between Monmouthshire and Glamorgan.

The River Usk is the river which waters Monmouthshire's heartland. It sees all the contrasting aspects of the county in its course. It enters the shire as a young river in the mountains in the northernmost parts, above Abergavenny, and meanders gently through the rolling farmland in middle of the shire, eventually coming to Caerleon of the county's historic heritage, and then on to the county's urban aspect, in the ancient and modern of Newport, disgorging its waters into the Severn Estuary at Uskmouth. 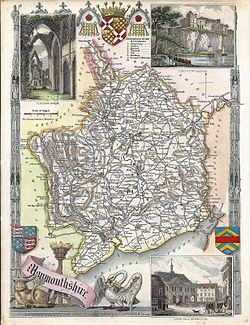 Map of the hundreds of Monmouthshire by Thomas Moule, c. 1831

The county was divided into six Hundreds in 1542: 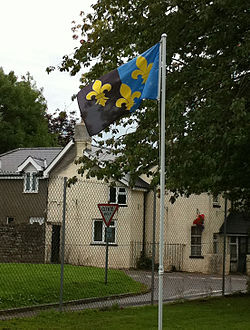 the Flag of Monmouthshire flying at the Hood Memorial Hall, Devauden

The valley of the Rhymney River is extensively urbanised, such that many towns and other settlements straddle the border between Monmouthshire and Glamorgan:

Several settlements also straddle the river Wye, which forms the border between Monmouthshire and Gloucestershire:

Along the urbanised northern border with Brecknockshire is a further example of a cross-border conurbation:

See Category:Towns and villages in Monmouthshire

Monmouthshire lies at the junction of major routes from South Wales to London and the Midlands. Major roads include the M4 motorway from London to Carmarthenshire, the parallel A40 and A48 routes and the A465 and A449 routes to the Midlands.

The Monmouthshire canal and the Brecknockshire and Abergavenny canal converge at Pontymoile near Pontypool.

Things to see in Monmouthshire 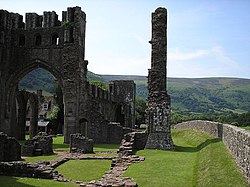 Other fine buildings and ruins