Scone Palace, once a seat of kings, is a Category A listed historic house near the village of Scone and the city of Perth, in Perthshire. Built of red sandstone with a castellated roof, it is one of the finest examples of late Georgian Gothic style in the United Kingdom.

A place steeped in history, Scone was originally the site of an early Christian church, and later an Augustinian priory. In the 12th century, Scone Priory was granted abbey status and as a result an Abbot's residence - an Abbot's Palace - was constructed. It is for this reason (Scone's status as an abbey) that the current structure retains the name "Palace". Scone Abbey was severely damaged in 1559 during the Reformation after a mob whipped up by the famous reformer, John Knox, came to Scone from Dundee.

Having survived the Reformation, the Abbey in 1600 became a secular Lordship (and home) within the parish of Scone. In this guise the Palace has thus been home to the Earls of Mansfield for over 400 years. During the early 19th century the Palace was enlarged by the architect William Atkinson. In 1802, David William Murray, 3rd Earl of Mansfield, commissioned Atkinson to extend the Palace, recasting the late 16th-century Palace of Scone. The 3rd Earl tasked Atkinson with updating the old Palace whilst maintaining characteristics of the mediæval Gothic abbey buildings it was built upon, with the majority of work finished by 1808.

Landscaping work around the Palace was undertaken by John Claudius Loudon. Loudon was, similarly to Atkinson, tasked with designing a landscape to remain in keeping with, as well as highlighting, the historic significance of Scone. Scone was for nearly 1000 years the crowning-place of Scottish kings and the home of the Stone of Scone. It is a site of immense historic significance.

Further work was undertaken in 1842 to make Scone Palace ready for the visit of Queen Victoria and Prince Albert.[1] The vast majority of this work was to the interior decor although did include the provision of running water a huge cost to the Earl. Many of the original early 19th century interior designs survive, including several ornately carved and vaulted ceilings.

Scone Palace is a 5 star tourism attraction. The State Rooms are open each year from April till the end of September. It is possible for groups to organize visits during the winter months. The Palace grounds are also open to the public. The gardens include the famous David Douglas Pinetum plus a star-shaped maze. The Palace also hosts multiple outdoor events including the Game & Wildlife Conservation Trust's Scottish Game Fair, Rewind Festival, and the Farming of Yesteryear among many others.

The history of Scone is shrouded in myth and legend. The earliest surviving written record of Scone is a charter of 906, though how long it had then been established and with what role is unknown.

In the Middle Ages, the land was the site of a major Augustinian abbey, Scone Abbey, nothing of which now remains above ground level except detached architectural fragments. King Constantine II in 906 called for an assembly to meet at Scone. The assembly was recorded in the Chronicle of the Kings of Alba; Alba being the early name for the early mediæval Kingdom of Scotland. The Chronicle records that:

In the Middle Ages Scone was as a royal residence and hunting ground. Robert II spent much of his life calling Scone home, and he was eventually laid to rest in the Abbey itself, although his grave has never been located.

In Gaelic poetry Scone's association more specifically with kings and king-making gave it various poetic epithets, for instance, Scoine sciath-airde, meaning "Scone of the High Shields", and Scoine sciath-bhinne, meaning "Scone of the Noisy Shields".[3] The "Noisy Shields" here refer to a folkloric ceremony in which magnates would gather at Scone for a Council. As they entered the Great Hall each magnate in turn would hang their shield displaying their Coats of Arms on the walls before beating their weapons against them.

From 1114 to 1559, Scone was one of Scotland's major monasteries and later abbeys. It is often said to have been founded by King Alexander I. It is more likely the case that the monastery's status was 'formalised' as a result of King Alexander I's charter. A representation of the church on the Abbey's seal, and some surviving architectural fragments, show that it was built in the Romanesque style, with a central tower crowned with a spire. Between 1284 and 1402 Scone Abbey (sometimes referred to as the Palace of the Abbots) often served to house the Parliament of Scotland.

Alexander II and Alexander III, both crowned at Scone, ruled from 1214 to 1286. The belief was that a King of Scots had to be crowned upon the Stone of Scone, and so in 1296 King Edward I of England took the stone from the abbey and had it carried to Westminster Abbey. The Coronation Chair that still stands in the abbey was specially made to fit over it, so that all Kings of England would thenceforth be crowned on the stone. Robert the Bruce was crowned at Scone in 1306, though stoneless. The last coronation there was King Charles II in 1651, two years after his father had been beheaded in London. He was not to rule though until the Restoration in 1660.

Scone Abbey flourished for over four hundred years. In 1559, it fell victim to a mob from Dundee during the early days of the Reformation and was largely destroyed. In 1580 the abbey estates were granted to Lord Ruthven, later the Earl of Gowrie, who held estates around what is now called Huntingtower Castle. The Ruthvens rebuilt the Abbot's Palace of the old abbey as a grand residence. In 1600, James VI charged the family with treason and their estates at Scone were passed to Sir David Murray of Gospetrie, 1st Lord Scone, one of James' most loyal followers. 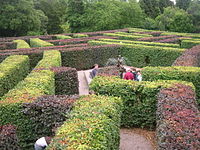 Neo-gothic in style, the Palace that can be visited today was finished in 1808.

The State Rooms of Scone Palace display fine collections of furniture, ceramics, ivories, and clocks. Some of the prized contents of Scone Palace are Rococo chairs by Pierre Bara, further items by Robert Adam and Chippendale, Dresden and Sèvres porcelains, as well as the truly unique collection of Vernee Martin vases and a Reisener writing desk given to David Murray, 2nd Earl of Mansfield by Marie-Antoinette. The collection at Scone Palace also includes a fantastic range of Scottish and British portraiture including works by Reynolds, Ramsay, and de Lazlo. There is also the famous piece of art by Sir David Wilkie called the Village Politicians which was commissioned and bought by David Murray, 3rd Earl of Mansfield. There are further pictures by David Teniers and the famous Zoffany depicting the mulatto Dido Elizabeth Belle and her cousin Lady Elizabeth Murray (both great nieces of William Murray, 1st Earl of Mansfield and Lord Chie Justice of England) wich picture inspired the 2013 film Belle. 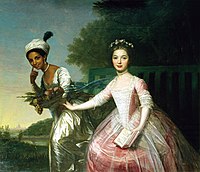 The Lennox Room, named after the Duke of Lennox, is rich in pieces with royal connections including the bed-hanging made by Mary Queen of Scots during her imprisonment in Loch Leven Castle, a gateleg oak table said to have belonged to King James VI, and an oak armchair used by Charles II for his coronation. Plus a portrait of the Rev. Andrew Murray, 1st Lord Balvaird.

The fabulous collection of large European ivories came from Bavaria, Italy and France. They were carved in the 17th, 18th and 19th centuries in elephant and walrus tusk, and collected mainly by William David Murray, 4th Earl of Mansfield. They are arranged around the Dining Room of the Palace.

The gardens and grounds are also open to the public. The grounds of Scone Palace feature the Moot Hill, the crowning place of the Kings of Scots. A replica of the Stone of Scone sits upon the Moot Hill in front of a 17th-century chapel containing a fine monument dedicated to David Murray of Gospertie, 1st Lord Scone by the Flemish sculpture Maximilian Colt. Another attraction in the grounds and gardens is the Murray Star shaped maze. The maze was inspired by the heraldic arms of the Murrays of Scone - an azure (blue) background with three stars argent (sliver).

There are fine woodlands in the grounds and policies of Scone Palace, some of the fir trees being at least 250 years old. The grounds of the Palace were the first place of introduction to Britain of the Douglas fir tree species,[4] after being introduced by David Douglas. Douglas was a son of Scone and worked as a gardener and forester for the Earl of Mansfield before embarking upon his botanical career. The first Douglas fir still stands in the grounds today.

Scone has a special relationship with trees due to the life of the famous botanist David Douglas. Douglas introduced the Douglas Fir to Europe and Scotland.

A number of peacocks roam the grounds, including several albino males.