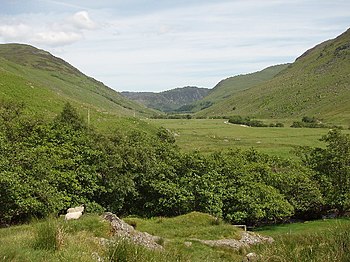 A view down Glen Almond 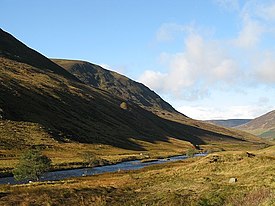 The river under Eagle Crag

Glen Almond or Glenalmond is a glen in Perthshire which stretches for several miles to the west of the city of Perth, being the glen of the River Almond. It is known in Gaelic as Gleann Amain.

The upper half of the glen runs through mountainous country and is virtually uninhabited whilst the lower, easterly section of the glen is more open. The change in character takes place as the river crosses the Highland Boundary Fault, leaving the Grampian Highlands for the Central Lowlands.

A short section of Glen Almond which has a more northwesterly-southeasterly alignment is a narrow part of the valley known as the Sma' Glen, which means 'narrow glen), known in Gaelic as Caol Ghleann Ghlinn Amain. The A822 road takes advantage of this deeply incised section of the glen to forge a route between Crieff and Strathbran, following the path taken by General Wade's Military Road, driven through the glen in the middle of the eighteenth century.[1]

William Wordsworth came here and made it the subject of a poem, Glen-Almain, the Narrow Glen:[2]

The inspiration for the work was in the confines of the Sma' Glen, a seemingly timeless place (apart from the road) with endless possibilities for romantic legend, and here is an ancient standing stone known today as 'Clach Ossian'.

Wordsworth's subject therefore was Ossian, the legendary poet of the Dark Ages, whose soaring verses, now accepted as having been written by James Macpherson in the 1760s, imbued the Romantic Movement into which Wordsworth threw himself: 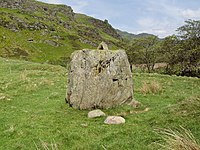 In this still place, remote from men,
Sleeps Ossian, in the Narrow Glen;
In this still place, where murmurs on
But one meek streamlet, only one:
He sang of battles, and the breath
Of stormy war, and violent death;
And should, methinks, when all was past,
Have rightfully be laid at last
Where rocks were rudely heap'd, and rent
As by a spirit turbulent;
Where sights were rough, and sounds were wild,
And everything unreconciled;
In some complaining dim retreat,
For fear and melancholy meet;
But this is calm; there cannot be
A more entire tranquility.

Does then the bard sleep here indeed?
Or is it but a groundless creed?
What matters it? - I blame them not
Whose fancy in this lonely spot
Was moved; and in such way express'd
Their notion of its perfect rest.
A convent, even a hermit's cell,
Would break the silence of this Dell:
It is not quiet, is not ease;
But something deeper far than these:
The separation that is here
Is of the grave; and of austere
Yet happy feelings of the dead:
And therefore, was it rightly said
That Ossian, last of all his race!
Lies buried in this lonely place.

By Newton Bridge in the Sma' Glen

Dallick House, a luxury self-catering house, is located within West Glenalmond Estate,[3] at the entrance to the Sma' Glen.