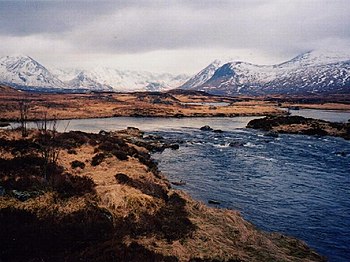 The Black Mount, seen over the wild landscape

Rannoch Moor is a large expanse of around 50 square miles of boggy, highland moorland spread across the meeting of Perthshire and Argyllshire to the west of Loch Rannoch, amongst the Highlands. The Moor is designated a 'Site of Special Scientific Interest' and a 'Special Area of Conservation'.[1]

Peat deposits pose major difficulties to builders of roads and railways. When the West Highland Line was built across Rannoch Moor, its builders had to float the tracks on a mattress of tree roots, brushwood and thousands of tons of earth and ashes.

The A82 road crosses through Rannoch Moor on its way to Glencoe and Fort William. Additionally, the West Highland Railway line crosses the moor. The railway rises to over 1,300 feet and travels over 23 miles of moorland.

The moor is notable for its wildlife, particularly famous for the sole British location for the Rannoch-rush, named after the moor. It was frequently visited by Horace Donisthorpe, who collected many unusual species of ants on the moor and surrounding hilly ground. Today it is still one of the few remaining habitats for Formica exsecta, the "narrow-headed ant", although recent surveys have failed to produce any sign of Formica pratensis, which Donisthorpe recorded in the area in the early part of the 20th century.

The hills provide fine sporting grounds: grouse moors are maintained, notably by the Rannoch Estate, which extends to the west of Loch Rannoch in Perthshire. Here too the moors provide deerstalking and fishing.

This expanse was at the heart of the last significant icefield in the British isles during the 'Loch Lomond Stadial' at the end of the last Ice Age. Once the great mass of ice had melted, the subsequent unburdening of the Earth's crust resulted in a continuing rise in the land which is estimated to be of the order of about one inch a year.

In culture and popular fiction

The moor haunts many a romantic imagination. It has appeared in:

The Her Royal Spyness series of novels by Rhys Bowen has the moor as the ancestral seat of Lady Georgina of Rannoch.