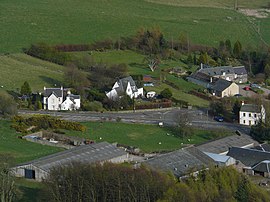 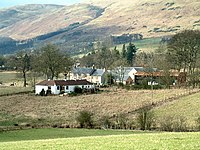 Muckhart is a parish in the south of Perthshire, adjacent to the borders with Clackmannanshire and Kinross-shire. It contains a village, Pool of Muckhart, and a series of hamlets close by, largest of which is Yetts of Muckhart. All lie at the foot of the great scarp of the Ochil Hills, one of the chain of villages across three counties known as the Hillfoots Villages. The villages are on the A91 around three miles north-east of Dollar in Clackmannanshire.

The parish boundary is somewhat eccentric and extends to the outer edge of Dollar, some three miles west. Due to this fact, the primary school is somewhat oddly located; the 1876 Act required the school to be at the centre of the parish but since the parish stretches far to the west of Pool of Muckhart, the school is accordingly over half a mile west of the outer edge of the village. It is also some considerable distance from the main road, but this can be explained in that it lies on the old coach road to Dollar. The old road is now just a dirt track to the school (locally known as the Cinder Path). West of the school the old coach route is very hard to follow.

The famed, historic Rumbling Bridge across Rumbling Bridge Gorge of the River Devon (which forms the parish's southern boundary) is about 300 yards south of the Muckhart Golf Course on the A823. 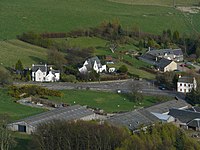 Yetts o' Muckhart is a hamlet about a quarter of a mile east of Pool of Muckhart. A tollhouse was established here in the early 19th century on a road used by cattle drovers and coaches; 'Yett' is a Scots and Northumbrian word for "gate" (from the Old English geat).

The name of this hamlet has been a gift for comedians. Its name has been used for comic effect in several comedy programmes; notably Channel 4's Absolutely. 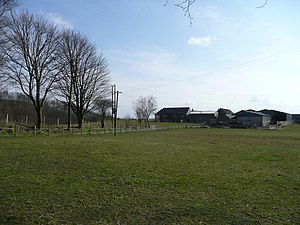 Lees or Leys of Muckhart

Lees of Muckhart is a hamlet, if that, in the parish, and now constitutes but a single farm. It lies just west of the school on the old coach road. 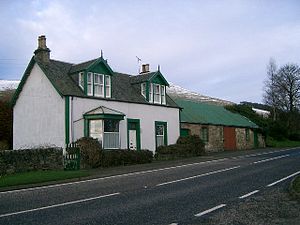 Baldiesburn is a hamlet somewhat depleted in size, standing on the main road west of the Pool of Muckhart. It now has only two houses. It has lost several buildings but was previously a small industrial centre. Of interest, the sheds still attaching the eastern building were built as a blacksmith's forge around 1700. The building to the west was a carpenters, but most of its sheds are now gone. The buildings on the south side of the road were removed when the main road was straightened c.1970. Also obliterated by this roadworks, the village curling pond stood some quarter of a mile further west. 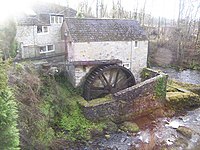 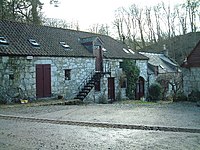 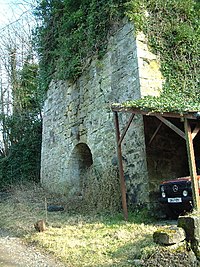 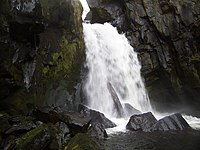 Slightly to the south-west of the Cowden estate, well off the current main road, lies Muckhart Mill at the confluence of Hole Burn, which powered the Mill, and the River Devon.[1] In more recent years this was connected to the Elmhirst family who were directly linked to the Elmhirsts of Dartington Hall, Devonshire, and to the Haggard family by marriage. Rider Haggard was the author of the infamous novel "She".

Later on, the Douglas family sold the mill to Bishop James Paton text[3] who subsequently passed ownership of the farm to Archibald Campbell, 5th Earl of Argyll in about 1571.

It is believed to have one of Scotland's largest overshot waterwheels which was renovated into working condition by the current owner several years ago but is no longer in operation.

There is an inscription on the side wall of the Mill house "M.I.M. 1666" as identified by local postie and amateur historian, Alan Ritchie on 6/9/14.

It is believed that Robert Burns would have passed by Muckhart Mill on 27 August 1787 while staying at Harvieston as recorded in his diary: "Monday.—Go to Harvieston. Go to see Cauldron Linn, and Rumbling Brig, and Deil's Mill Return in the evening."[4] While staying at Harviestoun Burns wrote two poems, "The Banks of the Devon" and "Fairest Maid on Devon Bank".[5] Burns fell for the charm and beauty of Charlotte Hamilton but she was more attracted to Burns' friend, Adair whom she later married.

Adjacent to the mill lies Muckhart Mill Farmhouse, a category B listed property described as a house of "single-storey and attic with swept dormers dated (17)80; later wooden porch: steading single-storey, partly with loft, pantiled and white-washed".[1]

Further up the farm track lies a category B listed Limekiln. Described as "Mid 19th century. Very large, about 35' high, square plan, stone-built with battered walls, 3 arched fireholes; operated by the Carron Company."[6] The Carron Company was at the forefront of the Industrial Revolution in the United Kingdom and who built the Carron iron Works in 1759 that Burns attempted to visit on "Sunday, August 26.—Camelon, the ancient metropolis of the Picts, now a small village in the neighbourhood of Falkirk. Cross the Grand Canal to Carron." He attempted to visit the iron works but, being a Sunday, was refused entrance. Both travellers instead withdrew to the Carron Inn opposite. They dined on the second floor of the Inn and Burns later recorded the event briefly in his journal of the tour - Carron-breakfast. However, he also vented his anger, by scoring a few lines of prose on one of the Inn's windows. He used a diamond-tipped stylus which had earlier been presented to him in Edinburgh by James Cunningham, 14th Earl of Glencairn:

At Carron Ironworks
We cam na here to view your warks,
In hopes to be mair wise,
But only, lest we gang to hell,
It may be nae surprise:
But when we tirl'd at your door
Your porter dought na hear us;
Sae may, shou'd we to Hell's yetts come,
Your billy Satan sair us! [7]

In the same locale lies Vicar's Bridge. Sadly the historic bridge was replaced by a modern structure in the 1960s. Of note here, was a murder in the late 19th century of a passer-by a certain Joe Bell. A tree known as "Joe Bell's tree" had the letters JB carved on it and allegedly were carved whilst he waited for a victim. This could of course have been added after the event for dramatic purposes. Joe Bell had the unfortunate claim to fame of being the last man publicly hanged in Scotland (in Perth) on 22 March 1868.[9]

Back on the main road to Dollar the small farm known as Shelterhall was bought in a derelict state by the Longmuir brothers of Bay City Rollers fame in the late 1970s and temporarily became a place of "pilgrimage" for some years during the period of "Rollermania", which was rife at that time. The brothers also purchased and ran the "Dollar Arms" in Dollar to the west.

Of the Parish of Muckhart, two historical reports by ministers of the Gospel exist.[10][11]