The County of Denbigh is a shire in northern Wales. It is a maritime county, bounded to the north by the Irish Sea, to the east by Flintshire, Cheshire and Shropshire, to the south by Montgomeryshire and Merionethshire, and to the west by Caernarfonshire.

Denbigh, after which the county is named, is the county town, but the largest town is the industrial town of Wrexham at the south-east edge of the shire, near the Shropshire border. All along the coast are nineteenth-century seaside resorts, such as Colwyn Bay, and these continue as such today.

The most important industries in Denbighshire are agriculture and tourism. 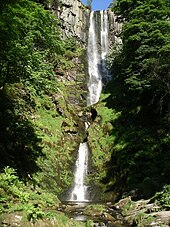 In the south and west of the county are high mountains of the Cambrian range. The hills of the Clwydian Range in the east of the shire rise from 1,000 to 2,500-feet high. There is in contrast a broad coastal plain on which many of the county's towns are found, and its famed seaside resorts.

The county top is the south summit of Cadair Berwyn, standing at 2,726 feet above sea level in the Cambrian Mountains, approaching Snowdonia, and it is in these hills that Denbighshire's highest mountains are found. Either side of the county top itself and on the same ridge are two summits mapped at equal height; Cadair Berwyn and Moel Sych to the south on the same ridge both at 2,713 feet.

The hills of the Clwydian Range are far more gentle but it is from these hills tumbles Pistyll Rhaeadr, a spectacular 240-foot waterfall, the highest in Wales. On the ridge of these hills runs the border with Flintshire.

In the south the Clocaenog Forest reaches its highest and wildest on the Denbigh Moors or Mynydd Hiraethog.

The chief rivers of Denbighshire are the River Clwyd and the River Dee. The River Conwy runs north along the western border.

The broad, fertile Vale of Clwyd runs south to north at the west side of Denbighshire.

The county is divided into six hundreds: 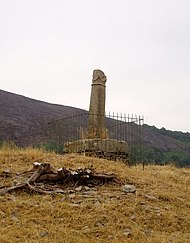 The Romans were here; they had a fort at Abergele.

After the Roman retreat, these lands fell to the Kingdoms of Powys and Gwynedd. One remarkable remaining monument of the Sub-Roman period is the Pillar of Eliseg, near Valle Crucis Abbey (SJ204442) erected by Cyngen ap Cadell King of Powys (died 855), in honour of his great-grandfather Elisedd ap Gwylog, the inscription of which mentions several individuals described in the Historia Britonum and give a brief history of the deeds of the dynasty.

After the English conquest of North Wales, Denbighland was divided into marcher lordships: Bromfield and Yale, Chirk, Denbigh and Ruthin (Dyffryn Clwyd)

The County or Shire of Denbigh was formally created by the Laws in Wales Acts 1535-1542, out of the lands long known as "Denbighland".[1]

Within the county are the following historic cantrefs: 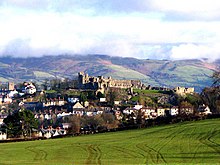 The towns of Denbighshire are:

Things to see in Denbighshire 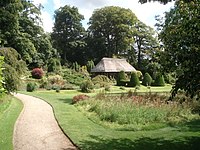