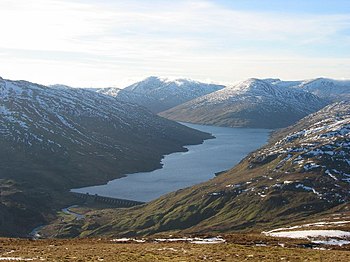 Loch Lyon is a major freshwater loch in Perthshire. It marks the head of Glen Lyon.

A mountainous landscape surrounds the loch, with several mountains over 3,000 feet, known as ‘munros’. The Bridge of Orchy Hills extend from the loch to the north, amongst them Beinn Mhanach (3,127 feet), and the Mamlorn Hills to the south, amongst them Creag Mhòr (3,435 feet) and Beinn Sheasgarnaich (3,537 feet).

The original natural loch was much expanded by a hydro-electric dam, part of the North of Scotland Hydro-Electric Board's Breadalbane Hydro-Electric Scheme.

From the dam at the foot of the loch runs the River Lyon, substantial a tributary of the River Tay, which runs down through the glen eastwards to meet the Tay in the Appin of Dull.