Alyth is a village and parish in Perthshire, standing under the Hill of Alyth five miles north-east of Blairgowrie. The village had a population of 2,301 in 2001. The parish's eastern boundary forms the county border with Angus for most of its length except where 3,334 acres extend across the border to the north.

The settlement of New Alyth lies on the A926 road south-west of the main village. 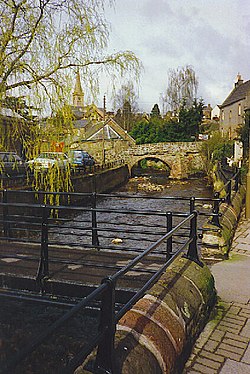 The burn running through Alyth

Alyth is on the banks of a burn which bears its name. It owes its position to a confluence of drovers' roads used by hill farmers to bring their sheep down to market. A picturesque 17th-century pack-horse bridge is among a number of stone bridges[1] crossing the burn in the village. The ruins of the old church, known locally as The Arches, stand in a graveyard in a prominent position at the top of the town.

The village church, completed in 1839 to the design of Edinburgh architect, Thomas Hamilton, dominates the skyline of the town. It is Gothic in style, with Romanesque influences, especially in the windows, and has an unusually high spire. Inside the church is to be found the funeral escutcheon of Sir George Ramsay, sixth baronet of Bamff, who was killed in a duel at Musselburgh, in April 1790 - one of the last duelling deaths in Britain.

In the church porch is preserved a late 7th- or early 8th-century Pictish cross-slab, with a decorated cross on one face and a single Pictish symbol ('double disc and Z-rod') on the other. It was discovered in Alyth in 1887 when ground was being levelled in front of the manse.

To the north-east of the town a hill-fort, possibly of Pictish date, stands atop Barry (or 'barrow') Hill. The remains consist of massive collapsed stone ramparts that take advantage of the topography of the Hill. Local legend connects the fort with King Arthur, and it is claimed that Guinevere, Arthur's queen, was imprisoned here for a short time.

Another nearby early mediæval feature is a Pictish 'Class I' symbol stone in a field on Bruceton Farm somewhat to the east of Alyth. This slab is one of relatively few likely still to be in its original position. It may have marked an ancient burial.

There may have been a Christian presence in this area from early times, since the mediæval parish church was dedicated to St Moluag of Lismore (d. 592), a contemporary of St Columba. The cross-slab mentioned above also suggests this.

Alyth was granted a Charter by King James III in 1488, raising Alyth to the rank of Burgh of Barony with the right to hold markets and fairs.

A late Iron Age souterrain was excavated by a team of Headland Archaeology[2] in Shanzie Farm, about two miles north-east of Alyth.[3] The underground structure was roughly C-shaped in plan and measured circa 40 yards in length. There was a single chamber circa 16 feet long and an entrance to the south-east. For the most part, the souterrain had been badly plough truncated and the walls survived as a single course. The northern terminal of the souterrain was better preserved, where 3-4 courses of wall survive. The chamber here narrowed and had been filled with rubble to a depth. The walls also started to corbell inwards indicating this was originally a stone-capped structure rather than timber roofed. No evidence of an associated settlement or any other surface features were identified; these have undoubtedly been lost to the plough. The structure is typical of the 'southern Pictland group' [4]

The souterrain had clearly been broken into during the Victorian period, but also, during mediæval times. Finds included several types of late prehistoric pottery, a fragment of probable Roman pottery, an amber ring, a pair of tweezers, a brooch or clasp, two copper alloy rings and a fragment from a quern stone. The souterrain was partially backfilled allowing visitors to see the structure in plan.

A golf club was established in Alyth in 1894. The original nine-hole course was designed by Old Tom Morris of St Andrews and was modified and extended to 18 holes by James Braid in 1934. A further two clubs have opened since, the Strathmore Golf Centre (1986) with an 18- and a 9-hole course and the Glenisla Club in 1992.

The town has a small local museum, open in summer, which is run by Perth Museum. This has access to the arches, the oldest buildings in Alyth; as they are unsafe the arches are no longer open to the public.