The County Palatine of Pembroke is a maritime shire at the south-western tip of Wales. Pembrokeshire is washed on three sides by the ocean, and the sea drives deep into the land also at Milford Haven and the Daucleddau. Landwards Pembrokeshire meets Cardiganshire to the north-east and Carmarthenshire to the east.

The local economy is fundamentally of farming and tourism, but international trade and heavy industry are here too, drawn by the county’s harbours: Pembroke is a major port for trade from Ireland and since the 1950s, petrochemical and liquid natural gas industries have developed along the Milford Haven Waterway.

Pembrokeshire is a popular location for filming locations, its rugged, romantic scenery a gift for the director's soaring vision.

The county has a culture of its own. Much of Pembrokeshire, especially the south, has been English in language and culture for many centuries and in the Middle Ages it was heavily settled, first by Flemings and later by numerous incomers from the West Country. The sharp boundary between the English and Welsh speakers was noted in the Victorian period and named the Landsker Line: north of the line the Welsh language remains strong, while south Pembrokeshire in contrast is known as “Little England Beyond Wales”. 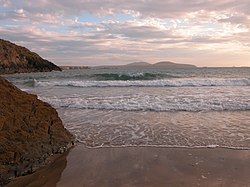 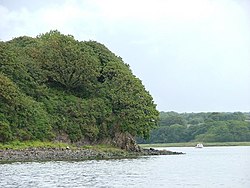 Picton Point on the Daucleddau

A large estuary and natural harbour at Milford Haven cuts deeply into the coast, formed by the confluence of the Western Cleddau (which goes through Haverfordwest), the Eastern Cleddau and rivers Cresswell and Carew. The estuary is bridged by the large Cleddau Toll Bridge which carries the A477 between Neyland and Pembroke Dock; upstream bridges are found crossing the Cleddau at Haverfordwest and Canaston. The Daucleddau above Milford Haven’s port facilities and industry lies deep in the land, tidal, unbridged and unspoilt, protected within the National Park.

Elsewhere the county is relatively flat, most of the land being used for lowland farming of dairy cows, arable crops, oil seed rape, and the well-known Pembrokeshire Potato.

On the coasts are several large bays - Newport Bay, Fishguard Bay, St Bride's Bay - and in the south part of Carmarthen Bay is in the county. Several small islands lie off the Pembrokeshire coast, the largest of which are Ramsey Island, Grassholm Island, Skomer Island and Caldey Island. Along the coast too are several sheltered, sandy beaches.

A 186-mile walking trail known as the Pembrokeshire Coast Path winds along the coastal lands. 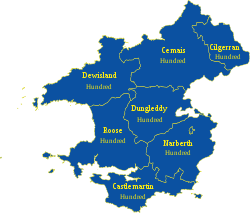 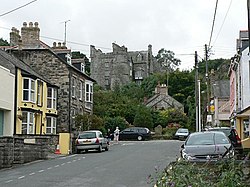 Pembrokeshire was founded as a county palatine in 1138 with Gilbert de Clare as the first Earl of Pembroke. It was divided into hundreds in 1536.

Traces of habitation in the region of Pembrokeshire extend back to 125,000 and 70,000 BCE.[1] By the late Roman Empire period, an Irish tribe known as the ‘’Déisi’’ settled in the region between 350 and 400 AD, and were known to the Romans as the Demetae.

In the post-Roman period, the Irish Déisi had become one with the local Britons, but the name of the Demetae remained and from them the region was known as ‘’Dyfed’’. Dyfed existed as an independent kingdom until its heiress, Elen, married Hywel the Good in 904.[1] 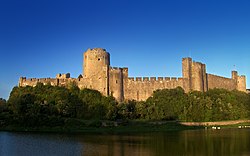 Hwyel united Dyfed with his own maternal inheritance of Seisyllwg, forming the new realm of Deheubarth (“the land of the south” or literally “left-hand”).[1] The region suffered from devastating and relentless Viking raids during the Viking Age. The Vikings established settlements and trading posts at Haverfordwest, Fishguard and Caldey Island.[1]

The Normans arrived between 1067 and 1111.[1] In 1093 Rhys ap Tewdwr of Deheubarth, after all his successful battles against other Welsh princes, fell at Brecon fighting the Normans, leaving his kingdom open for English settlement. Pembroke Castle was founded in 1093, and was the one stronghold which never surrendered to the Princes of North Wales. Further Norman adventurers penetrated further north and built a string of castles where they came, notably at Newport and Robert FitzMartin's stronghold Nevern. The Earldom of Pembroke and a County Palatine, Pembrokeshire, were created in 1138 and conferred upon Gilbert de Clare.

The Welsh princes were hostile to the incomers and the Norman and Flemish presence was precarious. In 1136, Princess Gwenllian of Deheubarth and her children led a rebellion, were defeated and were executed. Gwenllian's brother, Prince Owain Gwynedd, then came from the north seeking vengeance and with Gwenllian's husband, Prince Rhys, he swept down with a formidable army and at Crug Mawr near Cardigan they destroyed the 3,000-strong Norman-Flemish army. The remnants of the Normans fled across the bridge at Cardigan which collapsed and it is said that the River Teifi was choked with drowned men and horses.

Nevertheless, southern Pembrokeshire was secured and settled, protected by castles up to the Presely Hills, and settlers came in great numbers.

Some of the northern princes did overwhelm Pembrokeshire on occasion; Rhys ap Gruffydd in 1189, Llywelyn the Great in 1215, and finally Llywelyn the Last in 1277. War returned when England was convulsed in civil war and Owain Glyndŵr took his chance: in 1405, his French mercenaries landed in Milford Haven.

During the early Middle Ages, St David's was established as place of pilgrimage. During the height of the mediæval pilgrim trade, the journey to St David’s was very popular, and the Church declared that two pilgrimages to St David’s were worth one to Rome, though this perhaps tells one more about the dangers to be faced in the journey in an unsettled age than about the piety of the place. Nevertheless, the pilgrims would then have found a beautiful, peaceful spot at the edge of the wild ocean surrounded by the wonders of God’s creation, as indeed does a modern visitor.

In 1457, Henry Tudor (a descendant, it is believed, of Rhys ap Tewdwr) was born at Pembroke Castle to Margaret Beaufort, the Lancastrian heiress. 28 years later he landed an army not far from his birthplace and rallied support against the Yorkist King Richard III. He marched to Bosworth field in Leicestershire and defeated King Richard’s numerically superior army; the last battle of the Wars of the Roses. As King Henry VII he founded the Tudor dynasty which ruled England and Wales until 1603.

The Laws in Wales Act 1535 abolished the rights of the Earl of Pembroke in the palatinate. The Act ordered the division of Pembrokeshire into hundreds, which followed, with some modifications, the lines of the ancient division into cantrefs, which went back to before the Norman conquest, and it named Haverfordwest as the county town.

The late-eighteenth-century Methodist Revival burst upon Pembrokeshire with devout enthusiasm, and Methodism became (and remains) firmly embedded in the county's culture. John Wesley himself visited Haverfordwest fourteen times between 1763 and 1790. 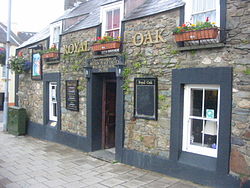 Pembrokeshire was the scene in 1797 of the last armed invasion of Great Britain. On the evening of 22 February 1797, the Légion Noire of the French Republic landed at Carreg Wastad Point, 1,400 strong. This was not the crack unit one would expect to lead a hostile invasion; much of the Légion were the scrapings of French gaols. Discipline broke down at once as farms were looted and deserters fled.

At the news of the invasion, Lord Cawdor called out the Pembroke Yeomanry and local volunteers; a force of no more than 750 men, accompanied by an irregular group of local farm labourers eager to do their part. By the next day the French, those who were left, were well established near Fishguard, but the Yeomanry arrived and swift musketry drove the French back. They surrendered the next day.

A local legend is that local women, who had gathered to gawp on the at Fishguard were, with their traditional black hats, taken by the French for British grenadiers. Less than 48 hours after it began, the last invasion of Great Britain was over, thanks to the swift action of Pembrokeshire's volunteer soldiers.

Tenby, Saundersfoot and the surrounding areas attract the most visitors to their beaches. Those with a view to rambling and wild country will prefer though the cliffs of the west. In the midst of this coastal land is the tiny City of St David’s, attractive in itself but full of history. 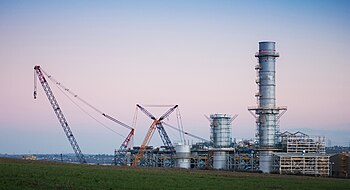 The banks of the Milford Haven Waterway are dominated by the oil and gas industry. Two oil refineries and two large liquified natural gas (LNG) terminals stand here, and a new 2000 MW gas-fired power station is under construction on the site of a previous oil-fired power station.

The two oil refineries in Pembrokeshire are:

A completed but controversial pipeline runs through many rural farms and country sides connecting Milford Haven to Tilbury in Gloucestershire.

Pembrokeshire's mild climate means that crops such as its famous new potatoes often arrive in British shops earlier in the year than produce from other parts of Britain. As well as arable crops such as potatoes, the other main agricultural activities are dairy farming of cattle for milk and cheese, sheep farming, beef production and some other arable crops, such as rapeseed.

Falling farm incomes have led to diversification into other novel farming and tourism related activities. About 74% of the land is used by agriculture. The majority of this land (60%) is down to permanent grassland and 26% is arable. Farm revenues are less than the British average, but agriculture still provides 7,000 jobs.

The flag of Pembrokeshire is one of the oldest county flags in Britain, having been devised in the 1970s by Councillor Peter Stock.

The flag consists of a yellow cross on a blue field, recalling the cross of St David. In the centre of the cross is red and white Tudor rose, to recall that Henry Tudor, King Henry VI, was born in the county, placed on a green pentagon. The rose is not divided red and white etween its inner and outer parts as a heraldic Tudor rose but is counterchanged quarterly.[2][3] The Flag's originators wrote:

The Pembrokeshire Flag is based on the flag of St.David's. The colours of the saint's flag complement Pembrokeshire very well with the blue reminiscent of the sea, and the yellow of summer sunshine. The central rose represents links with the crown, and the red Lancastrian rose was a symbol used by Henry VII, the Welshman who founded the Tudor dynasty and who had many important links with Pembrokeshire. The green pentagon around the rose symbolises the green fields and cliff-tops of this very rural county.[4] 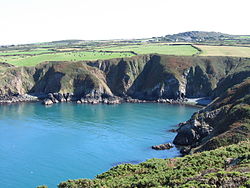