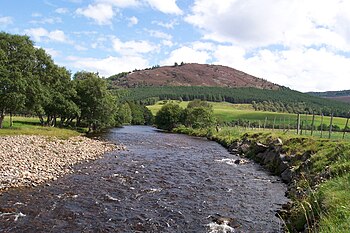 The River Dee near Braemar

The River Dee (Gaelic: Uisge Dè) is a lengthy river which flows mainly through Aberdeenshire, rising high in the Cairngorms and entering the sea at Aberdeen.

The Dee rises at the Well of Dee on the slopes of Cairngorm and flows south and then east. Its basin and that of its tributary rivers forms the district of Mar which is the upper part of Aberdeenshire.

The name of the river is attested as early as the second century AD in the work of the Alexandrian geographer Claudius Ptolemy, as Δηοῦα (Deva), which it has been suggested means 'Goddess', perhaps an indication of the beliefs of the ancient inhabitants of the lands through which it runs. Several other rivers of the same name are found in Great Britain, all of the same origin. The Dee's near neighbour to the north, the River Don, Aberdeenshire also may mean 'goddess'.

The River Dee rises at approximately 4,000 feet in elevation on the plateau of Braeriach, the highest source of any major river in the British Isles.[1] Water emerges in a number of pools and flows across the plateau to the cliff edge, then plunges into An Garbh Choire. The young Dee joins a tributary from the Pools of Dee in the Lairig Ghru and passes between Ben Macdhui and Cairn Toul. It flows over falls in the Chest of Dee on its way to White Bridge, the confluence of the Geldie Burn.

At Linn of Dee the river passes through a 300-yard natural rock gorge. Between there and Braemar, Lui Water (formed by Luibeg and Derry Burns) and Quoich Water join the growing River Dee. Clunie Water and Callater Burn join together and flow into the Dee at Braemar.

The Dee flows almost on its whole course through Aberdeenshire, but for some miles it enters Kincardineshire, watering Banchory, befor in its last miles before the sea forming the border between the two shires.

Before reaching the North Sea, the river passes through Aberdeen harbour. An artificial channel was constructed in 1872 to modify the harbour, which is the largest marine centre in Europe servicing the offshore oil and gas industry.

Footdee ("Fittie") is an old fishing village at the east end of Aberdeen Harbour.

The A93 road runs along its valley from Braemar to Aberdeen.

The Dee is important for nature conservation and the area has many designated sites.[1] The upper catchment is within the Cairngorms National Nature Reserve and (since 2003) Cairngorms National Park. Much of the semi-natural Caledonian pine woods are within the Dee catchment. The area contains nationally rare examples of pinewoods, birchwoods and heather moors with associated wildlife. On the valley floor there are deciduous alder woods, mixed broadleaved woods, and meadow grasslands. Otter, water vole and freshwater mussel are among the animal species under threat.

The Dee is a popular salmon river, having a succession of varied pools, intersected by sharp rapids. In 1995 it was estimated that salmon fishing on the river contributed between £5 and £6 million a year to the Grampian Region economy.

The area around Braemar and Ballater is known as Royal Deeside. Since the reign of Queen Victoria the British Royal Family have spent their summers at Balmoral Castle. Every year the Royal Family attend the Braemar Highland Games and other local events. Birkhall, previously owned by Queen Elizabeth the Queen Mother is now a favourite retreat of Prince Charles.

The royal connection has made this part of Deeside popular for visitors, though the beauty of the landscape here should be enough on its own, for Deeside has some of the finest wild landscape in Britain, and good shooting and fishing too.