The County of Derby is a shire at the northern edge of the Midlands and reaching northward into the Pennines. The southern part of the county is in the plain of the River Trent and its northern and western parts in the Peak District and its tributary hills.

North-eastern Derbyshire, dominated by the town of Chesterfield, has long been an industrial region and encompasses suburbs and outgrowth of the Yorkshire city of Sheffield.

The county borders on Nottinghamshire to the east and Staffordshire to the west, while Cheshire and the West Riding of Yorkshire bound it to the north and Leicestershire sits at its foot in the south. In 2003 the Ordnance Survey placed Church Flatts farm at Coton in the Elms, Derbyshire, as the furthest point from the sea in Great Britain.[1][2]

The city of Derby on the River Derwent in the south of the county is Derbyshire's most populous town and its county town.

A Middle Paleolithic Acheulian hand axe found near Hopton is evidence that man trod these lands as long as 200,000 ago.[3] Evidence of later, nomadic tribes of later ages is found around the limestone caves on the Nottinghamshire border, traces from the Upper Paleolithic and Neolithic periods, and a time when the ice ages would have left the Derbyshire hills as bleak tundra.[4] Deposits left in the caves date the occupancy at around 12,000 to 7,000 BC.[5] 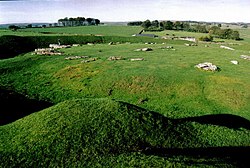 Burial mounds of Neolithic settlers are also situated throughout the county. These chambered tombs were designed for collective burial and are mostly located in the central Derbyshire region.[5] Tombs in Minning Low, and Five Wells date back to between 2000 and 2500 BC.[6] Three miles west of Youlgreave lies the Neolithic henge monument of Arbor Low, which has been dated to 2500 BC.

It is not until the Bronze Age that real signs of agriculture and settlement are found in the county. In the moors of the Peak District signs of clearance, arable fields and hut circles were discovered after archeological investigation. However this area and another settlement at Swarkestone are all that have been found.[7]

The Romans came to Britannia in AD 43 and over the next decades they advanced further north. They were drawn to Derbyshire because of the lead ore in the limestone hills of the area. Romans settled throughout the county and forts were built near Brough in the Hope Valley and Ardotalia near Glossop. A substantial town grew up at Aquae Arnemetiae (Buxton), famed for its warm springs. Near today's city of Derby was a fort named Derventio, in an area now named Little Chester.[7]

Derby was known to the early English as Norþworþig ("North place") and it served as the northern capital of the Mercian kingdom. Several kings of Mercia are buried in the Repton area.[8] The Mercian Burghal Hidage names provinces unlike today's shires, southern Derbyshire was all or part of the land of the Northern Mercians, while the fells to the north were Pecsæte ("Peakset").

Mercia was smashed by the Danes in the ninth century; one of the key battles was a massacre at Repton in Derbyshire, where a few years ago bones were dug up confirming the grizzly tale told in the chronicles. Derbyshire became Danish territory and Norþworþig took the half-Danish name Deoraby. Derby and its territory was liberated only in 917, by the redoubtable Lady Æthelflæd, and Derbyshire was established as it stands today.

Following the Norman Conquest, much of the county was subject to the forest laws. To the northwest was the Forest of High Peak under the custodianship of William Peverel and his descendants. The rest of the county was bestowed upon Henry de Ferrers, a part of it becoming Duffield Frith. In time, the whole area was given to the Duchy of Lancaster. Meanwhile, the Forest of East Derbyshire covered the whole county to the east of the River Derwent from the reign of Henry II to that of Edward I.[9]

In the modern age, Derbyshire's fortunes differed between town and country. The industrial revolution and the railways had the greatest impact. The north-east of the shire was opened up with coal mines, and new industrial towns grew up around them. Derby became an engineering centre. The coming of the railways brought trade to the industrial areas, while Derby was where the locomotives were made.

In contrast, rural life continued in the Peak. Buxton however took advantage of the railways to develop into a spa town, and the fine town we see today is a result of its Regency and Victorian flowering.

In the twentieth century several reservoirs were built, damming the valleys of the upper Derwent. At the same time the Peak District was opened up to hill-walkers. 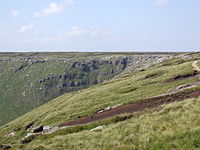 The rugged moorland edge of the southern Pennines at Kinder Downfall

The Magpie Mine near Sheldon

Derbyshire is a mixture of a rural economy in the west, with a former coal mining economy in the north-east, the Erewash Valley around Ilkeston and in the south around Swadlincote. The landscape varies from typical arable country in the flat lands to the south of Derby, to the hill farming of the high gritstone moorlands of the southern Pennines, which effectively begin to the north of the city. This topology and geology has had a fundamental effect on Derbyshire's development throughout its history. In addition it is rich in natural resources like lead, iron, coal, and limestone. The limestone outcrops in the central area led to the establishment of large quarries to supply the industries of the surrounding towns with lime for building and steel making, and latterly in the 20th century cement manufacture. The industrial revolution also increased demand for building stone, and in the late 19th & early 20th century the railways' arrival led to a large number of stone quarries to exploit the natural resources of the area. This industry has left its mark on the countryside but is still a major industry: a lot of the stone is supplied as crushed stone for road building and concrete manufacture, and is moved by rail. The Limestone areas of central Derbyshire were found to contain veins of lead ore, and these have been mined since Roman times.

Its remoteness in the late 18th century and an abundance of fast-flowing streams led to a proliferation of water power at the beginning of the Industrial Revolution, following the mills pioneered by Richard Arkwright. For this reason, amongst others, Derbyshire has been said to be the home of the Industrial Revolution, and part of the Derwent Valley has been given World Heritage status. 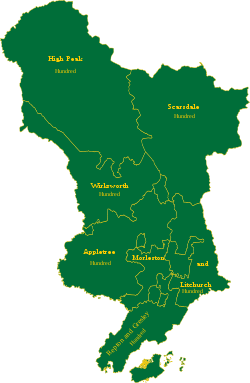 The hundreds of Derbyshire

The county's largest town is its county town; Derby. The other major towns of Derbyshire lie in the Derwent Valley, the Erewash Valley and in the north-eastern industrial area, with a number of modest towns in the Peak District.

Derbyshire County Cricket Club's home ground is in Derby. Chesterfield, Derby and Glossop have all had teams in the Football League.

The county is a popular area for a variety of recreational sports such as rock climbing, hill walking, hang gliding, caving, sailing on its many reservoirs, and cycling along the many miles of disused rail tracks that have been turned into cycle trails, such as the Monsal Trail and High Peak Trail.

In 2002, the plant-conservation charity Plantlife chose the Jacob's Ladder as the county flower.

In September 2006, a county flag was introduced, largely on the initiative of BBC Radio Derby.[10] The Flag of Derbyshire consists of a green cross on which is placed a golden Tudor Rose, which is an historical symbol of the county. The blue field represents the many waters of the county, its rivers and reservoirs, while the cross is green to mark the great areas of countryside.

Derbyshire's stately homes have driven a great deal of literature, in particular Chatsworth House, home to the Dukes of Devonshire. Other writers have drawn inspiration from the grit of the industrial towns.

Things to see in Derbyshire

The scenic Derbyshire that attracts tourists 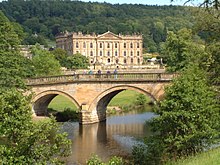 Derbyshire has many attractions for both tourists and local people. The county offers spectacular Peak District scenery and pretty towns. Many fine houses and sights are in the care of the National Trust.

In the north of the county are three large reservoirs: Howden Reservoir, Derwent Reservoir and Ladybower Reservoir. All were built during the early part of the 20th century to supply the rapidly growing populations of Sheffield, Derby and Leicester with drinking water. The land around these is now extensively used for leisure pursuits like walking and cycling, as the surrounding area of moorland is protected from development, as part of the Peak District National Park.

There are many properties and lands in the care of the, located in Derbyshire that are open to the public, such as on the Staffordshire border.