Fortingall is a small village and parish in highland Perthshire, in Glen Lyon. The village is situated near Loch Tay in the south-east of the parish, which extends to the borders with Argyllshire and Inverness-shire. The village's nearest sizeable neighbours are Aberfeldy and Kenmore.

The name of the village appears to be from Gaelic, in which Fartairchill, may be translated as "Escarpment Church".

A local legend makes Fortingall the birthplace of Pontius Pilate, but fails to explain how a Senatorial Roman citizen came to the born amongst the Picts a couple of centuries before the Romans came this way. 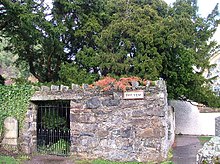 The parish church is on an early Christian site, dedicated to Coeddi, Bishop of Iona (died 712), probably founded about AD 700 from Iona itself as a daughter monastery. Though undocumented, crop-marks of surrounding ditched enclosures have been identified from the air, and the church's unusual dedication and fragments of several finely carved cross-slabs preserved in the church all point to an early origin as a major church site. Also preserved in an alcove in the church is an early hand-bell in Irish style (iron with bronze coating), dating from the 7th or 8th century, one of several to have survived in Highland Perthshire. A massive early font is to be seen in the churchyard and several slabs with simple incised crosses (best paralleled at Iona and other sites in the Hebrides and adjacent coasts).

The attractive white-harled parish church (built 1901-02), notable for its fine woodwork, is open in summer. Its Arts and Crafts style was designed to harmonise with the rest of the village. A permanent display on the cross-slabs and the early church was recently installed in the building. Fortingall has one of the largest collections of early mediæval sculpture in the north.

The Fortingall Yew is an ancient tree in its own walled enclosure within the village churchyard. Its age is estimated to be between 2,000 and 5,000 years, and it may be the oldest living tree – perhaps even the oldest living thing – in Europe.[1] Place-name and archaeological evidence hint at an Iron Age cult centre at Fortingall, which may have had this tree as its focus. The site was Christianised during the Dark Ages, perhaps because it was already a sacred place.

The attractive village of Fortingall, with its large hotel adjoining the churchyard, was built 1890-91 by shipowner and Unionist MP, Sir Donald Currie (1825–1909), who bought the Glenlyon Estate, including the village, in 1885. It was designed by the architect James M MacLaren (1853–90) and built by John McNaughton. The thatched cottages are notable examples of a planned village built in vernacular style (here combining both Lowland Scottish and English influences, notably from Devon) and are increasingly appreciated as one of the most important examples of 'arts and crafts' vernacular style. The Fortingall Hotel, recently (2006–07) restored to its original appearance, is an important example of Scottish vernacular revival. Based on the tower-houses and burgh architecture of the 16th and 17th centuries, but in a modern idiom which anticipates the buildings of Charles Rennie Mackintosh, whose work MacLaren influenced.

Glenlyon House, and its adjoining Farm and steading, west of the village, were also designed, or largely rebuilt, to MacLaren's designs.

The area immediately surrounding Fortingall has one of the richest concentrations of prehistoric archaeological sites in Scotland, including Càrn nam Marbh ('Cairn of the Dead'), a re-used Bronze Age tumulus that is said to have been used as a burial ground for plague victims in the 14th century. Other sites include Fortingall stone circle, standing stones including the Bridge of Lyon, 'four-poster' stone settings, 'ring-forts' (massive Iron Age house enclosures), many cup and ring marked stones (including one dug-up, and preserved, in the churchyard) and an extremely well-preserved mediæval homestead moat, thought by early antiquarians to be of Roman origin because of its regular shape.

Fortingall parish (now linked with Glenlyon) is one of the largest on Scotland, and takes in Glen Lyon, notable for its mountain scenery and many archaeological sites, the country's longest enclosed glen or mountain valley.