Middlesex is one of the smallest counties of the United Kingdom, exceeding only Rutland, West Lothian, Kinross-shire and Clackmannanshire in size. However, it is also one of the most populous, being almost wholly swallowed up by London and its suburbs.

Middlesex has been called "the Capital County" as the home of the capital city (whether you think that is London or Westminster). Unbroken townscape stretches from one side of the county to the other. This does however just link town to town without always erasing the distinctiveness of each Middlesex town and village. Most distinctive are the City of London and the City of Westminster adjoining it, the former housing the financial institutions of the kingdom and the latter its social, cultural and political institutions, and of course the top shops. The City of London is unique in being governed mainly by the business community which are its main inhabitants. London by whatever definition is a unique and fascinating city, and one of the most popular tourist destinations in the world.

The change of perceptions, the growth of London and its monolithic grip on the imagination, has confined the name of Middlesex in many minds to the outer suburban fringe. Here there is a distinct suburban life. This is a mixture of calm communities, small towns and the London commuter belt. Within it towns such as Enfield, Ruislip and Uxbridge are distinct and loathe to call themselves "London".

Some rural life survives along the Colne Valley forming Middlesex's western boundary and the northern stretches surrounding Potter's Bar. Potters Bar itself is a town separated from the conurbation, if individually urbanized in its own way.

Middlesex is on the north bank of the River Thames, bounded on three sides by rivers, namely the Thames to the south, the Colne to the west (or leastwise its old course) and the Lea to the east. In the north the boundary is mostly formed by a ridge of hills broken by the Barnet valley, though the boundary around Barnet is winding and somewhat hard to follow.

Geographically, Middlesex is low-lying and contained within the basin of the River Thames, which forms the southern boundary. The highest point of the county is on the High Road, Bushey Heath at 502 feet above sea level, just yards from the Hertfordshire border.

The Hundreds of Middlesex

The county is divided into six hundreds:

The City of London has been self-governing since at least the thirteenth century and probably since before the Norman conquest of 1066.

The landscape of Middlesex is overwhelmingly urban. From early times Middlesex has been dominated by its greatest town, London. The City of London, wealthy and politically independent since time immemorial, is on the Thames in the south-east of Middlesex and form there has dominated the county from a very early time.[1] The county was significantly affected by the expansion of the metropolitan area of London from the 18th century, and by the 1950s, almost the whole of Middlesex had been consumed beneath the urban sprawl. 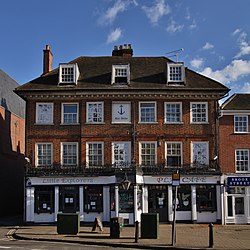 The name Middlesex is from the Old English Middelseaxe, which means Middle Saxons and refers to the tribal origin of its inhabitants. The earliest surviving use of the name is in 704 in a charter granting the estate of Twickenham to Bishop of Waldhere,[2] appearing as Middleseaxan.

The Romans were responsible first development of Middlesex, for while their Londinium was almost certainly on an existing town site, they effectively founded London, on the site of today's City, and it became one of the great cities of the Empire. The Romans built roads out of London all across Middlesex and villas appeared. Ad Pontes at Staines was a major Roman bridging point.

A map showing the outline of those parts now adjacent to the county of Essex (in grey) but which historians postulate were part of the ancient Kingdom of Essex before becoming detached during the middle of the 8th Century.

The economy of the county was dependent on the City of London from an early time and was primarily agricultural.[1] All manner of goods were provided for the City, including crops such as grain and hay, livestock and building materials. Tourism in early resorts such as Hackney, Islington and Highgate also formed part of the early economy. However, during the 18th century the inner parishes of Middlesex started to function as suburbs of the City and were increasingly urbanised.[1] 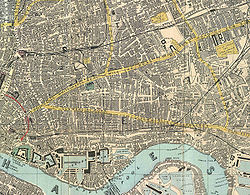 Map of 1882 showing the urbanisation of the East End

The populations clustered towards London. By the seventeenth century the docks grew new townships, which spread along the roads to the City and iIn the eighteenth century the great estates were laid out in what became the West End, effectively expanding London westwards. Lower-class developments continued to spread too. By the 19th century, the East End of London had expanded to the eastern boundary with Essex, and the Tower division had reached a population of over a million.

The railway in the Victorian Age had the greatest impact on Middlesex and accelerated the building of new suburbs, strung along the lines, until the suburbs met each other and merged in the grand conurbation thus created. Industry followed, and though Middlesex was left behind in the early industrial revolution, it overtook the heartlands of Lancashire, Lanarkshire and Yorkshire when electrical machines replaced the steam-driven power-shafts that fed the northern factories.

The rapid urbanisation of Middlesex has made it a laboratory of experimentation in administrative innovation, allowing systems to be tested there which were later used (or rejected) elsewhere as urbanisation proceeded apace.

The City of London has been self-governing since before the Norman conquest; one of William the Conqueror's earliest charters was a charter in English confirming the rights of the city. During the Middle Ages the City created a mayoralty and gave a role in government to its trade guilds, both of which remain, and repeatedly adapted its ancient institutions to create the multiplicity of levels and institutions the Corporation still has. Richard I granted all Middlesex to the city in fee; the city governed Middlesex and appointed two sheriffs over it and collected its taxes in return for a fixed payment to the Crown. The right to appoint sheriffs ended only in 1889.

Police forces were first introduced here: in 1749 came the Bow Street Runners and in 1829, the first official police force in Great Britain, the Metropolitan Police.

The Metropolitan Board of Works was created in 1855 to take charge of the dire state of public infrastructure in the metropolis around London, later to be replaced by the London County Council. The latter was intended by Lord Salisbury as one-off municipal authority council for the particular needs of the conurbation, but the plan became the model for such "county councils" across England and Wales, all created in 1889. Even this was deemed inadequate by 1965, when a "Greater London Council" was created (covering almost all of Middlesex and parts of neighbouring shires) and which endured for twenty years. The "Greater London Authority" is another sui generis innovation created with the same intent. 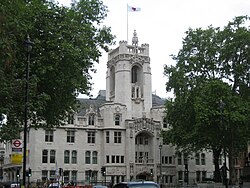 The Middlesex Guildhall at Westminster

The commentary to Thomas Moule’s map of Middlesex of in 1830, asserts London to be the County Town of Middlesex.

Brentford may make a claim on the basis that the freeholders of the county met there, at The Butts, to elect to Parliament their two knights of the shire. and these basis for this place being the "county town" is supported by the Gentleman’s Magazine in 1806 saying that, "It is said that if elections are held for 40 years in a particular town, it becomes the County Town".) Even so, before Brentford was established as the place, the county electors had met on Hampstead Heath (of which "Parliament Hill" on the heath was itself an ancient meeting place pre-dating the Anglo-Saxon Conquest). The Quarter Sessions, which governed the shire, met in Clerkenwell, a small distance outside the City of London, but now long absorbed into the London conurbation and the County Assizes for Middlesex were held at the Old Bailey in the City of London itself.

Where the common law county court, the shire-moot, met in its effective days is uncertain. (The last notable judicial sitting was to pass the outlawry on John Wilkes, "at The Three Tuns in Brook-street in the parish of Holborn".) The "Ossulstone" at Tyburn is regarded as a likely candidate for the earliest "shiremoots". The county electors which last met at Brentford were in technical terms the "shiremoot", whether they knew so or not.

The Flag of Middlesex portrays three seaxes beneath a Saxon crown; a seax echoes the name of the county ('Middelseaxe) and the crown its ancient origin.

Coats of arms were attributed by the mediæval heralds to the Anglo-Saxon Kingdoms and the shield assigned to the Kingdom of Essex depicted three "seaxes", shown as short, notched swords, on a red background. These arms were used by the Justices of Middlesex (and they are seen all over the Sessions House on Clerkenwell Green.

A new, distinctive shield was officially granted to the Middlesex County Council in 1912 after it was noted that the county councils of Essex, Middlesex and London were all using the same blazon of arms, which was:

Gules, three seaxes fessewise points to the sinister proper, pomels and hilts and in the centre chief point a Saxon crown or.

The undifferenced arms of the Kingdom were eventually granted to Essex County Council in 1932.

The new shield soon became associated with Middlesex. A white flag with the shield is flown from the tower of the Middlesex Guildhall every year on Middlesex Day. A banner of the arms has been registered as the county flag of Middlesex by the Flag Institute.[3] 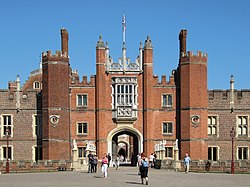 Middlesex Day' is the 16th May in each year; the county day. It commemorates the Battle of Albuhera fought and won in Spain in 1811 during the Peninsula War. At Albuhera the 57th (West Middlesex) Regiment held back and defeated a vastly superior French assault, standing under shot and shell without moving a step backwards; the dead were found still in their unbroken ranks. At Albuhera their injured commander called out "Die hard, 57th! Die hard!", which earned the regiment its nickname; the Die-Hards.

In 2003, an early day motion in the House of Commons noted the celebration of the 16th May, the anniversary of Albuhera, as Middlesex Day.[4]

Sir John Betjeman, a native of Middlesex and Poet Laureate, published several poems about Middlesex and the suburban experience. Many were featured in the televised readings Metroland.[5] One his popular poems is simply named "Middlesex" and is a memory for the lost fields of Middlesex:

Gentle Brent, I used to know you. Wandering Wembley-wards at will,
Now what change your waters show you. In the meadowlands you fill!

In 2002, the plant conservation charity Plantlife chose the wood anemone (Anemone nemorosa) as the county flower.