The village of Stanley gains its name ultimately from Lady Amelia Stanley, the daughter of James Stanley, 7th Earl of Derby. In the 1600s the area around Stanley was part of the estate of Earls of Atholl and was also the location of Inverbervie Castle. In 1659 the castle was renamed Stanley House in honour of the wedding of John Murray, 1st Marquess of Atholl and Lady Stanley. When the village was built in the 1700s it took the name Stanley after the nearby house.

John Murray, the 4th Duke of Atholl, decided, in the 18th century to harness of the nearby River Tay to power a cotton mill., Richard Arkwright, an inventor of cotton-spinning machinery was persuade by, George Dempster (the Local MP), when Dempster was visiting Cromford in Derbyshire, to come to Perthshire to set up a cotton mill in Stanley as well as one at New Lanark. Stanley Mills opened in 1787, and by its 10th year employed 350 people.

The village of Stanley was built to house the workers of the mill. Work on the village began in 1784. It was designed by the Duke of Atholl’s factor James Stobie. By 1799 the village’s population was around 400, and by 1831 it had reached around 2000 residents, about 50% of whom worked in the mill.

Much of Stanley's economy was based on a mill powered by the River Tay. The mill mostly produced cotton but also cigarette ribbon. The Dempster & Co company was established in 1787 by seven men including Richard Arkwright, George Dempster and William Sandeman to build the mill on land feued from the Duke of Atholl to provide employment to Highlanders affected by the clearances.[1]

The mill extracted gas from coal to run lighting, this was replaced in 1921 when a hydroelectric power plant was built which supplied electricity to the village as well as the mill. The power station was closed in 1965 but was reopened in 2003 by npower (UK).

During the 1960s and 1970s the mill was in decline and finally closed down in 1989. After that the mill fell into dereliction. The buildings were later renovated and turned into private flats and a museum depicting life in the 19th century and the story of the mill.[2]

A railway station was built in Stanley in 1848. This later evolved into a junction station, as it lay at the point where the branch line to Forfar broke off from the main line from Perth to Inverness. The Perth Inverness line still runs though the village, however, but the station was closed in 1956.

Ballathie House was built during the 1850s near Stanley. It was built by the Robertson family, the land having originally been owned by the Drummond family, the Earls of Perth. Since 1972 it has operated as a country house hotel. 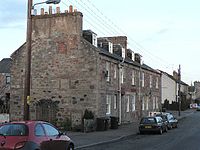