The County of Buckingham is a shire in southern England. A distinctively shaped inland county, it reaches from the Salcey Forest in the north to the banks of the Thames in the south.

The delightful Chiltern Hills, sweeping through the south of the county, give the shire much of its character; with beech woods in the west, rising to higher, more windswept landscape around Ivinghoe Beacon, and all full of pretty villages of flint and thatch. It provides fine walking country. The more gentle, pastoral Vale of Aylesbury lies north of the Chilterns.

Buckinghamshire's short southern boundary is the River Thames, which above Slough is considered the finest stretch of that river. In the north of the county, along the Great Ouse, Milton Keynes has been dropped across the landscape; a sudden, planned New Town of the 1970s, in ironic contrast to Buckingham to the west, an ancient and very picturesque town.

The county town is Aylesbury in the Vale of Aylesbury, a central position. The county's largest towns are it the very northern and southern ends; Slough in the south close to the River Thames and Milton Keynes, a new town, in the north in the plains of the River Great Ouse.

Sections of the county closer to neighbouring Hertfordshire and to the influence of London are part of the Metropolitan Green Belt, which prohibits excessive development.

Buckinghamshire may be split into two sections geographically. The south leads from the River Thames up the gentle slopes of the Chiltern Hills to the more abrupt slopes on the northern side leading to the Vale of Aylesbury, a large flat expanse of land, which includes the path of the River Great Ouse.

The two highest points in Buckinghamshire, both 876 feet above sea level, are Coombe Hill near Wendover and Haddington Hill in Wendover Woods.

Southern Buckinghamshire forms the outer part of the London commuter belt spreading out from neighbouring Middlesex. The county's proximity to Middlesex has mean that some major routes carve their way through the county, including no fewer than four motorways; the M40 through the Chilterns, the M1 passing Milton Keynes in the north, the M25 for a few miles by the Middlesex border and the M4 motorway in the southern tip. Several major A roads pass through Buckinghamshire as well, though since these large routes serve traffic to and from the London conurbation, travel within the county itself is difficult and cumbersome, there being few big roads to serve internal travel.

The county includes two of the four longest rivers in Britain; the Thames and the Great Ouse. The Thames forms Buckinghamshire's southern boundary, with Berkshire. On its banks are several pretty riverside villages, amongst them Datchet, Eton (home to the famous school) and the town of Marlow.

The Great Ouse rises in Northamptonshire and flows through six counties before reaching the sea. In its upper reaches it passes through Buckingham, along the northern edge of Milton Keynes (where for a time it forms the boundary with Northamptonshire) and to Olney.

The main branch of the Grand Union Canal flows through the county as do its arms to Slough and Aylesbury and disused arms to Buckingham and Wendover. The canal has been incorporated into the structure of Milton Keynes. 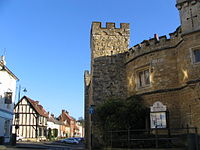 Buckingham and the Old County Gaol

Buckinghamshire takes its name from its original county town, Buckingham, whose name in turn is form the Old English Buccingaham ("Bucca's kin's home"). The Mercian underkingdom of Cilternesæte ("Chiternset") was in these hills. Buckinghamshire first appears in the Anglo-Saxon Chronicle (as Buccingahamscir) in 1010[1]

The Early Middle Ages brought war, the later Middle Ages calm agricultural prosperity. In the 17th century the Buckinghamshire Chilterns became a heartland of Puritanism, which shaped local politics into a new, resistant form. John Hamden of Great Hampden was a vocal parliamentarian and his resistance to King Charles's demands for ship money that forced the King to treat Parliament seriously. Thus in these hills began the English Civil War.[2] Hamden himself became a leader of the Parliamentarian party, a position he lost to Cromwell only by his death in 1643 of wounds received in battle at Chalgrove Field.

The biggest demographic change to the county came in the 19th century, when a combination of cholera and famine hit the rural county, forced many to migrate to larger towns to find work. Not only did this alter the local economical picture, it released a great deal of land, sold at low prices and leafy Bucks became a popular rural idyll: an image it still has today. The Metropolitan Railway extended into Buckinghamshire from 1889, which line now forms the uttermost part of the London Underground system and its Metropolitan Line.

Buckinghamshire is a popular home for London commuters, a factor in great local affluence. 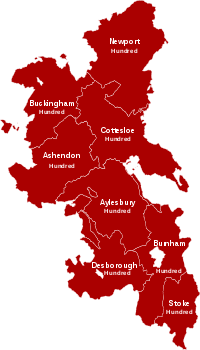 The Hundreds of Buckinghamshire

The county is divided into eight hundreds. These are:

*: These hundreds are collectively known as the Chiltern Hundreds.

The main towns of Buckinghamshire are:

The traditional badge of Buckinghamshire is a white swan. The ancient arms of the Borough of Buckingham were a white swan in chains on a field per pale gules and sable (red and black). Now the same arms, with a golden chief added for difference, are used by the county council which borrows the county's name.

The origin of the swan badge is unknown. Some claim it is as old as Anglo-Saxon times, related to swan-breeding, others that a swan is in chains illustrates that the swan is bound to the monarch. At the Battle of Agincourt it is said that the men of Buckingham bore a swan as a badge,[3] Humphrey Stafford, 1st Duke of Buckingham is said also to have borne arms with a swan.

In May 2011, the Flag Institute accepted the traditional emblem as the flag of Buckinghamshire.

Buckinghamshire rightly known for its open countryside and fine natural features. The Chiltern Hills (an "Area of Outstanding Natural Beauty") and the River Thames are best known.[4] The county is also home to many historic houses, some of which are open to the public through the National Trust such as Waddesdon Manor, West Wycombe Park and Cliveden and others which still act as private houses such as the Prime Minister's country retreat, Chequers.