Meikleour, pronounced [mɪˈkluːɾ], is a village in Perthshire approximately twelve miles north of Perth and four miles south of Blairgowrie.

The main claim that Meikleour has to fame is the Meikleour Beech Hedge; the tallest and longest hedge in the world. 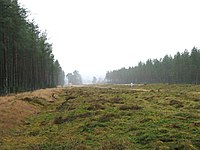 There are ancient sites here too: the Cleaven Dyke runs across the land in the Meikleour Woods. Once is was thought to be a Roman defensive structure, so impressive is it. Later excavation though revealed that it was in fact a Neolithic cursus - a ceremonial earthwork. In the Stone Age when it was built, it must have been one of the largest and most labour-intensive monuments in the north. The dyke runs for a mile and half through an area that is now planted by coniferous forestry, and is around six feet high and 10 yards wide in the best-preserved sections. The dyke also incorporates a central mound.[1] many a theory, both academic and fanciful, has been put forward to explain the purpose of the structure and others of its kind.[2] 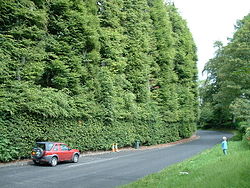 The Meikleour Beech Hedge(s) grow near Meikleour, alongside the A93 Perth to Blairgowrie Road. The hedge has been growing since it was planted in 1745 and consist of beech trees (Fagus sylvatica),

In the autumn of 1745, Jean Mercer and her husband, Robert Murray Nairne planted the hedge on the Marquess of Lansdowne's Meikleour estate. The local romantic legend is that the hedge grows towards the heavens because the men who planted it were killed at the Battle of Culloden the next year in 1746. The legend does not go on to explain which side the planters fought on.

The hedge is noted in the Guinness World Records as the tallest and longest hedge on earth, reaching 100 feet in height and a third of a mile in length. The hedge is trimmed once every ten years, and can be viewed by visitors all year round.