Dull is a village and parish in Perthshire, in the Highland part of the county. The village consists of a single street of houses on the north side of the valley of the River Tay, however the parish extends from Loch Tummel in the north to Loch Freuchie in the south.

The name of the village may mean 'meadow' in Gaelic. However, Duncan Campbell relates a traditional tale in "The Lairds of Glenlyon" (1886) which connects the Gaelic word 'dul' (snare) with the withies on the hearse of St Adomnán snapping, thus deciding his burial-place and the founding of Dull. 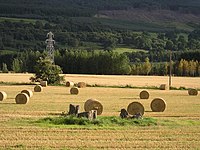 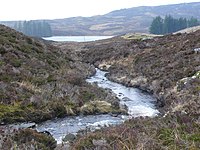 A burn flowing into Loch Farleyer by Dull

The parish church, unused since the 1970s, is on the site of an early Christian monastery founded by St Adomnán (Scottish Gaelic: N. Eònan), Abbot of Iona (died 704). Several early Christian cross-slabs dating to the 7th or 8th century have been discovered in and around the parish graveyard. A slab carved with stylised warriors and horsemen in the Pictish style, uncovered during grave-digging in the 19th century, is displayed in the Museum of Scotland, and may have formed part of a wall-relief, or one side of a box-shrine. A massive font of rough workmanship, preserved by the church door, is also a probable relic from the early monastic site.

The surrounding district is known as the Appin of Dull, the name 'Appin' deriving from Old Irish apdaine, 'abbacy', referring to the former monastic estate, which gives us the name of Appin in Argyllshire; the 'abbey lands' (in the Argyllshire those of the major early Christian monastery of Lismore). Four undecorated crosses, of which three survive, one at Dull itself, and two in the nearby old church at Weem, once stood around the monastic precinct, defining an area of sanctuary.

During the later Middle Ages, and up to modern times, the church at Dull was merely a parish church in the Diocese of Dunkeld. It is not known when the early Christian monastery ceased to function.

In decline for much of the 20th century, with its church and school both going out of use, the small village has seen the construction of several new houses, and the restoration of older buildings, in recent years. 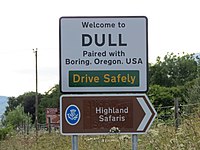 Dull has been twinned with Boring in Oregon since 2012.

The pairing was proposed Elizabeth Leighton of Aberfeldy, who had passed through Boring while on a cycling holiday in the western United States.[1] In June 2012, the American town of Boring accepted the proposal of Dull to "pair" their municipalities, in an effort to promote tourism in both places as a play on their names.[2][3][4] The Boring Community Planning Organization issued commemorative "Boring & Dull: a pair for the ages" T-shirts and mugs, raffling off a trip to Dull.[5] The Boring CPO will not be attempting to get the pairing recognised by the US-based Sister Cities International.[6]

In 2013, Bland Shire, a farm community and former gold prospecting site in the Riverina region of New South Wales joined the initiative,[10][11] creating not a "twinned town" relationship but a "League of Extraordinary Communities" to group Dull, Boring and Bland[12][13] as a means of encouraging travel,[12] promoting all three communities.[14][15]