The County of Anglesey is an island shire off the north-west coast of Wales, separated from the mainland of Great Britain by the Menai Strait. It is the only Welsh county without mountains.

Anglesey (Welsh: Ynys Môn) is the largest Welsh island, the fifth largest surrounding the island of Great Britain, and the largest island in the Irish Sea ahead of the Isle of Man.

Anglesey is a relatively low-lying island with low hills such as Parys Mountain, Cadair Mynachdy ("chair of the monastery", or Monachdy; there is a Nanner, "convent", not far away), Mynydd Bodafon and Holyhead Mountain. The island is separated from the Welsh mainland by the Menai Strait, which at its narrowest point is about 270 yards wide. 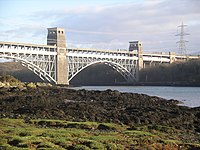 Britannia Bridge from the east along the Menai Strait

Anglesey has several small towns scattered around the island, making it quite evenly populated. Beaumaris, in the east of the island, features Beaumaris Castle, built by Edward I as part of his campaign in North Wales. Beaumaris acts as a yachting centre for the region, with many boats moored in the bay or off Gallows Point. The village of Newborough, in the south, created when the townsfolk of Llanfaes were relocated to make way for the building of Beaumaris Castle, includes the site of Llys Rhosyr, another of the courts of the mediæval Welsh princes, which features one of the oldest courtrooms in the United Kingdom. Llangefni is located in the centre of the island and is also the island's administrative centre. The town of Menai Bridge in the south-east expanded when the first bridge to the mainland was being built, in order to accommodate workers and construction. Up until that time Porthaethwy had been one of the principal ferry crossing points from the mainland. A short distance from this town lies Bryn Celli Ddu, a Stone Age burial mound. Also nearby is the village with the longest official place name in the United Kingdom, Llanfairpwllgwyngyllgogerychwyrndrobwllllantysiliogogogoch. Near it is Plas Newydd, ancestral home of the Marquesses of Anglesey. The town of Amlwch is situated in the north-east of the island and was once largely industrialised, having grown during the 18th century supporting the copper mining industry at Parys Mountain. 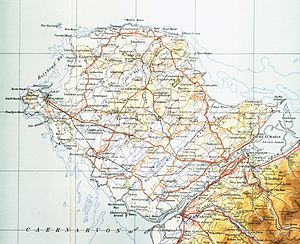 An Ordnance Survey map of Anglesey from 1946

Other villages and settlements include Cemaes, Benllech, Pentraeth, Gaerwen, Dwyran, Bodedern and Rhosneigr. The Anglesey Sea Zoo is a local tourist attraction, providing a look at and descriptions of local marine wildlife from lobsters to conger eels. All the fish and crustaceans on display are caught around the island and are placed in reconstructions of their natural habitat. They also make salt (evaporated from the local sea water) and breed commercially lobsters, for food, and oysters, for pearls, both from local stocks.

The island's entire rural coastline had been designated an Area of Outstanding Natural Beauty and features many sandy beaches, especially along its eastern coast between the towns of Beaumaris and Amlwch and along the western coast from Ynys Llanddwyn through Rhosneigr to the little bays around Carmel Head. The northern coastline is characterised by dramatic cliffs interspersed with small bays. The Anglesey Coastal Path is a 125-mile path [1] which follows nearly the entire coastline. Tourism is now the most significant economic activity on the island. Agriculture provides the secondary source of income for the island's economy, with the local dairies having better output than any others in the region. There is also a nuclear power station, at Wylfa Head on the north coast.

Major industries are restricted to Holyhead which, until 30 September 2009, supported an aluminium smelter, and the Amlwch area, where the Wylfa nuclear power station is located close to a former bromine-extraction plant. The nuclear power station is scheduled to close in or around 2010, and the aluminium smelting operation all but closed down in September 2009, reducing its workforce from 450 to 80; this has been a major blow to the Island's economy, especially to the town of Holyhead. However, the local county council supports extending the closure deadline and building a new nuclear power station at Wylfa.[2] The Royal Air Force base RAF Valley is home to the RAF Fast Jet Training School and also 22 Sqn Search and Rescue Helicopters which provide employment for approx 500 civilians. RAF Valley is now home to the Headquarters of 22 Sqn Search and Rescue.

There is a wide range of smaller industries, mostly located in industrial and business parks especially at Llangefni and Gaerwen. These industries include an abattoir and fine chemicals manufacture as well as factories for timber, aluminium smelting, fish farming and food processing.

Wind power is developing on Anglesey, with more than 20 commercial wind turbines established near the north coast. The strong sea currents around the island are also attracting the interest of electricity generation companies interested in exploiting tidal power.

The island is also on one of the major routes from Britain to Ireland, via ferries from Holyhead, off the west of Anglesey on Holy Island, to Dún Laoghaire and Dublin Port.

There are a few natural lakes, mostly in the west, such as Llyn Llywenan, the largest natural lake on the island, and Cors Cerrig y Daran, but rivers are few and small. There are two large water supply reservoirs operated by the Welsh Water board. These are Llyn Cefni in the centre of the island, which is fed by the headwaters of the River Cefni, and Llyn Alaw to the north of the island.

The climate is humid (much less so than neighbouring mountainous Caernarfonshire and Merionethshire) but generally equable under the effects of the Gulf Stream bathing the island. The land is of variable quality and it was probably much more fertile in the past. 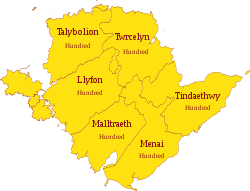 The hundreds of Anglesey

The county is divided into six hundreds, or commotes, which are grouped together into three cantrefs. They are:

Flag of Anglesey
The county flag was established in 2014 after a successful web-based campaign to see a banner of the arms ascribed by later mediæval heralds to the earlier, locally celebrated ruler Hwfa ap Cynddelw, registered as the county flag. 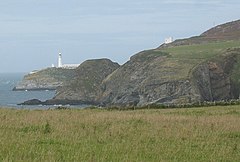