The County of Norfolk is a shire of East Anglia, which along with Suffolk, is one of only two counties entirely east of the Prime Meridian.

Norfolk's long border with its southern neighbour Suffolk is marked by the River Little Ouse from its source to the Cambridgeshire border to the west; and by the River Waveney from its source to the sea, the two rivers rising within yards of each other in Little Fen and flowing in opposite directions. To the west lie Cambridgeshire and Lincolnshire, the latter border running across the drained Terrington Marsh to the Wash. The North Sea washes Norfolk to the east and to the north, a long, flat coast.

The county town is the cathedral city of Norwich.

Norfolk is a large and largely rural with a low population density, of some 400 people a square mile. The main population is centred on the county town, Norwich. It is a county of farms and charms, many visitors brought by the calm or by sights and experiences such as historic Norwich and the Norfolk Broads.

The Norfolk Broads spread out across the east of the county, a network of rivers and lakes in flat countryside and spreading into neighbouring Suffolk. This land is at sea level and here the rivers are embanked, with countless straight, narrow “dikes” (ditches) draining into them across the fields.

The broads themselves are the broad, flat lakes which punctuate the landscape as rivers spread out into reed-filled meres. The broads are popular for sailing and leisure cruising.

The Norfolk and Suffolk Broads Authority is a statutory body similar to those governing the National Parks.[1] 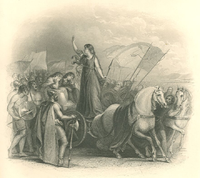 Flint has been quarried and mined in Norfolk since the Stone Age; Grimes Graves are prehistoric flint mines. By the Roman period the Iceni tribe lived in this land. The Iceni resisted the Roman invasion of Britain in AD 47, and revolted in AD 60 led by their famous Queen Boadicea. The rebellion was brutally crushed and the county was opened to the Romans. During this time Roman roads were driven across the land, the routes of some of which are still in use. Norfolk roads and ports were constructed throughout the county and farming improved. Norfolk looks east at the sea, and from here came seaborne raiders from late Roman times. The Romans built forts to defend against them, such as those whose remains are found at Caister-on-Sea and Burgh Castle.

By the 5th century the Angles, after whom East Anglia and England itself are named, had established control of the region, the people divided into the "north folk" and the "south folk"; "Norfolk" and "Suffolk". This period gave the county some of the distinctive place-names it bears, some of the earlier English place-names. The Northfolk became part of the Kingdom of the East Angles (East Anglia). After some years of brilliance, the kingdom fell under the influence of neighbouring kingdoms until in the 9th century the Danes descended upon it and East Anglia became a Danish-English kingdom; Guthrum, whom Alfred defeated, became Christian, took the baptismal name Athelstan and came to Norfolk to rule as King of the East Angles.

In the centuries before the Norman Conquest the wetlands of the east of the county began to be converted to farmland, and settlements grew in these areas, so that by the time of the Conquest and Domesday Book survey of 1086, Norfolk was one of the most densely populated parts of the British Isles.

During the high and late Middle Ages the county developed arable agriculture and woollen industries. The economy was in decline by the time of the Black Death, which dramatically reduced the population in 1349, so that even today the population outside Norwich is small.

Over one-third of the population of Norwich died during a plague epidemic in 1579.[2] By the 16th century Norwich had grown to become the second largest city in England, but in 1665 the Great Plague again killed around one third of the population.[3] During the English Civil War Norfolk was largely Parliamentarian. The economy and agriculture of the region declined somewhat, and during the industrial revolution Norfolk developed little industry except in Norwich and was a late addition to the railway network.

In the 20th century the county developed a role in aviation. The first development in airfields came with the First World War; there was then a massive expansion during the Second World War with the growth of the Royal Air Force and the influx of the American USAAF 8th Air Force which operated from many Norfolk Airfields. During the Second World War agriculture rapidly intensified, and has remained very intensive since with the establishment of large fields for cereal and oil seed rape growing. Norfolk's low-lying land and easily eroded cliffs, many of which are chalk and clay, make it vulnerable to the sea, the most recent major event being the North Sea flood of 1953.

The low-lying section of coast between Kelling and Lowestoft Ness in Suffolk is currently managed by the Environment Agency to protect the Broads from sea flooding. Management policy for the North Norfolk coastline is described in the North Norfolk Shoreline Management Plan which was published in 2006 but has yet to be accepted by the local authorities. The Shoreline Management Plan states that the stretch of coast will be protected for at least another 50 years, but that in the face of sea level rise and post-glacial lowering of land levels in the South East, there is an urgent need for further research to inform future management decisions, including the possibility that the sea defences may have to be realigned to a more sustainable position. Natural England have contributed some research into the impacts on the environment of various realignment options. The draft report of their research was leaked to the press, who created great anxiety by reporting that Natural England plan to abandon a large section of the Norfolk Broads, villages and farmland face to the sea to save the rest of the Norfolk coastline from the impact of climate change.[4] 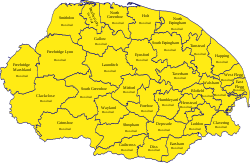 The hundreds of Norfolk

Norfolk's county town and only city is Norwich. Norwich was one of the largest towns in England during the Middle Ages and though now surpassed elsewhere it remains the largest town in East Anglia and the county's main business and culture centre.

Additionally, the town of Wisbech, otherwise in Cambridgeshire extends into Norfolk.

The Norfolk dialect, also known as "Broad Norfolk", is the accent or dialect of people living in Norfolk, although over the modern age much of the vocabulary and many of the phrases have died out through contact with mass media and incomers to the county.

Norfolk has not just one accent but a multiple of subtly distinctive regional dialects which can vary noticeably even across the one county.

More cutting, perhaps, was the pejorative medical slang term "Normal for Norfolk", alluding to the county's perceived status as an illiterate incestuous backwater. Use of term has ever been unofficial, and is now discredited, its use discouraged by the profession.

Norfolk is a popular tourist destination and has several major examples of holiday attractions. There are many seaside resorts, including some of the finest British beaches, such as those at Great Yarmouth, Waxham, Cromer and Holkham Bay. Norfolk is probably best known for the Broads and other areas of outstanding natural beauty and many areas of the coast are wild bird sanctuaries and reserves with some areas given conservation designations, such as the 'Norfolk Coast Area of Outstanding Natural Beauty'. Tourists and locals enjoy the wide variety of monuments and historical buildings in both Norfolk and the city of Norwich.

The Queen's residence at Sandringham House in Sandringham provides an all-year-round tourist attraction whilst the coast and some rural areas are popular locations for holidays and holiday homes.