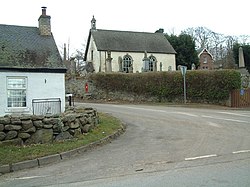 Kinloch is a village and parish in eastern Perthshire. It is bounded by Blairgowrie, Clunie and a small part of Lethendy. It had a population of 187 in 2011. The parish contains Fingask Loch, Rae Loch and part of Drumellie Loch. The village itself sits on the A923 road from Dundee to Dunkeld.

Marlee House is a Category A listed building just south of the A923. Records show its existence in 1484. It was first enlarged in the 16th century and was re-modelled in about 1775, when wings were added to all four corners by James Farquharson of Invercauld Estate, as his Perthshire seat. Although the interior was remodelled in 1890 by the architect, A.J. Meacher, who subsequently inherited the estate and lived there until his death in the 1960s, the exterior is little changed since the late-18th century.