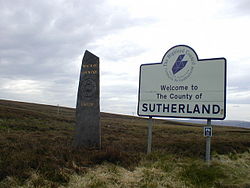 Entering Sutherland on the A836 from Caithness

The County of Sutherland is a shire in the Highlands. Despite its name, meaning "southern land", Sutherland is one of the most northerly of the counties, on the north coast of Great Britain.

A mountainous and sparsely populated county, Sutherland's county town, and its only burgh, is Dornoch on the Firth of the same name.

Sutherland is bounded to the north-east by Caithness and to the south by Ross-shire and by the Ullapool parcel of Cromartyshire. It has two coasts; the gentle east coast of Sutherland is on the North Sea, while the Atlantic Ocean washes the west and north of the shire, a coast far more dramatic. In Sutherland and Caithness is the little-known north coast of Great Britain along which runs the narrow road, the A836. Sutherland has most of this coast and the part with the wildest scenery.

Like its southern neighbour, Wester Ross, the county has some of the most dramatic scenery in the whole of Europe, especially on its western fringe where the mountains meet the sea. These include high sea cliffs, and very old mountains composed of Precambrian and Cambrian rocks.

Name of the county

The county is called Sutherland or sometimes Sutherlandshire. The name "Sutherland" means "southern land", which seems odd for a county which is almost the most northerly in Great Britain. It is a name given by the Norse, Suðrland, who inhabited Orkney, Shetland and Caithness and who spread the rule of the Earls of Orkney into the Highlands. For them, Sutherland was indeed a southern land, lying south of Caithness. (The Norse likewise referred to the Hebrides as Suðreyjar, the "Southern Isles", for they lie south of the islands of Orkney, Shetland and the Faeroes.)

In Gaelic, which was long the dominant language of Sutherland, the name Cataibh was used, though historically it has been applied specifically to the south-east, while Dùthaich MhicAoidh ("Mackay Country") was used for the north-west, sometimes referred to as Reay Country in English. Cataibh can be read as meaning among the Cats, which is also the Cait element in Caithness, though the Gaels called Caithness Gallaibh, meaning among the Strangers (which is to say the Norse). Asainte (Assynt) is the west of the county. 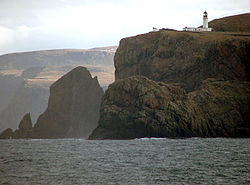 Cape Wrath from the sea 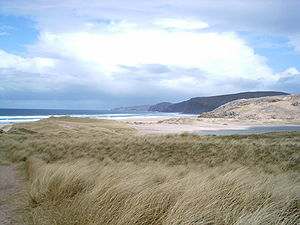 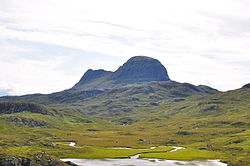 Suilven from the Glencanisp Lodge path

Sutherland's inland landscape is rugged and very sparsely populated. It stretches from the Atlantic in the west, up to the Pentland Firth and across to the North Sea.

Cape Wrath forms a massive headland rearing high up in the north-west; the north-western corner of Great Britain and the turning point between the coasts, it is often beaten by such weather as suggests Cape Wrath is well named. The Cape is isolated from the road network, accessible only by ferry and a long track.

The coasts of Sutherland are marked by soaring sea cliffs and deep fjords in the east and north, ragged inlets on the west and sandy beaches in the north. The north coast west of Cape Wrath changes in character further east. Cape Wrath itself is separated from the main stretch of coast by the Kyle of Durness, a deep fjord, beyond which is Loch Eriboll, a long and broad sea-loch. Around Whiten Head and Rubha Thormaid the delightful Kyle of Tongue cuts into the land by the village of Tongue, and at its mouth are the Rabbit Islands. East of Tongue the coast alternates between cliff and sandy beaches until the Caithness border.

South of Cape Wrath the land is sliced by many ragged sea-lochs: Loch Inchard, Loch Laxford and Loch a' Chàirn Bhàin which opens into Eddrachillis Bay. Numerous lochs, inlents and bays proceed down the west coast, a coast exquisitely rugged and with countless scattered islands and rocks. Finally Sutherland ends at the Summer Isles in Loch Broom, which belong to Cromartyshire.

The county has many fine beaches, a remote example being Sandwood Bay, which can only be reached by foot along a rough track. The number of visiting tourists is naturally, minimal.

The county has many rugged mountains such as Ben Hope, the most northerly Munro.

The western part comprises Torridonian sandstone underlain by Lewisian gneiss. The spectacular scenery has been created by denudation to form isolated sandstone peaks such as Foinaven, Arkle, Cùl Mòr, Suilven and Stac Pollaidh.

These Sutherland mountains are attractive for hill walking and scrambling, despite their remote location. Together with similar peaks to the south in Wester Ross, they have a unique structure with great scope for exploration. On the other hand, care is needed when bad weather occurs owing to their isolation and the risks of injury.

Of the Picts, the first inhabitants, there are considerable remains in the form of brochs; round towers. Other remnants are seen in Picts' houses, tumuli, cairns and hut circles. Dun Dornadilla, in the parish of Durness, 4 miles south of Loch Hope, is a tower, 150 feet in circumference, still in good preservation.

The Norse Earl of Orkney, Thorfinn overran the country in 1034 whence the Norse colonists called it Suðrland, the "southern land".

After the conquest of the district by the Scottish kings, Sutherland was conferred on Hugh Freskin (a descendant of Freskin of Moray), whose son William was created Earl of Sutherland in 1228 by Alexander II.

Assynt was peopled by a branch of the Macleods of Lewis, till they were dispossessed by the Mackenzies, who sold the territory to the Earl of Sutherland about the middle of the 18th century.

The north-western corner of the county was traditionally known as the Province of Strathnaver, and was not rendered under authority until 1601. This was the home of the powerful and warlike Clan Mackay, and as such was named in Gaelic, Dùthaich 'Ic Aoidh, the Homeland of Mackay. Even today this part of the county is known as Mackay Country, and, unlike other areas of Scotland where the names traditionally associated with the area have become diluted, there is still a preponderance of Mackays in the Dùthaich.

The vast tract of the Reay country, belonging to the Mackays, an ancient clan, also fell piece by piece into the hands of the Sutherland family. Killin, on the east bank of Loch Brora, was the site of an old chapel dedicated to St Columba, an association commemorated in the name of Kilcolmkill House, hard by. On the south shore of Helmsdale creek stand the ruins of the castle in which the nth earl of Sutherland and his wife were poisoned by his uncle's widow in 1567, with a view to securing the title for her only child who was next of kin to the earl and his son. Ardvreck Castle, now in ruins, at the east end of Loch Assynt, was the prison of the marquis of Montrose after his defeat at Invercarron (1650), whence he was delivered up by Neil Macleod of Assynt for execution at Edinburgh. In the graveyard of the old church of Durness is a monument to Robert Mackay/called Rob Donn (the brown), the Gaelic poet (1714-1778).

In the eighteenth century the Highland Clearances began in earnest in Sutherland: the forceful eviction of people from their homes by the landowners to make way for large sheep farms. Sutherland suffered more than most parts of the Highlands, scattering people far and wide across the globe, and was led in this by its biggest landowner, the Duke of Sutherland.[1] The clearances also saw many forced to move from their inland homes to live along the coast scraping a life as fisherfolk. It was the villages produced by this policy that formed the last Gaelic-speaking communities to be found on the east coast of Scotland, as discovered by Nancy Dorian in the early 1960s, and there are still some native speakers of the East Sutherland dialect of Gaelic in this area.

Today there is substantial and emotionally argued controversy about the Clearances, and the statue of the Duke of Sutherland has been threatened by activists. Those who condemn him accused the Duke of something like genocide and of destroying a way of life. To defend him, it is said that Sutherland, a poor land unfitted for the plough, was congested and unable to support its people as things stood.

Much of the county is still a poor relation to the rest of Britain with few job opportunities beyond government funded employment. Further education is provided by North Highland College, part of the University of the Highland and Islands. The Ross House Campus in Dornoch was the first establishment in the United Kingdom to provide a degree in Golf Management.

Owing to its isolation from the rest of the country, Sutherland was reputedly the last haunt of the native wolf, the last survivor being shot in the 18th century. However, other wild life has survived, including the golden eagle, sea eagle and pine marten amongst other species which are very rare in the rest of the country. There are pockets of the native Scots Pine, remnants of the original Caledonian Forest. 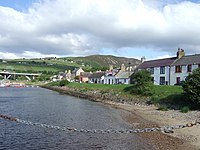 There are no large towns in Sutherland. Such towns and villages as there are may be found chiefly around the coasts and the valleys which feed their rivers into the Dornoch Firth. These coastal villages until very recently made much of their living from the rich fishing of the waters around the British Isles.

The main places are:

In M C Beaton's Hamish Macbeth mystery series, the fictional towns of Lochdubh and Strathbane are located in Sutherland. (The like-named television series was based on the title character though little else and was filmed elsewhere.)