Blair Atholl is a small town and parish in Perthshire, built about the confluence of the River Tilt and River Garry in one of the few areas of flat land in the midst of the Grampian Mountains. The town is situated in the south of the parish which extends to the borders of Inverness-shire and Aberdeenshire. The town as it is seen today was largely laid out from the beginning of the nineteenth century, replacing an older village, known as Old Blair.

The name is from Gaelic: from blàr menaing 'field' or 'plain', while Atholl, is the name of the Highland district where it stands. (It has been suggested that 'Atholl' means "New Ireland".)

In 2008, Blair Atholl and surrounding villages were included in the Cairngorms National Park, in response to requests from the town and in the hope of increasing the number of visitors.

The town is bypassed by the A9 and has a railway station on the Highland Main Line. The main road north from Perth to Inverness ran through the village until it was bypassed since 1984. 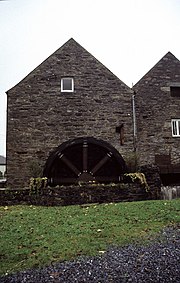 Until the early 19th century the only building on the site of the present village was the Old Mill (open to the public in summer). It began to grow around the present parish church, largely as a planned settlement, when this was moved from Old Blair. The building of the main A9 North Road and railway line to Inverness encouraged the growth of the village, though the A9 has bypassed it since the 1980s.

The Atholl Country Life Museum in the village has displays on the social history of the area. Open in summer (entrance charge).

A peculiar quirk of the town is ownership of the water supply. As a result of an unusual legal agreement made in 1911 for the benefit of steam trains, the responsibility for the public water supply to the people of Blair Atholl has been held by the railway companies who own the line through Blair Atholl, currently Network Rail. In April 2006, it was announced that Network Rail would finance the cost of connecting the Blair Atholl and Bridge of Tilt to Scottish Water's supply.[1]

Blair Atholl's most famous feature is Blair Castle (NN865662), one of the premier stately homes of the Highlands, and the last castle in the British Isles to be besieged, which took place in 1746 during the last Jacobite Rebellion. The Castle was the traditional home of the Earls (later Marquesses, now Dukes) of Atholl, albeit that the current Duke is resident in South Africa.

The Duke of Atholl is the only person in the United Kingdom allowed to raise a private army. This army, the Atholl Highlanders, conducts largely social and ceremonial activities, and primarily consists of workers on the extensive Atholl Estates.

The oldest part of Blair Castle is Comyn's (or Cumming's) Tower, a small tower-house with immensely thick walls, is claimed (perhaps dubiously) to date from as early as the 13th century. The majority of the Castle is 16th century in date, though much altered. The current mediæval appearance of the castle is as a result of Victorian alterations, when the mediaeval became fashionable.

The castle grounds contain extensive gardens developed by past Dukes of Atholl. 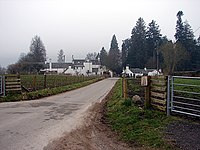 Old Blair is the original hamlet preceding the town of Blair Atholl as it stands today, which was laid out from the first half of the 19th century.

Old Blair stands within the Castle grounds (NN867666) and here is found the former parish kirk, which was the focus of the villageThe church was dedicated to St Bride and is a probable early Christian site. John Graham of Claverhouse, Viscount Dundee, 'Bonnie Dundee' was buried in the aisle attached to the now roofless church after the Battle of Killiecrankie, 27 July 1689. The modern railed burial enclosure of the family of the Dukes adjoins the ancient unenclosed churchyard. In the Middle Ages the main road from Atholl to Badenoch, and hence to the north, passed through this village and the Minigaig Pass.

Since its inception in 1946, the Blair Atholl International Scout Jamborette has been held every two years within the grounds of Blair Castle. It is a Scout Camp which is attended by scouts from across the globe and is usually attended by around 1200 participants.

The camp was the idea of Jack Stewart, International Commissioner for Scotland before and after the 1939/1945 war, who proposed a smaller international camp than a World Jamboree - a Jamborette.