The County of Cumberland is a claw-shaped shire commanding the mountains of the Lake District to the coast, stretching along the coast of the Solway Firth and the Irish Sea.

Cumberland is one of the "Lake Counties", along with Westmorland, these two counties being dominated by the high, harsh mountains of the Lake District, an area of spectacular natural beauty. Cumberland is a popular holiday destination, particularly for fell-walkers and those enjoying the scenery in a more sedentary way. The highest mountain in England is Scafell in Cumberland, Scafell Pike standing at 3,208 feet above sea level, though not far from the seacoast. Many of the highest and most famous of the fells lie in the county such as Skiddaw, Blencathra and Helvellyn, and the summits of several, including Helvellyn, form part of the county boundary with Westmorland.

Cumberland is bordered by six shires: Dumfriesshire, Roxburghshire, Northumberland, Westmorland, Lancashire and at its easternmost reach, County Durham. The county's bounds lie along the Irish Sea coast, the Solway and Liddesdale to the north and along the Pennines and through and among the Lakeland Fells. Dumfriesshire is separated for Cumberland by the Solway and the River Sark, the Scots Dike and the Liddel Water. Westmorland lies to the south, separated from Cumberland by high mountain peaks and Ullswater, while the Furness Fells of Lancashire are to the west, divided from Cumberland by the River Duddon.

Unlike neighbouring Westmorland, Cumberland is also an industrialised county, its west coast developed from the nineteenth century for ports, principally Whitehaven, coal mining, and iron mining in Millom. The ports and industry have greatly declined, but the nuclear power station at Sellafield remains the most important employer in western Cumberland.

Away from the industrial and post-industrial towns of the coast, Cumberland is predominantly rural. Its wild landscape of fells and dales sliced through by shining lakes, has provided inspiration for generations of British and foreign artists, writers and musicians.

Parts of Hadrian's Wall can be found in the northernmost reaches of the county. The wall's western end was at Burgh by Sands on the Solway and parts of the wall are found between there and Carlisle. 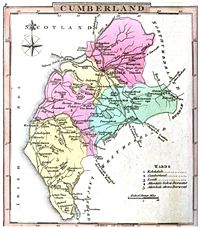 The county has five wards (the equivalent of a hundred or wapentake elsewhere): 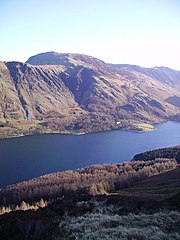 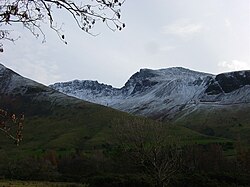 On the border with Westmorland 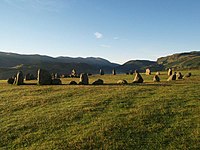 In the Iron Age, Cumberland appears to have been part of the lands of the Carvetii tribe, possibly part of the Brigantes', but the oldest signs on the landscape are far older; the Castlerigg stone circle on the hill above Keswick has been dated to the Neolithic or early Bronze Ages.

Cumberland was on the very edge of Roman power in Britannia. Carlisle was founded as a Roman town, Luguualium believed to be on a pre-existing site and the Roman road from the south came here. The Romans advanced into Dumfriesshire up Annandale, but it was in Cumberland that the Romans' northern frontier was set. The Emperor Hadrian had Hadrian's Wall built from 122, stretching from Bowness-on-Solway, north of Carlisle then eastward to the Pennines and ultimately to the Oceanus Germanicus at Wallsend in Northumberland. Evidence of a soldier's life on the Wall comes from the remains of such forts as Uercouicium (Housesteads) and Banna (Birdoswald) and in the writing tablets left behind there. From the fourth century Cumberland suffered repeated raids by tribes from north of the wall and Germanic auxiliaries were posted on the frontier. Ultimately Rome abandoned Britannia in 410 and left the native kings to look after their own.

In the early mediæval period Cumberland formed part of the British kingdom of Rheged. The language of Rheged was Old Welsh, recorded lovingly in the panegyric poems of Taliesin praising the kingdom's famous King Urien. The Britons took the name Cumbrogi (Welsh Cymry), which originally meant 'compatriots', possibly a translation of the Latin civites ("citizens").[1][2] From this we have the name "Cumberland". By the end of the 7th Century the land had been incorporated into the Anglo-Saxon kingdom of the Northumbrians, but later it fell to the Kingdom of Strathclyde. In 945 King Edmund "ravaged all Cumberland and granted it to Malcolm, King of the Scots on the condition that he be his fellow worker on sea and on land".[3] Whether this Cumbraland was today's Cumberland or all Strathclyde is uncertain, but at the time of Norman Conquest in 1066, Cumberland was ruled by Scotland, and so it is not found in the Domesday Book survey of 1086 other than entries for four small villages in the very south of the shire: Bootle, Kirksanton, Millom and Whicham.

From the Middle Ages until March 1603, Cumberland was a frontier county and a lawless county as border raiders from Dumfriesshire could flee with impunity across the border and raiders from Cumberland repaid in kind. These were the days of the reivers. Even in times of peace, the commissioners appointed by the kings of each kingdom could do little to bring order to the border. Carlisle Castle served as a prison, whose cells and gallows were busy dealing with the reivers who were caught, and with repulsing raids from reiver families seeking by arms to free their kinsmen.

A visible legacy of the reiver days are the Peel Towers, which are found throughout Cumberland and Westmorland. A peel tower is a fortified house or tower into which a landowner could withdraw during a raid, or into which a reiver could retreat when faced with the forces of the law.

On 24 March 1603, Queen Elizabeth I died and the Privy Council at once proclaimed the accession of King James VI of Scotland to the throne of England. After a last "busy week" in which the reivers sought to exercise their custom that the king's peace is suspended after the death of the monarch, peace was imposed at last. Law enforcement no longer stopped at the Scots Dike and a single commission under Lord Dunbar enforced the law for both sides of the border. Border laws were ended and the King renamed the border counties "The Middle Shires":

Those confining places which were the Borders of the two Kingdoms, where heretofore much blood was shed, and many of your ancestors lost their lives; yea, that lay waste and desolate, and were habitations but for runagates, are now become the Navel or Umbilic of both Kingdoms, planted and peopled with Civility and riches: their Churches begin to be planted, their doors stand now open, they fear neither robbing nor spoiling: and where there was nothing before heard nor seen in those parts but bloodshed, oppressions, complaints and outcries, they now live every man peaceably under his own figgetree, and all their former cries and complaints turned only into prayer to God for their King, under whom they enjoy such ease and happy quietness. King James I, in a speech to Parliament, 1607[4]

After the pacification of the borders, large numbers of families from Cumberland, Dumfriesshire and neighbouring shires settled in Ulster, and a great many surnames of the reiver families from those counties are now found there.

Cumberland after the union of the crowns remained a quiet, rural county in the early modern period. The industrial revolution brought rapid change to the coastal towns, spurred by coal, ports and in time the coming of the railway. The coastal towns grew into large industrial towns and Carlisle served as a railway hub for them.

This change barely affected the ancient fells however. Until Wordsworth, visitors were wont to draw down the blinds on the road passing the lowering mountains, borne on an ancestral fear of being benighted in an inhospitable terrain. However the success of William Wordsworth's poetry extolling the beauty of his native Westmorland effected a new way to look at the mountains. In the Victorian period the railways brought huge numbers of visitors and the idea of "the Lake District" was born. Arthur Wainwright in the twentieth century popularised fell-walking. The fells and dales still attract a huge number of walkers and tourists, maintaining the economy of the wild country while the industry of the coast has declined. 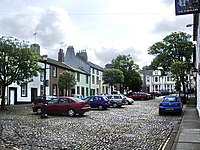 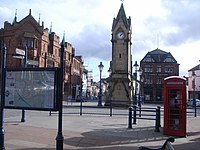 The main towns and villages of Cumberland are: 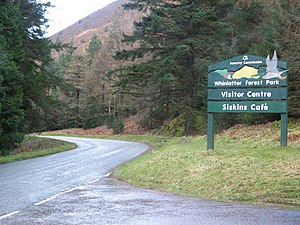 The entrance to Whinlatter Forest Park 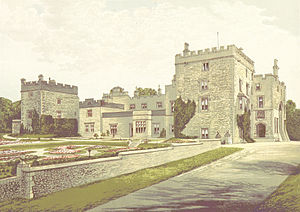 Outside the coastal towns, the largest industry in Cumberland is tourism. The Lake District National Park, spread over Cumberland, Westmorland and Lancashire is the single biggest draw; receiving in excess of 8.3 million visitors a year from across the United Kingdom[5] and the world.[5] Fewer than 50,000 people are permanently resident within the Lake District National Park across all three counties.[5]

Workington is home to the ball game known as Uppies and Downies, a traditional version of football, with its origins in Mediæval football or an even earlier form.[6] Players from outside Workington do take part, especially those from fellow West Cumberland towns such as Whitehaven and Maryport.[7]

Cumberland and Westmorland wrestling is an ancient and well-practised tradition in the two counties with a strong resemblance to Scottish Backhold.

In the 21st century Cumberland and Westmorland wrestling along with other aspects of Lakeland culture are practised at the Grasmere Sports and Show in Westmorland, an annual meeting held every year since 1852 on the August Bank Holiday.

The origin of this form of wrestling is a matter of debate, with some describing it as having evolved from Norse wrestling brought over by Viking invaders,[8] while other historians associate it with the Cornish and Gouren styles[9] indicating that it may have developed out of a longer-standing tradition.[10] 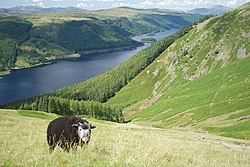