From Wikishire
(Redirected from Glen Rannoch)
Jump to: navigation, search 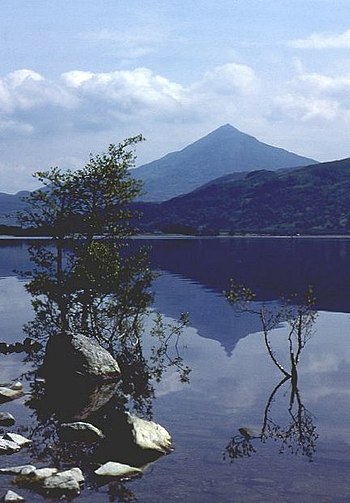 Loch Rannoch, with Schiehallion behind

Loch Rannoch is a large freshwater loch in Perthshire, nestled within the Highland landscape within Rannoch Moor.

The loch is over 9 miles long in a west-east direction with an average width of about 1,090 yards. It is fed at its eastern end by the River Tummel, and the River Gaur is disgorged in the west. The Tay Forest Park lies along its southern shore. The wild Rannoch Moor extends to the west of the loch, once part of the vast Caledonian Forest that stretched across much of the north; this is proven in part by the presence of Scots Pine stumps preserved in the boggy areas of the moor, and pollen records from peat cores.

The loch and surrounding areas have suffered from extensive deforestation and plantation of alien species. These practices have given rise to sections of dense tree plantations alternating with deforested areas.

The loch and surrounding area does, however, offer good sport fishing and walking.

The small village of Kinloch Rannoch lies at the eastern end of the loch, and a crannog (an ancient artificial island) with a folly on it can be found near its western end.

Loch Rannoch was used as a fictional racetrack in the videogame TOCA Race Driver 2.