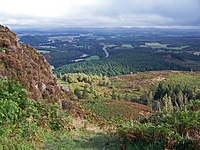 Birnam Wood and the Tay Valley

Birnam Wood is south of Dunkeld and the village of Birnam in Perthshire. It is situated on the west side of the River Tay, climbing from the bank of the river over the hills hemming in Strath Tay. Some ancient remains are found in the wood, including the earthworks of a fort.

The wood is famed for its appearance in Shakespeare's play Macbeth, The three witches give Macbeth a prophecy that:

Macbeth shall never vanquished be until
Great Birnam wood to high Dunsinane hill
Shall come against him.

In the final act, Malcolm's orders his men:

Let every soldier hew him down a bough
And bear ’t before him. Thereby shall we shadow
The numbers of our host and make discovery
Err in report of us.

Their numbers thus concealed in a mobile wood, they advance on the castle.

Whether this wood is intended as the 'Birnam Wood' of the play (Dunsinane is about 15 miles away) does not matter to the romantic imagination which has garlanded Birnam Wood with honours from the Victorian period when Strathtay was opened up to visitors.