From Wikishire
Jump to: navigation, search
Not to be confused with the Rannoch Ericht 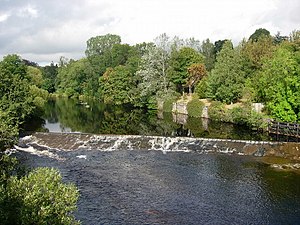 The River Ericht at Blairgowrie

The River Ericht is a river in Perthshire formed from the confluence of the rivers Blackwater and Ardle at Bridge of Cally.

The river runs south for around 10 miles before discharging into the River Isla, and eventually the River Tay. The river cuts through the impressive Craighall Gorge before separating the two towns of Blairgowrie and Rattray.

The fast running water of the river was once used to power several textile mills. Game fishing for salmon and trout is possible on some stretches with an appropriate license.