The County Palatine of Lancaster is a shire along the Irish Sea coast, stretching from the River Mersey in the south to the Furness Fells in the north.

Lancashire is a large and heavily populated county, in population second only to Yorkshire. It runs up the west coast from the Mersey north to Morecambe Bay with a further part north of the sands at Furness.

The County of Lancaster was first recorded in 1168 under King Henry II. In 1267 Edmund Crouchback was created 1st Earl of Lancaster. On 6 March 1351 Henry, Earl of Lancaster, was made a Duke and was also granted Palatinate powers - the royal powers, or the powers belonging to the palace.

Lancashire was at the heart of the Industrial Revolution, its cotton mills supplying the Empire and the World. Although competition and changed technology have swept many of the great mills away nevertheless Lancashire is still home to industrial might, and the great towns and cities which grew up in the eighteenth and nineteenth centuries still thrive.

See Category:Towns and villages in Lancashire

The largest towns of Lancashire include:

Away from the industrial and urban areas, Lancashire contains scenery of much beauty and jarring contrasts. The Furness district in the north sits on the sea at Barrow-in-Furness, a shipyard and industrial town. Behind Barrow though is a land of lakeland fells, forested and mountainous, forming part of the Lake District. Coniston Water, the west bank of Windermere lie in this part of Lancashire.

In the northern part of Lancashire's main body lies Lancaster itself, a modest county town tumbling charmingly down its hill from the Castle to the River Lune. Here the county is fairly narrow, the Pennine Mountains approaching the sea, and the Yorkshire boundary with them.

Between Morecambe Bay and the Ribble Valley, Fylde reaches westward, a broad, flat peninsula whose inland parts are farmland but whose coast is a string of holiday resorts centred on the best known of them all; Blackpool.

Lancashire broadens further south. The coast from the Ribble towards the conurbations of the south has more modest coastal resorts. Inland farmland begins to jostle with industrial towns, the latter becoming bigger and closer together until the great industrial conurbations of south Lancashire. In the southernmost part of the county are Liverpool and Manchester, two of the greatest cities in Britain, whose suburbs spread across not just Lancashire but into Cheshire too.

Liverpool, founded in 1207, was built around its vast docks from the Irish trade then the Atlantic and African trade routes. King John founded his new port at a marshy spot on the Mersey, at the point where the great gulf of the Mersey narrows again into a pinch before entering the Irish Sea. Now though great buildings stand on the waterside, the "Three Graces", and the city has spread all along the Mersey gulf and up the Irish Sea coast.

Manchester, now Britain's most populous city after London, is an older and a younger city; it was a town in Roman days and a fortress borough in Anglo-Saxon times, but it only became a town of national and indeed world significance in the Victorian period, as the heart of the manufacturing revolution. An inland city, its civic arms show a ship and the crest shows the world covered in bees; Manchester's industry reaching the world. The Manchester Ship Canal does indeed link Manchester to the oceans, by way of the Mersey.

The highest point of the county is Coniston Old Man in the Lake District at 2,634 ft.[1]

Lancashire rivers drain westwards from the Pennines into the Irish Sea. Rivers in Lancashire include the Mersey (which forms the border with Cheshire); the Ribble; the Wyre; and the Lune. Their tributaries are the Irwell; the Calder; the Darwen; the Douglas; the Hodder; and the Yarrow.

To the west of the county are the West Lancashire Coastal Plain and the Fylde coastal plain north of the Ribble Estuary. Further north is Morecambe Bay. Apart from the coastal resorts, these areas are largely rural with the land devoted to vegetable crops. To the north-west is the Arnside and Silverdale Area of Outstanding Natural Beauty, characterised by its limestone pavements and home to the Leighton Moss nature reserve.

Lancashire in the 19th century was a major centre of economic activity, and hence of wealth. Activities included coal mining, textile production, particularly cotton, and fishing. The port of Liverpool's 7½ miles of docks was the most advanced port system in the world. The docks enabled ship movements within the dock system 24 hours a day, isolated from the high River Mersey tides. Parts of the system are now a World Heritage Site. Despite its situation over 20 miles inland, the Port of Manchester was, between 1904 and 1964, in the top five most important custom ports in the United Kingdom. Barrow-in-Furness is famous for shipbuilding, with several Royal Navy flagships, the vast majority of its nuclear submarines as well as numerous ocean liners and oil tankers being built there. Preston Docks, an industrial port are now disused for commercial purposes. 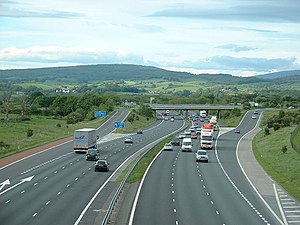 The M6 near Carnforth

The Lancashire economy relies strongly on the M6 motorway which runs from north to south, past Lancaster, Preston, Wigan and Warrington. The M62 trans-Pennine motorway runs from west to east from Liverpool past Manchester and on to Yorkshire. The M60 Manchester orbital motorway runs for the most part through the county, with its southern parts across the Mersey in Cheshire. The M55 connects Preston to Blackpool and is 11½ miles long. The M65 motorway from Colne, connects Burnley, Accrington, Blackburn to Preston. The M61 from Preston and the M66 from Edenfield connect to the M60/M62. The M58 connects Liverpool to the M6 at Wigan, while the M57 joins the latter to the M62.

Other major roads include the east-west A59 between Liverpool and Skipton in Yorkshire via Ormskirk, Preston and Clitheroe, and the connecting A565 to Southport; the A580 East Lancashire Road from Liverpool to Manchester; the A56 from Ramsbottom to Padiham via Haslingden and from Colne to Skipton; the A585 from Kirkham to Fleetwood; the A666 from the A59 north of Blackburn to Bolton via Darwen; and the A683 from Heysham to Kirkby Lonsdale via Lancaster.

Liverpool John Lennon Airport and Blackpool International Airport lie within Lancashire, although Manchester Airport, the main airport in the region, is situated in Cheshire.

Liverpool, Heysham and Fleetwood offer ferry services to Ireland and the Isle of Man. As part of its industrial past, Lancashire gave rise to an extensive network of canals, which extend into neighbouring counties. These include the Leeds and Liverpool Canal, Lancaster Canal, Bridgewater Canal, Rochdale Canal, Ashton Canal and Manchester Ship Canal.