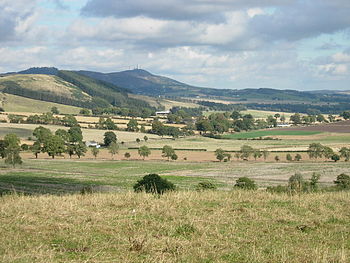 The south side of the Sidlaw Hills

The Sidlaw Hills are a range of hills of volcanic origin in two counties – Perthshire and Angus – that extend for 30 miles from Kinnoull Hill, near Perth, northeast to Forfar.

The origin of the name of the Sidlaws is uncertain. Law is a Scots word for 'hill' from the Old English hlaw. The element 'sid' is apparently the Gaelic sidhe, meaning 'fairy' or 'sacred', referring to the prehistoric cairns still visible on various of the hills (claimed in folklore as the habitations of supernatural beings) and bheanntan, 'peaks'. In Gaelic the hills are known as Na Sidhbheanntan.

The highest of the Sidlaws is Craigowl Hill. Other principal peaks within the Sidlaws include Ark Hill and King's Seat.

Beautifully coloured agates, which formed over millions of years in cavities (originally gas bubbles) in the volcanic lava which formed the hills, are occasionally to be found weathered out of the rock in the surrounding fields.

Sights and sites about hills 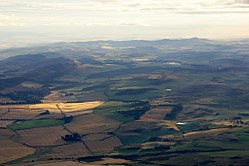 The hills from the air

Points of interest include Dunsinane Hill, a major location in Shakespeare's play Macbeth, and Auchterhouse Hill, which was the site of an ancient hill fort. The ruined observatory on Kinpurnie Hill was built by James Stuart-Mackenzie who owned the Kinpurnie estate and can be seen for many miles on the Strathmore side of the Sidlaws. There is a local legend that a poacher named David Gray lived as a hermit in the tower for seven years in order to win a £100 bet.

To the north is Glamis Castle, also a location of the action in Macbeth, and also the Eassie Stone, a carved Pictish cross slab-stone (now situated in a ruined church in the village of Eassie).[1]

Adjacent to Craigowl Hill is Gallow Hill, on the side of which is located the Angus transmitting station, which provides television and radio services to the region.