The County of Montgomery is a shire in the heart of the Welsh mountains.

The county is named after its county town, Montgomery, which in turn is named after one of William the Conqueror's counsellors, Roger de Montgomerie, 1st Earl of Shrewsbury. Its second town, where a great deal of county business was formerly done by reason of the mountainous terrain and poor communication across the shire, is Machynlleth. Although the county as such is a creation of the Middle Ages, it is of ancient origin, its borders corresponding roughly to the mediæval kingdom of Powys Wenwynwyn.

The county flower of Montgomeryshire is the corn spurrey (spergula arvensis).

Aside from its brush with Cardigan Bay, Montgomeryshire is an inland county, bounded to the north by Denbighshire, to the east and south-east by Shropshire, to the south by Radnorshire, to the south-west by Cardiganshire and to the west and north-west by Merionethshire. The county is almost wholly mountainous, although there are some fertile valleys on the Shropshire side. The highest point is Moel Sych (2,713 feet).

The principal rivers are the Severn flowing east and the River Dovey flowing west. Lake Vyrnwy is a reservoir supplying Liverpool in south Lancashire. The main industries are agriculture (mainly hill farming) and tourism.

The county's main towns are: 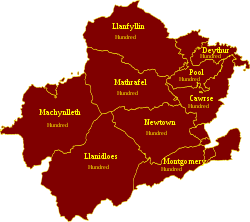 The hundred of Montgomeryshire

The hundreds of Montgomeryshire are: