Wiltshire is a county of the West Country. It is wholly landlocked and has borders with five other counties: Somerset to the west, Gloucestershire to the north, Berkshire and Hampshire to the east and Dorset to the south.

Wiltshire is characterised by its high downland and wide valleys. Salisbury Plain lies in the heart of Wiltshire, a vast open plain with few trees in which are found ancient remains such as the stone circles at Stonehenge and Avebury, and countless prehistoric barrows. The Plain is also the Army’s main training area in Britain.

The county town is the City of Salisbury in the south of the county, built around its soaring mediæval cathedral and mediæval streets. Important country houses dot the landscape and many National Trust properties.

The county, in the 9th century written as Wiltunscir, later Wiltonshire, is named after the former county town of Wilton,[1] itself named after the River Wylye, one of eight rivers which drain the county.

The name of Wiltshire is conventionally abbreviated to "Wilts". 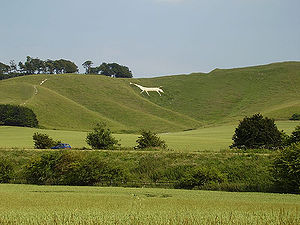 Two thirds of Wiltshire, a mostly rural county, lies on chalk, a kind of soft, white, porous limestone that is resistant to erosion, giving it a high chalk downland landscape. This chalk is part of the Southern England Chalk Formation that underlies large areas of Southern England from the Dorset Downs in the west to Dover in the east. The largest area of chalk in Wiltshire is Salisbury Plain, a semi-wilderness used mainly for arable farming and by the Army as training ranges.

The highest point in the county is the Tan Hill–Milk Hill ridge in the Vale of Pewsey, just to the north of Salisbury Plain, at 968 feet above sea level.

The chalk uplands run northeast into western Berkshire in the Marlborough Downs ridge, and southwest into Dorset as Cranborne Chase. Cranborne Chase, which straddles the border, has, like Salisbury Plain, yielded much Stone Age and Bronze Age archaeology. The Marlborough Downs are part of the North Wessex Downs AONB (Area of Outstanding Natural Beauty), a 668 square-mile conservation area.

In the northwest of the county, on the borders with Gloucestershire and Somerset, the underlying rock is the resistant oolite limestone of the Cotswolds. Part of the Cotswolds AONB is also in Wiltshire, in the county's northwestern corner.

Between the areas of chalk and limestone downland are clay valleys and river-cut valleys. The largest of these vales is the Avon Vale. The Avon cuts diagonally through the north of the county, flowing through Bradford on Avon and into Bath and Bristol. The Vale of Pewsey has been cut through the chalk into Greensand and Oxford Clay in the centre of the county. In the south west of the county is the Vale of Wardour. The southeast of the county lies on the sandy soils of the northernmost area of the New Forest.

Chalk is a porous rock so the chalk hills have little surface water. The main settlements in the county are therefore situated at wet points. Notably, Salisbury is situated between the chalk of Salisbury Plain and marshy flood plains. 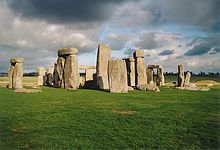 Wiltshire is notable for its prehistoric archaeology. The Mesolithic, Neolithic and Bronze Age people that occupied southern Britain built settlements on the hills and downland that cover Wiltshire. Stonehenge and Avebury are perhaps the most famous Neolithic sites in the United Kingdom.

In the Iron Age came the hill forts, most famous of them Old Sarum, a site fortified by the Ancient Britons, then by the Romans and by the Saxons who came after them.

In the 6th and 7th centuries Wiltshire was at the western edge of Saxon Britain, as Cranborne Chase and the Somerset Levels prevented the advance to the west. The Battle of Bedwyn was fought in 675 between Æscwine of Wessex and King Wulfhere of Mercia.[2] In 878 the Danes invaded the county. Between these events, Wiltshire remained at the heartlands of the West Saxon kingdom.

After the Norman Conquest, large areas of the country came into the possession of the crown and the church. Also at this time the bishopric of Sherborne was moved to Old Sarum. A cathedral was built on the narrow space of the hill and the town expanded around it. At the time of the Domesday Book the industry of Wiltshire was largely agricultural; 390 mills are mentioned, and vineyards at Tollard and Lacock. In the succeeding centuries sheep-farming was vigorously pursued, and the Cistercian monasteries of Kingswood and Stanley exported wool to the Florentine and Flemish markets in the 13th and 14th centuries.

By the thirteenth century, Salisbury was becoming over crowded and inconvenient, but at that time “Salisbury” was atop the hill now known as Old Sarum. New Salisbury (New Sarum) was begun in 1220 by the meadows the Bishop owned to the south; a new cathedral was built and a new town with it; this was the foundation of Salisbury as it is today.

In the 17th century English Civil War Wiltshire was largely Parliamentarian. The Battle of Roundway Down, a decisive Royalist victory, was fought near Devizes.

Around 1800 the Kennet and Avon Canal was dug through Wiltshire providing a route for transporting cargoes from Bristol to London until the development of the Great Western Railway.

The local nickname for Wiltshire natives is moonrakers. How this originated is subject to many conflicting tales. One tells of a villager seen one night drawing his rake across the village pond and when asked what he was doing he said he was trying to rake in the large round cheese floating there, though it was in truth a reflection of the full moon. The most popular a story extends the aforesaid tale to a band of smugglers who hid their untaxed brandy in kegs in a village pond. When confronted by the excise men they raked the surface in order to conceal the submerged contraband with ripples and claimed they were after the floating cheese, at which the excise-men took them for simple yokels or madmen and let them be. Many villages claim the tale for their own village pond, but the story is most commonly linked with The Crammer in Devizes.[3][4]

The Wiltshire economy benefits from the "M4 corridor effect", which attracts business, and the attractiveness of its countryside, towns and villages. The northern part of the county is richer than the southern part, particularly since Swindon is home to national and international corporations. Wiltshire’s employment structure is distinctive in having a significantly higher number of people in various forms of manufacturing (especially electrical equipment and apparatus, food products, and beverages, furniture, rubber, pharmaceuticals, and plastic goods) than the national average.

In addition, there is higher than average employment in public administration and defence, due to the military establishments around the county, particularly around Amesbury and Corsham. There are sizeable Army barracks at Tidworth, Bulford and Warminster, and further north RAF Lyneham is home to the RAF's Hercules C130 fleet. Wiltshire is also distinctive in having a high proportion of its working age population who are economically active – (86.6% in 1999–2000), and its low unemployment rates. The gross domestic product (GDP) level in Wiltshire did not reach the UK average in 1998, and was only marginally above the rate for South West England.[5] 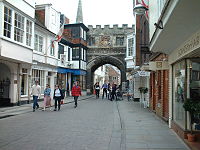 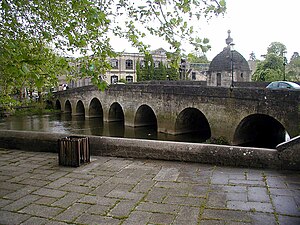 A bridge over the Avon at Bradford on Avon

Wiltshire has twenty-one towns and one city; Salisbury:

Information on civil parishes in Wiltshire is available at the Wiltshire and Swindon History Centre. This site includes maps, demographic data, historic and modern pictures and short histories. 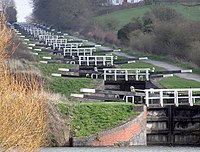 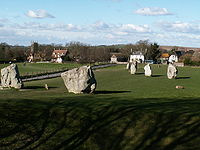 Places of interest in Wiltshire include 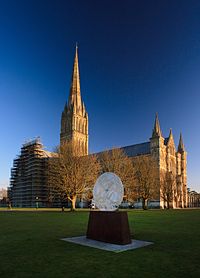