Luncarty is a village in Perthshire, approximately four miles north of Perth. It stands between the A9 to the west, and the River Tay to the east. 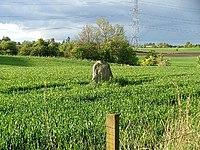 The historian Hector Boece (1465–1536), in his History of the Scottish People, records that, in 990, King Kenneth III of Scotland defeated the Danes near Luncarty.[1] The later historian John Hill Burton strongly suspected the battle of Luncarty to be Boece's invention.[2][3] but there is an earlier reference to it, by Walter Bower in his Scotichronicon[4] of around 1440, who refers briefly to the battle:

that remarkable battle of Luncarty, in which the Norsemen with their king were totally destroyed.

Bower does not quote any earlier sources for the battle beyond the usual mediaeval appeal to ancient writings he consulted.

The present village was founded in 1752 by William Sandeman, to house workers at his bleachfields.[5] The village formerly had a railway station, and the Perth to Inverness railway line still runs through the village.

William Sandeman and his partner Hector Turnbull manufactured linen in Perth and bleached it in Luncarty, for instance with an order of 12,000 to 15,000 yards of "Soldiers' shirting". In 1752 he leveled twelve acres of land in Luncarty to form bleachfields. By 1790 when William died, the Luncarty bleachfields covered 80 acres and processed 500,000 yards of cloth annually. Second only to agriculture, linen manufacture was a major industry in the late 18th century — linen then became less important with the introduction of cotton.[6]