Kenmore is a small village in Perthshire, in the Highland parts of the shire, where Loch Tay drains into the River Tay.

The village dates from the 16th century. It and the neighbouring castle were originally known as Balloch (from Gaelic bealach, 'pass'). The original village was sited on the north side of river approximately two miles from its present site and was known as Inchadney.

In 1540 Sir Colin Campbell of Glenorchy started the construction of Balloch castle on the opposite bank of the river and the entire village was moved to a prominent headland by the shores of Loch Tay, hence the name 'Kenmore', which translates from Scottish Gaelic as "big head". The village as it is seen today is a model village laid out by 3rd Earl of Breadalbane in 1760.

The Kenmore Hotel, commissioned in 1572 by the then laird Colin Campbell, has its origins in a tavern built around 70 years earlier offering accommodation and refreshments. It is reputed to be Scotland's oldest hotel. 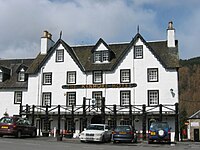 Taymouth Castle, another Campbell creation, was built by John Campbell, 2nd Marquess of Breadalbane (d. 1862) on the site of its late mediæval predecessor, Balloch Castle (built 1550 by the Campbells of Glenorchy, ancestors of the Marquesses of Breadalbane, demolished 1805). This enormous mansion, in neo-Gothic style, was completed in time for the visit of Queen Victoria in 1842. No expense was spared on the interior, which was decorated with the utmost sumptuousness. Taymouth Castle is now privately owned and has a fine golf course in its grounds. Plans to restore the Castle to its mid-19th century glory and convert it into a luxury hotel are currently ongoing. Kenmore Bridge dates from 1774 and the village as it is today was laid out in the 18th Century by the third Earl of Breadalbane. It retains many of its original buildings and historic appearance.

The Crannogs of Loch Tay, artificially created islands of which there are 18 in the Loch, are thought to have originated before 2000 BC, though they continued to be built and used as dwellings and refuges into the Middle Ages. The Crannogs not only afforded excellent protection against unruly neighbours but protected the folk of the glen from the wild animals such as wolves, lynxes and bears that once inhabited these fells.

The Scottish Crannog Centre, with an accurate full-size reconstruction of an Iron Age crannog, based on the Oakbank Crannog site (off the north shore of the Loch), and a visitor centre displaying finds from the excavations, is open to visitors a little south of Kenmore village.

The biggest island in the Loch, known as the Isle of Loch Tay, or in Gaelic Eilean nam Ban-naomh, ('Isle of Holy Women'), is just north of Kenmore. It was the site of a nunnery in the 12th century and was the burial place of Queen Sybilla (d. 1122), wife of Alexander I of Scotland (1107–24). A castle was built on the island in the later Middle Ages. Much larger in area than the other crannogs, it is unclear to what extent this island is natural, or has been 'improved' over the centuries.