The County of Westmorland is a mountainous shire, with some of the grandest scenery of the land. It is bounded to the north and west by Cumberland, to the south and south-west by Lancashire and to the east by Yorkshire and County Durham.

Westmorland is England's most unspoilt county, almost entirely rural, dotted with small villages and modest towns in the dales, each looking up at the fells.

Between the fells lie the dales, and in many of them are found the beauteous lakes which make Westmorland and its western neighbour famous. The western half of the county is within the Lake District National Park.

The county is divided into four wards (the equivalent of a hundred or wapentake elsewhere):

Westmorland is one of the Lake Counties. It is divided in parts by the fells; in the north-west of the county runs the Eden Valley, where the county town, Appleby-in-Westmorland is found. Through Edendale runs the River Eden, producing a quiet, fertile dale, isolated by the fells each side. The Eden rises high on Mallerstang Common and flows through Kirkby Stephen prettily tripping down to Appleby-in-Westmorland. Below Appleby, near Temple Sowerby the Eden is joined by the Lyvennet, whose own little dale, now largely forgotten, once held the court of a powerful king, and at its head are ancient graves. The Eden finally leaves Westmorland soon after that.

East of Edendale are the Pennines and to the West are the great fells of the Lake District, with several famous peaks both within the county and forming its border with Cumberland to the west.

The head of Edendale is barred by mountains, which effectively divide the county's towns and villages into two parts, linked by one of the most famous roads is that over the Kirkstone Pass, a steep, bleak, sheer rock pass across the mountains between Ullswater and Ambleside, and the road over Shap to Kendal.

Southern Westmorland may be said to begin at Ambleside on the shores of Windermere. North-west of the town is the most celebrated part of the lake district by Rydal Water and Grasmere. This intensely picturesque area is Wordsworth Country, the home and inspiration of William Wordsworth, one of our finest lyric poets.

In the south, Westmorland touches the sea in the River Kent estuary as it enters Morecambe Bay. This point divides Lancashire into two. At the head of the Ken dale is Kendal, around which is a pleasant land of low hills. Westward is Windermere, which marks the boundary with the Furness district of Lancashire, the largest lake in England, though not the largest in the whole country.

The border between Westmorland and Cumberland is possibly the highest south of the Highlands. In the east it runs up the beck that becomes the River Tees to its source and at once down the Crowdundle Beck into Edendale and the Eden. Then up the Eamont it sunders Penrith in Cumberland from Eamont Bridge in Westmorland and to Ullswater, the second great lake of the fells. From Ullswater the border takes to the fells, climbing to the peak of mighty Helvellyn, Bowfell and across many peaks and ridges to the precipitous Wrynose Pass. There a stone marks where three counties meet; Cumberland, Westmorland and Lancashire.

From the Three shire stone, the border with Lancashire runs across the fells to Windermere and around that mighty lake toward the sea.

Westmorland has a tiny detached part in Lancashire, which forms part of Burton.[1] 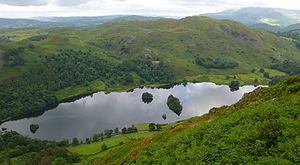 Shared with other counties are: 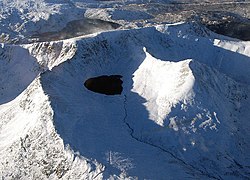 On the border with Cumberland

All of these highest fells stand in the western part of the shire.

Helvellyn is the highest fell in the shire and is shared with neighbouring Cumberland, providing the highest point on their boundary. From the Westmorland side of Helvellyn is Striding Edge, a long knife-edge ridge walk, famous for the challenge it presents to the bold and infamous for the deaths that have resulted. Striding Edge leads away from the summit of Helvellyn to the east. Once William Wordsworth, Sir Walter Scott and Sir Humphry Davy climbed Helvellyn and the Edge together; an unlucky wind could have lost three of the finest minds of the age in a moment.

The largest and most widespread industry in Westmorland is tourism, and the Lake District National Park is the single biggest draw; the whole Park receiving in excess of 8.3 million visitors a year from across the United Kingdom,[2] Europe, North America and the Far East.[2] Fewer than 50,000 people are permanently resident within the Lake District National Park and many of these are in Westmorland; Ambleside, Bowness-on-Windermere, Grasmere and Windermere.[2]

By the early sixth century, Westmorland was part of the Kingdom of Rheged, a stronghold of the native Britons against the incoming English. According to the poems of Taliesin, King Urien had a capital at Llywfenydd, identified as the River Lyvennet in Westmorland. Ancient burial mounds are found at the head of the Lyvennet.

By the end of the 7th century, Westmorland had been incorporated into the English kingdom of Northumbria. When Northumbria was smashed by Norwegian invaders from the ninth century, the fate of Westmorland is unknown. Many Norse place-names are found in the county now though, and the local words for the mountains and lakes, the fells and the waters (and indeed the word "fell" itself), are Norse.

During the later Middle Ages, Westmorland became a lawless place. It and its neighbouring shires were part of the reiver country, where robber families rover the lands raiding cattle, burning and pillaging and fleeing safely across the border back into Scotland, and Cumberland and Westmorland reivers returned the compliment. The Pele towers seen across Westmorland are the main visible legacy of these troubled times today left to us. The age of the reivers ended in 1603 with the accession of James VI of Scotland to the throne of England, which ended the significance of the border and allowed the King to make a ruthless pacification of the "Middle Shires".

In the early nineteenth century, William Wordsworth began to write. One of the greatest lyric poets, Wordsworth rose to become Poet Laureate. His poems extolling the beauty of his native Westmorland and indeed the neighbouring shires, brought visitors to see the lakes.

Cumberland and Westmorland wrestling is an ancient and well-practised tradition in the two counties with a strong resemblance to Scottish Backhold. The origin of this form of wrestling is a matter of debate, with some describing it as having evolved from Norse wrestling while other historians compare it with the Cornish and Gouren styles, suggesting an older origin.

In the 21st century Cumberland and Westmorland wrestling along with other aspects of Lakeland culture are practised at the Grasmere Sports and Show, an annual meeting held every year since 1852 on the August Bank Holiday. 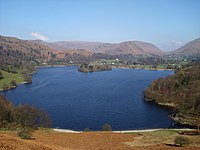