The County of Glamorgan is a maritime shire and the most populous county of Wales at over 1.3 million inhabitants as of 2013.

Glamorgan is a county of three contrasting localities. To the south east is the Vale of Glamorgan, an undulating limestone plateau,[1] mainly comprising farmland and small villages stretching from Porthcawl to Cardiff. The lowlands are geographically the best environment for agriculture of the three areas.[2] Settlements in the area include Cardiff, Barry, Bridgend, Cowbridge, Penarth and Porthcawl.

A Victorian map of Glamorgan

The northern part of the county is a mountainous area, dissected by deep narrow valleys. At the southern edge of the Brecon Beacons, the simple geological structure of Old Red Sandstone gives way to carboniferous rocks, limestone and millstone grit.[1] In the 19th century, industrial and population growth in the coal-bearing valleys of the Rhymney, Taff, Dare and Rhondda gave rise to a form of urbanisation characterised as ribbon development. The last deep mine, Tower Colliery at Hirwaun, closed in January 2008.[3] A few small drift mines like Unity Mine, formerly Pentreclwydau South, near Glynneath remain. Towns in the region include Aberdare, Caerphilly, Pontypridd, Maesteg, Merthyr Tydfil and Mountain Ash.

Further west is Swansea Bay and the Gower Peninsula, an Area of Outstanding Natural Beauty and the first such area designated in Britain.[4] Of all the areas, the Gower was the least affected by heavy industry and the ancient landscape was the least impaired.[2] The high ground that runs centrally through the Gower was largely uncultivated common land and its beaches and rocky coastal headlands showed little signs of the tourist trade[2] that played an increasing role on the local economy. The major settlements of the region include Swansea, Neath and Port Talbot.

The hundreds of Glamorgan

The county is divided into ten hundreds:

See Category:Towns and villages in Glamorgan 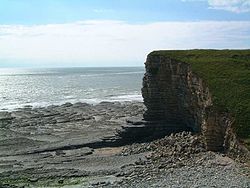 The coastline of Glamorgan stretches for 88 miles from Pengam in the east to the Gower in the west; taking in a three distinct districts of geographic characteristics.[5] The coast at the Vale of Glamorgan is mainly rock bound, while from Porthcawl to Swansea Bay the seaboard houses sandy shores. The final area, the Gower coast, is made up of a rugged and serrated peninsula.[6]

From the east the first major coastline feature is the Rhymney River which forms the border between Glamorgan and Monmouthshire. Heading west, the coast is an expanse of alluvial deposits stretching to the mouth of Glamorgan's most well known river, the River Taff.[6] Once marshland, the area was consumed by the rapid growth of the Cardiff Docks during the industrial revolution, but with the downturn in Glamorgan's iron and coal industries, the docks declined. Also flowing into Cardiff Docks is the River Ely, which separates Cardiff from the headland and seaside resort of Penarth in the Vale of Glamorgan.[6] Here the coast stretches southwards for two and a half miles from Penarth Head to Lavernock Point, hidden from vessels travelling up the Bristol Channel.[7] South easterly from Lavernock Point, roughly three miles out in the Channel Estuary is Flat Holm, an island which although geographically is within the Vale, is administered as part of the city of Cardiff.[8] Flat Holm is the most southerly point of Glamorgan and Wales.

From Lavernock Point the coast heads sharply west to the town of Barry, a well-known seaside resort, Barry is most notable for its rapid expansion during the late 19th century to become an important dock, at one stage surpassing Cardiff Dock for the tonnage of coal exported. Passing the cliffs of Barry Island the coastline becomes a low-lying promontory called the Lays,[9] which continues west taking in the villages of Rhoose and Aberthaw before reaching Breaksea Point, the most southerly point of mainland Wales. Beyond the point is Limpert Bay, which is overlooked by the village of Gileston and the ancient encampment of Summerhouse Point. Here the cliffs rise and run for eleven miles as far as the estuary of the River Ogmore.[9] Along this run of cliffs the coast passes Llantwit Major and St Donats, before heading in a rough north west direction at Nash Point.[9] 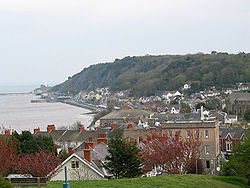 The coastline remains cliffs until after Dunraven Head, where the cliff face drops away to expose Southerndown Beach. Two miles beyond the Ogmore river runs out into a sand-locked bay which can been seen as commencing the second section of the Glamorgan coast,[10] as here the scenery undergoes an abrupt change; from a series of unbroken cliffs to vast regions of sandy beaches.[11] The Ogmore Bay at Ogmore-by-Sea is not only floored with sand but is also encircled with high wind-tossed sand hills, these impressive natural sand features are commonly known as the Merthyr Mawr sand dunes. Beyond the bay the underlying rocks emerge from the sand to form the promontory of Porthcawl Point.[11] Porthcawl town, once possessing a small dock, abandoned the trade in favour of tourism.[11] The coast continues north west as a low rocky formation for three miles to Sker Point, after which the sand line begins again, forming an arid wilderness all the way to Port Talbot.[11] Port Talbot was one of the later industrial towns of Glamorgan, and grew out of the mediæval village of Aberavon, a settlement built on the banks of the River Afan. To the west of the mouth of the Afan is the new district of Sandfields, built over the holiday dunes of Aberavon beach in the 1950s to house the workforce of Port Talbot Steelworks.[12]

The River Afan commences the wide sweep of Swansea Bay, which from Port Talbot arcs around taking in Baglan Bay, Briton Ferry, Swansea and ending in Mumbles. The whole bay is shut in by high hills and is thickly encircled with sands.[11] Within the bay are two of the major estuaries of Glamorgan; from Port Talbot the first is the River Neath, which is protected by long breakwaters.[11] The second is the River Tawe, the central river of Swansea. Beyond the Tawe the bay sweeps for six miles before reaching Mumbles Head, its most westerly point.[13] Mumbles Head is served by Mumbles Lighthouse, which sits on the further of two small islands off the head.

At The Mumbles, the coastline begins its third phase, commencing the wild and rugged cliffs of the Gower. From Mumbles Head to Worms Head, 20 miles to the west, the coast consists of a series of precipitous cliffs, interrupted by a number of sandy bays. The most notable of the bays include Langland Bay, Caswell Bay, Pwlldu Bay, Three Cliffs Bay and Oxwich Bay. Three Cliffs Bay and the adjoining Oxwich Bay are overlooked by three mediæval defences, Pennard Castle, Penrice Castle and Oxwich Castle, all three now ruinous. Oxwich Bay ends in the large wooded promontory of Oxwich Point,[14] which leads west to the beach front villages of Horton and Port Eynon. From Port Eynon Point, a five-mile stretch of wild and impressive cliffs[14] leads to Worm's Head and the western termination of the peninsula. This rock face is pierced in places by caverns, the most notable being Culver Hole[14] a bone cave near Port Eynon Point.

Worm's Head is one of the stand-out features of the Glamorgan coastline, a long narrow ledge of limestone, projecting into the sea, ending in a 200-foot-high wedge-shaped crag;[14] the Head takes its name from its resemblance to a dragon.[14] On the northern side of the Worm's Head is the village and Bay of Rhossili, a westerly facing bay that leads backwards to a series of downs, some of the highest land in the Gower.[15] Rhossili Bay ends in the northern formation of Llangenydd Burrows and the islet of Burry Holms.[15] The final stretch of Glamorgan coastline turns north east to form the Burry Inlet, a shallow and sand-choked estuary which leads to a tract of salt marshes which stretch to the mouth of the River Loughor.[15] The Loughor forming the border between Glamorgan and Carmarthenshire.

The Glamorgan flag is a banner of the arms of Iestyn ap Gwrgant, the last Welsh ruler of Morgannwg, a kingdom that once covered the territory of the county of Glamorgan. The design, featuring three silver chevronels on a red field, has appeared extensively in the arms borne by various civic administrations in the county including Mid Glamorgan Council, South Glamorgan Council, West Glamorgan Council and the Vale of Glamorgan Council. Additionally it is a prominent charge in the city arms and flag of Cardiff. In 2013 the design was promoted as a potential flag for the county by the Glamorgan History Society (GHS) in cooperation with the Historic Counties Trust. Having secured support for the proposed design from several other local bodies from across the county, the GHS formally requested its registration as the county flag from the flag Institute which was duly completed on September 24, 2013. 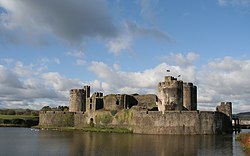