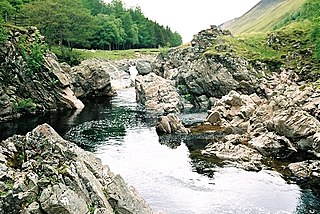 Glen Tilt is the glen of the River Tilt in the very north of Perthshire, amongst the mountains known as the Tarf and Tilt Hills. It is a deep, step-sided glen of rugged beauty.

A well maintained track runs up Glen Tilt, from Fenderbridge above Blair Atholl to the Falls of Tarf and a path leads further up from here to the head of the glen and up to Loch Tilt, a tarn just yards below the watershed which marks the border with Aberdeenshire. The path continues over the watershed and from here down into Aberdeenshire, to the Linn of Dee on the River Dee above Braemar.

The head of the glen is thus at the confines of Aberdeenshire, down which runs a little burn, the Allt Garbh Buidhe until the River Tarf enters the glen from the west. The Tarf forms some beautiful falls just above entrance to the glen.

The Tarf entering the glen and receiving the Allt Garbh Buidhe becomes the River Tilt. From here it flows southwest, the glen forming its characteristic rocky steepnes and depth, turning south at Gilbert's Bridge, where the sides of the glen become wooded.

Further down, close to the end of the river's course, the river receives the waters of the Fender, at Fenderbridge, another over which has some fine falls.

The attempt of George Murray, 6th Duke of Atholl to close the glen to the public was successfully contested by the Scottish Rights of Way Society.

Dominating the eastern sky in the lower glen is the massive bulk of Beinn a' Ghlò, a mountain with three summits each listed as a Munro: Càrn nan Gabhar (3,678 feet), Bràigh Coire Chruinn-bhalgain (3,510 feet) and Càrn Liath (3,199 feet).

Marble of good quality is occasionally quarried in the glen, and the rock formation has long attracted the attention of geologists.

One of the earliest geologists was James Hutton, who visited the glen in 1785 and found boulders with granite penetrating metamorphic schists in a way which indicated that the granite had been molten at the time. This showed to him that granite formed from cooling of molten rock, contradicting the ideas of Neptunism of that time that theorised that rocks were formed by precipitation out of water. Hutton concluded that the granite must be younger than the schists.[1][2] This was one of the findings that led him to develop his theory of Plutonism and the concept of an immensely long geologic time scale with "no vestige of a beginning, no prospect of an end."[3] Sir John Clerk of Eldin visited the site and produced geological drawings of the area, immediately upstream of the old Dail-An-Eas Bridge which has since collapsed but the abutments remain as a listed building.[4]