St Madoes (pronounced Saint May-Doe's) is a village and parish in south-eastern Perthshire, developed around Pitfour Castle. It is believed, however, that there has been settlements in the beginning of the century due to the discovery of several standing stones, as well as the St Madoes stone, a well preserved Pictish cross. It is located near Errol, between Dundee and Perth.

Local amenities at St Madoes include a small shop, two parks, a primary school and an 18th-century church built upon earlier remains. It is believed the original drawings for the church were made by the architect Robert Adam (1728-1792) as the design and layout is very similar to the only other known Robert Adam country kirk (Kirkoswald near Culzean Castle) with the most noted similarity being the gallery (or Laird’s Loft) on the back wall, facing the central pulpit. Adam also designed Pitfour Castle. Both buildings were funded by the laird John Richardson (1760-1821), a wealthy local man involved with the salmon fisheries of the Tay. Recently the village has started expanding due to the building of a large housing estate. 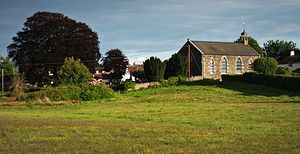