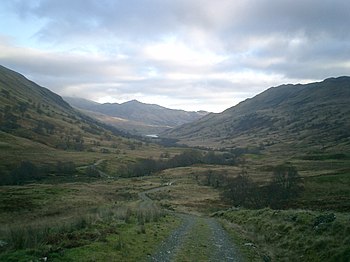 Glenfinglas (or Glen Finglas) is a glen in the Trossachs, in Perthshire. It is a forested area of renowned beauty in Highland part of the county, north of Brig o' Turk and close to Callander, in Menteith. To the west is Loch Katrine.

The name of the glen is Gaelic, in which it is known as Gleann Fhionnghlais.

The Glenfinglas estate was acquired by the Woodland Trust in 1996[3] and is open to the public. 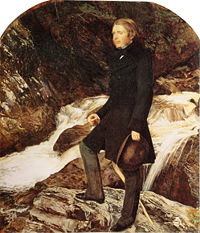 The leading Victorian art critic John Ruskin (1819–1900) and the Pre-Raphaelite painter John Everett Millais (1829–1896) spent the summer of 1853 together at Glenfinlas.[4] Millais started a painting of John Ruskin in front of a waterfall during the visit, which he finished the following year. The painting is held in the Ashmolean Museum in Oxford.

John Ruskin himself was especially interested in the rock formations and, although primarily an art critic, undertook his own studies of these.

The visit by Ruskin and Millais became infamous in later years, as it was here that Ruskin's wife Euphemia ('Effie') fell in love with Millais and shortly afterwards sued for her marriage to be annulled as Ruskin's 'impotency' had left the marriage unconsummated. The trial was a major society scandal. She married Millais soon afterwards.