The County of Caernarfon is a shire at the very north-west of Wales. Its name can also been spelled Carnarvonshire or in other variants, the spelling "Caernarfonshire" being taken from the Welsh form of the county town's name, which has become the preferred form.

It is a sparsely populated county, its land dominated by the mountain fastness and towns confined to the coastal lands. A large proportion of the population is Welsh-speaking.

Caernarfonshire may be reckoned to have three distinctive areas: the coastal lands (Arfon and the coast to the River Conwy), Snowdonia and the Llŷn Peninsula.

The county is bounded to the north by the Irish Sea, to the east by Denbighshire, to the south by Cardigan Bay and Merionethshire, and to the west by Caernarfon Bay and the Menai Strait, across which lies Anglesey.

The county has a largely mountainous surface. A large part of Snowdonia lies in the centre and south of the county, including Snowdon itself, the highest mountain in Wales at 3,560 feet. The north-west of the county is formed by the Llŷn peninsula, with Bardsey Island lying off its westernmost tip. The north of the county, between the mountains and Menai Strait, is a nearly level plain. The east of the county is part of Vale of Conwy, with the River Conwy forming much of the eastern boundary. Llandudno and Creuddyn forms a small peninsula to the north-east across the Conwy estuary.[1] The county has a detached part east of here, centred on Llysfaen, that also forms part of the hundred of Creuddyn.

The principal towns of the county are Bangor, Betws-y-Coed, Caernarfon, Conwy, Llandudno, Porthmadog and Pwllheli. Bangor is a university and cathedral city, seat of Bangor University and Bangor Cathedral.

The name of Arfon comes from its position opposite the Isle of Anglesey (Môn). Here the land is a flat, coastal plain but here stands also the county town, Caernarfon, whose name means "Arfon-fort.

Snowdonia (Welsh: Eryri) is the name given to the massif spread across the heart of Caernarfonshire and centred on Snowdon itself, the highest mountain south of the Forth. Snowdonia was formerly known as the Forest of Snowdon (at the end of the sixteenth century, William Camden noted Snowdonia as a name used by Latin scholars). The unrelated Welsh name is ancient.

Camden was greatly impressed by the Forest of Snowdon:

The Snowdonia National Park was created in 1951 to cover Snowdonia and a much wider mountain area of Caernarfonshire and Merionethshire.

Llŷn or Lleyn is the peninsula stretching out into the Irish Sea, shaped like an arm projecting from North Wales. Llŷn is a rural land of farms and villages, and largely Welsh-speaking. At its end is Aberdaron, the parish where R S Thomas served as vicar, and beyond the island of Bardsey.

From the end of the Roman period until the 13th Century, the land which became Caernarfonshire was at the heart of the Kingdom of Gwynedd, whose Kings claimed the title "King of Britain" until calamitous attempt to turn the title into reality in the late seventh century.

Gwynedd was finally put down by King Edward I but in the final rebellion Llywelyn ap Gruffydd retreated into Snowdonia, an impenetrable fastness. In response, King Edward built his "iron ring" of castles around Snowdonia, the most famous of which was Caernarfon Castle.

The county was originally created under the terms of the Statute of Rhuddlan in 1284 after Edward I had removed the last Welsh prince. It brought together the cantrefi of Llŷn, Arfon and Arllechwedd and the commote of Eifionydd (the northern portion of the cantref of Dunoding).[3]

In the early nineteenth century consideration was given to a new port to provide swift passage between Great Britain and Dublin, not least for Irish members of Parliament. One early proposal was to develop the fishing village of Porthdinllaen. Ultimately though the prize went to Holyhead on Holy Island, Anglesey, and in due course the first of the great bridges across the Menai Strait was built from Anglesey to Caernarfonshire, and Telford's road. This was followed by the railway and a new bridge over the Strait, all of which changed the nature of Arfon forever, as towns grew on the new transport routes.

In 1951 the Snowdonia National park was created, covering much of Caernarvonshire and Merionethshire. 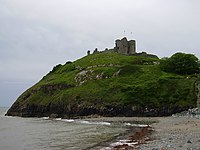