The County of York is by far the largest shire in the United Kingdom as well as the most populous. The northern boundary of Yorkshire is the River Tees, the eastern boundary is marked by the North Sea coast and the southern boundary the Humber Estuary and River Don and River Sheaf. The western boundary meanders along the western slopes of the Pennine Hills to again meet the River Tees. It is bordered by the counties of Durham, Lincoln, Nottingham, Derby, Chester, Lancaster and Westmorland. The county top is Mickle Fell at 2,585 ft.

Yorkshire is divided into three Ridings, whose boundaries meet at the walls of the City of York:

The City of York within the walls is thus the only part of Yorkshire not within one of the three Ridings. 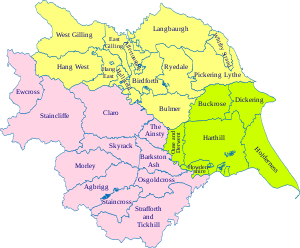 The Wapentakes of Yorkshire, coloured by Riding

The Ridings are divided into wapentakes, analogous to hundreds in other counties:

See Category:Towns and villages in Yorkshire

The largest towns of Yorkshire include:

Within the borders of the county are areas which are widely considered to be among the greenest in England, due to the vast stretches of unspoiled countryside in the Yorkshire Dales and North York Moors and to the open aspect of some of the major cities.[1][2] Yorkshire has sometimes been nicknamed "God's Own County".[3] The emblem of Yorkshire is the white rose of the royal House of York, which as displayed on a dark blue background forms the Flag of Yorkshire.[4] Yorkshire Day, held on 1 August, is a celebration of the general culture of Yorkshire, ranging from its history to its own dialect.[5] 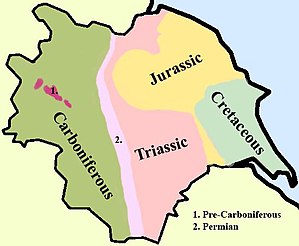 In Yorkshire there is a very close relationship between the major topographical areas and the geological period in which they were formed. The Pennine chain of hills in the west is of Carboniferous origin. The central vale is Permo-Triassic. The North York Moors in the north-east of the county are Jurassic in age while the Yorkshire Wolds to the south-seast are Cretaceous chalk uplands.

Yorkshire is drained by several rivers. In western and central Yorkshire the many rivers empty their waters into the River Ouse which reaches the North Sea via the Humber Estuary.[6] The most northerly of the rivers in the Ouse system is the River Swale, which drains Swaledale before passing through Richmond and meandering across the Vale of Mowbray. Next, draining Wensleydale, is the River Ure, which joins the Swale east of Boroughbridge. The River Nidd rises on the edge of the Yorkshire Dales National Park and flows along Nidderdale before reaching the Vale of York.[6] 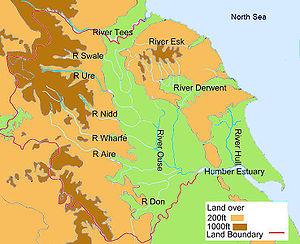 The main rivers of Yorkshire

The Ouse is the name given to the river after its confluence with the Ure at Ouse Gill Beck. The River Wharfe, which drains Wharfedale, joins the Ouse upstream of Cawood.[6] The Rivers Aire and Calder are more southerly contributors to the River Ouse and the most southerly Yorkshire tributary is the River Don, which flows northwards to join the main river at Goole. In the far north of the county the River Tees flows eastwards through Teesdale and empties its waters into the North Sea downstream of Middlesbrough. The smaller River Esk flows from west to east at the northern foot of the North York Moors to reach the sea at Whitby.[6] The River Derwent rises on the North York Moors, flows south then westwards through the Vale of Pickering then turns south again to drain the eastern part of the Vale of York. It empties into the River Ouse at Barmby on the Marsh.[6] To the east of the Yorkshire Wolds the River Hull flows southwards to join the Humber Estuary at Kingston upon Hull. The western Pennines are served by the River Ribble which drains westwards into the Irish Sea close to Lytham St Annes in Lancashire.[6]

The area of Yorkshire was unified under the name of the kingdom of Deira by King Edwin in AD 626.[7] In the 9th century the Danish settlers knew it as Jörvikskir. The Danes organised Yorkshire into wapentakes and the wapentakes into three areas which all met at the capital, Jörvik. These thirds were each called a thridjungr, which became thriding and ultimately Riding in English. The name Yorkshire first appeared in writing in the Anglo-Saxon Chronicle in 1065.

Following the Norman Conquest in 1066, Yorkshire was subject to the punitive harrying of the North, which caused great hardship. The county proved to be notable for uprisings and rebellions through to the Tudor period. During the industrial revolution, the West Riding became the second most important manufacturing area in the United Kingdom, while the predominant industries of the East and North Ridings remained fishing and agriculture. In modern times, the Yorkshire economy suffered from a decline in manufacturing which affected its traditional coal, steel, wool and shipping industries.

Yorkshire County Cricket Club is one of eighteen first-class county clubs within the domestic cricket structure. The club's limited-overs team is called the Yorkshire Vikings. Yorkshire teams formed by earlier organisations, essentially the old Sheffield Cricket Club, played top-class cricket from the 18th century and the county club has always held first-class status. Yorkshire have competed in the County Championship since the official start of the competition in 1890 and have played in every top-level domestic cricket competition.

Yorkshire play most of their home games at the Headingley Cricket Ground in Leeds. Another significant venue is at North Marine Road Ground, Scarborough, which houses the annual Scarborough Festival. Yorkshire has historically used other locations including Bramall Lane, Sheffield, which was the club's original home; Horton Park Avenue, Bradford; St George's Road Cricket Ground, Harrogate; The Circle, Kingston upon Hull; and Acklam Park, Middlesbrough.

The county has a very long tradition in the sport; it is officially recognised by FIFA as being the birthplace of club football as the world's oldest club Sheffield F.C. was formed in Sheffield during 1857.[8] Two men from Sheffield codified a set of rules for the game in 1857, these were known as the Sheffield rules and the Football Association rules which were created in 1863 were based in part on them. Ebenezer Cobb Morley was the first secretary of The Football Association, its second ever president and the man who drafted the FA's laws of the game at his home in Hull.

The world's first ever inter-club match took place on 26 December 1860 in Sheffield; the match was between Sheffield F.C. and a newly formed club named Hallam F.C.

The first winners of the newly formed league were Bradford-based team Manningham F.C. in 1895. Between 1896 and 1900 teams either played in the Yorkshire or Lancashire League depending on geographical location but still competed in the Challenge Cup. In the early years of the competition Huddersfield were the dominant force, winning multiple league titles between 1910s, and 1940s.

The Tour de Yorkshire is a road cycling race in Yorkshire, which started in May 2015. It is rated as a 2.HC event as part of the UCI Europe Tour. From 2015 to 2017 it was a three-day race but in 2018 it expanded to four days, starting on Thursday 3 May and finishing on Sunday 6 May.

The idea for the race arose as a legacy event following the significant success of the visit of the 2014 Tour de France to the county. The first two stages of the 2014 Tour, from Leeds to Harrogate, and York to Sheffield, were nicknamed Le Tour de Yorkshire.[9]