Schiehallion is a mountain in Perthshire, and one of the more famous peaks of the county for its beauty and its distinctive conical shape.

The mountain's summit stands at an impressive 3,553 feet above sea level, which makes it a Munro.

Schiehallion has a rich botanical life, interesting archaeology, and a unique place in scientific history for an 18th-century experiment in 'weighing the world'. The mountain's popularity amongst walkers led to erosion on its footpath and extensive repairs were undertaken in 2001.

The name 'Schiehallion' is an anglicised form of the Gaelic name Sìdh Chailleann, which translates as 'Fairy Hill of the Caledonians'. It is also known to some as 'The Maiden's Pap', or 'Constant Storm'.[1] 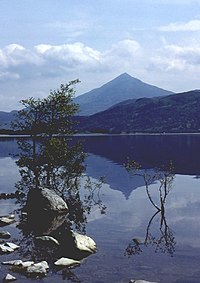 Schiehallion stands amongst the mountains between Loch Tay and Loch Tummel, 10 miles north of Aberfeldy in Perthshire. The mountain is distinctive in its position and grandeur; 3547 feet and is isolated from other peaks. It has an almost perfect conical shape from the west, which has led to the affectionate local nickname, "the Matterhorn of Scotland".

The view of the broad eastern flank is famed for its beauty and attracts many visitors to the shores of Loch Tummel. Queen Victoria came here for the view as have many since her days.

The slopes of Schiehallion are rich in botanical life, with heathers, mosses and blaeberry. Blanket bog and heather moorland change colour with the seasons. The limestone pavement provides nutrients, supporting plants including dog's mercury, lily of the valley and wood anemone.

The slopes of Schiehallion have been inhabited and cultivated since the first millennium BC until approximately two hundred years ago.[2] Schiehallion has been used for grazing sheep and stalking red deer.

Since 1999, the eastern side of the mountain has been owned by the John Muir Trust.[3]

Schiehallion viewed across the River Tummel

Schiehallion's isolated position and regular shape led it to be selected by Charles Mason for a ground-breaking experiment to estimate the mass of the Earth in 1774.[4] The deflection of a pendulum by the mass of the mountain provided an estimate of the mean density of the Earth, from which its mass and a value for Newton's Gravitational constant G could be deduced.

Mason turned down a commission to carry out the work and it was instead coordinated by Astronomer Royal, Nevil Maskelyne. He was assisted in the task by mathematician Charles Hutton, who devised the graphical system to represent large volumes of surveyed heights, later known as contour lines.[5]

The experiment was repeated in 2005 as an educational initiative led by scientific consultants Counting Thoughts.[6]

A Munro, Schiehallion is popular with walkers due to its accessibility, ease of ascent and spectacular views. An estimated 17,500 to 20,000 walkers made the ascent in 2000.[3] Most walkers start from the Forestry Commission car park at Brae of Foss, which lies just outside the boundary of the John Muir Trust estate. The route, which initially heads south-west before turning west to follow the main ridgeline of the hill, is about 4.5 km in length.

By 1999, when the John Muir Trust bought the estate, the main path had become exceedingly eroded by the passage of many thousands of walkers. The scar was visible from quite a distance. The organisation therefore decided to construct a new path, following a different line, better able to handle the pressure of visitors. 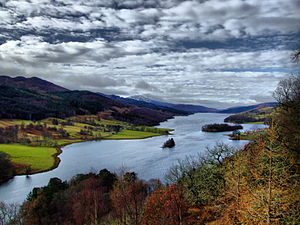 The name of the mountain has a poetic quality and distinctiveness that has led to its being borrowed in many odd contexts, for example: